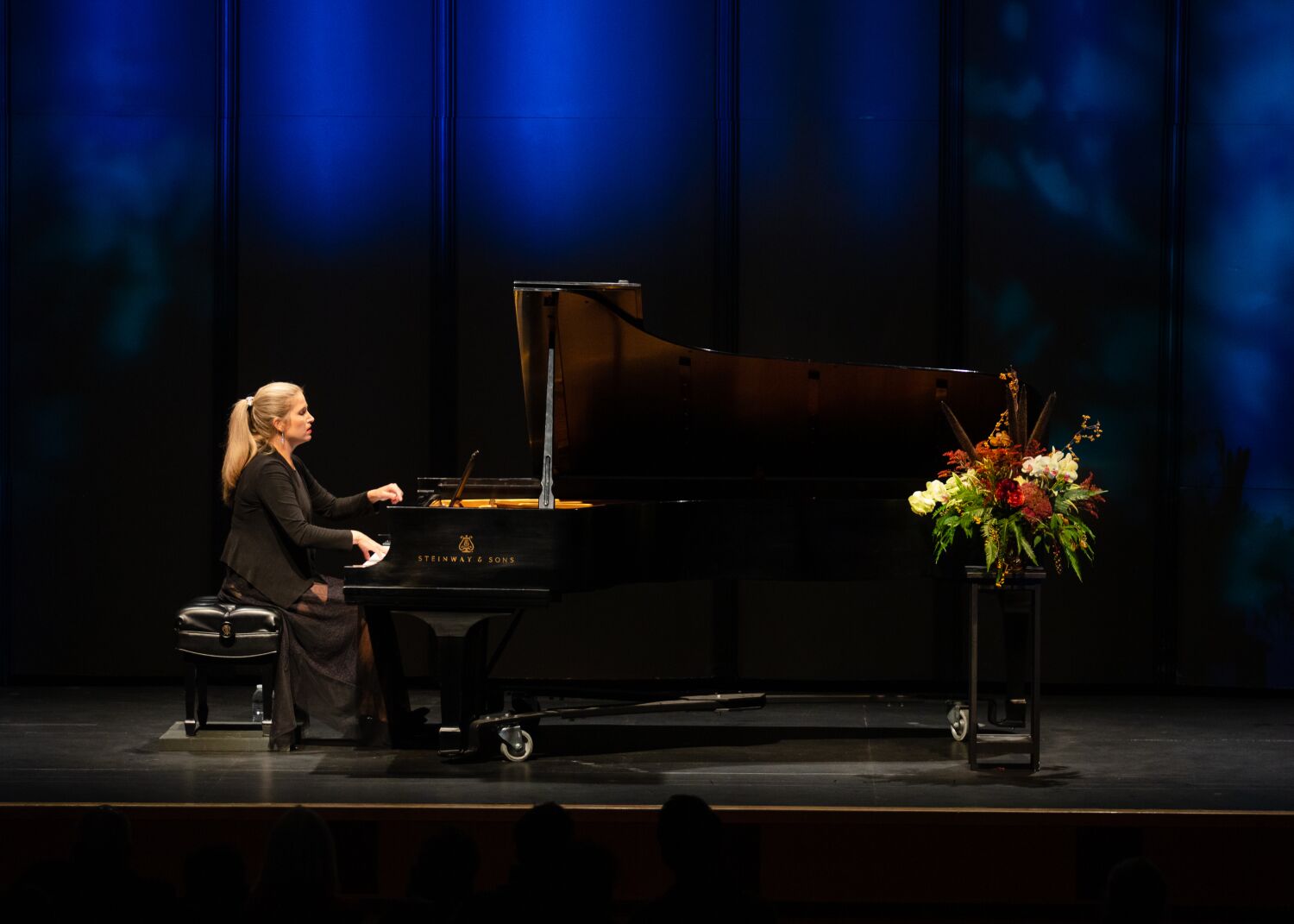 Pete Seeger’s legendary “We Shall Overcome” concert at Carnegie Hall in 1963, the event that signaled how indispensable music could be to inspire political reform in the 1960s, ended on an extraordinary climax. The eloquent, even definitive performance of the patriotic Cuban song “Guantanamera” made every syllable of José Martí’s poetry momentous. However, Seeger introduced the song by saying that “people” set one of Martí’s last poems to a popular tune. It wasn’t “People”, it was Julián Orbón.

Orbón is duly credited on the sleeve of the live recording of the concert. Maybe Seeger had a mistake in his thinking. Maybe he had a problem with Orbón. Perhaps there is only one Orbón issue that could explain why Julián Orbón de Soto, who was born in the Spanish region of Asturias in 1925, moved to Havana with his family in 1938 and, for many, what became the country’s most promising young composer, was unfairly turned into neglected.

That injustice was addressed Thursday night by the Los Angeles Philharmonic at the Walt Disney Concert Hall, the first concert of Gustavo Dudamel’s new Pan-American Music Initiative. The program ended with a rousing performance of Orbón’s “Tres Versiones Sinfónicas”. Orbón was just 28 when he wrote the score, giving it its uninspiring title, which describes it as merely three varied symphonic pieces.

Even in the Pan-American Initiative — which isn’t a festival but a broad, ongoing effort toward inclusion — Orbón seemed like an afterthought. The evening, which kicked off the LA Phil fall season, was to be devoted exclusively to Venezuelan, Mexican and Brazilian composers. But in a late change of direction, Dudamel instead conducted John Adams’ I Still Dance, Mozart’s Flute and Harp Concerto, as well as his Serenata Notturna and the Orbón.

As luck would have it, Venezuelan pianist Gabriela Martinez performed a fascinatingly original pan-American program on Saturday night’s Eli and Edythe Broad Stage, combining works by Venezuelan and Brazilian composers with more recent ones from the United States

Dudamel and Martinez raise the question of what it means to be Pan-American. Virgil Thomson defined American music as music written by an American.

Is Reynaldo Hahn’s “Portraits de Peintres” played by Martinez Venezuelan? The composer was born in Caracas and emigrated to Paris in his youth. These piano miniatures are musical impressions of four of Proust’s early poems about painters (Hahn and Proust were briefly lovers). On the surface they sound as French as Ravel, who was Hahn’s classmate. But they don’t sound like Ravel. It’s hard to tell if there’s a hint of Venezuelan influence in Hahn’s bubbling melodies and vibrant accompaniments, or if it just seems so, given Hahn’s origins.

“Tres Versiones” offers an intriguing rabbit hole of musical influences and identities to lose yourself in. The first movement, ‘Pavana’, opens with a melody by the Spanish Renaissance composer Luis de Milán, masterfully smashed by French horns and accented out of measure in the final notes, and ends with a punctuated koplandesque chord from the piano and harp. It was 1953, the year of Castro’s “History will absolve me” speech.

The Orbóns had fled the Spanish Civil War and Julián became a fervent early supporter of the Cuban Revolution. Gradually given the full Copland treatment, the Milán tune becomes almost a fanfare for the common Cuban.

The most amazing movement, the second, is entitled “Organum-Conductus”. It begins mystically with a vocal melody by the radical 12th-century composer Pérotin, who a dozen years later would become a seminal influence on Steve Reich and the development of American minimalism. Under Orbón’s hands, Pérotin takes on a symphonic frenzy, becoming ever more euphoric and boldly colored. The last movement, “Xylophone”, is an Afro-Cuban dance that is made exceptional by a large contingent of percussion.

Disillusioned with the Cuban Revolution, Orbón went to Mexico City in 1960. In the year of Seeger’s Carnegie concert he moved to New York and taught at Columbia University until his death in 1991. In New York he was considered a Spanish neoclassic. Dudamel made it excitingly clear that Orbón needs to be reconsidered as something of a pan-Hispanic-Cuban-American and neo-Medieval-Renaissance modernist.

Mozart’s Concerto for Flute and Harp may at first seem like a fitting neoclassical Pan-American fit, since the flute and harp are popular instruments in Latin, folk, pop, jazz, and classical music. Only Mozart hated both instruments. However, that did not prevent principal flutist Denis Bouriakov and principal harpist Emmanuel Ceysson from delivering a lively performance. Plus, Ceysson’s red art deco harp looks like it would have fitted in nicely in a 1950s Havana nightclub.

Adams’ I Still Dance was written in 2018 to celebrate Michael Tilson Thomas and his husband Joshua Robison. It was a prelude and helped launch MTT’s final season as the transformative music director of the San Francisco Symphony. The influences aren’t Latin (though there’s plenty of that in Adam’s beloved oratorio ‘El Niño’), but more in the spirit of Duke Ellington, with African and Japanese percussion, along with an electric bass guitar thrown into a blazing blaze orchestral mix that doesn’t stop for almost eight minutes.

Tilson Thomas conducted it as a kind of fantasy, a luminous vision of the ballroom. Everything is over very quickly. The rhythms are amazing. It takes a virtuoso ear to follow the score. But for Dudamel it wasn’t a fantasy. “I Still Dance” became “I Dance”.

The original LA Phil program would have ended with a Chôros No. 10 by Villa-Lobos. Instead, Tilson Thomas, who notably still conducts despite battling a brain tumor, will conduct it with the LA Phil in January. But Martinez filled the gap for now, ending her busy program with Villa-Lobos’ Bachianas Brasileiras No. 4 in its original piano version.

She is a remarkable pianist who has had a lot of attention but remains on the sidelines for mysterious reasons. Saturday was a return to the broad. She has performed with the Soraya and as a soloist with the Pasadena Symphony and the Pacific Symphony. It’s not hard to find on YouTube. But despite being a soloist for Dudamel in Venezuela, she has yet to perform with the LA Phil or at Disney Hall.

Based in New York and adapting to the new music scene, Martinez has recorded short tracks by Missy Mazzoli (Heartbreaker), Caroline Shaw (Gustave Le Gray) and Sarah Kirkland Snider (The Currents). All three ladies are in high demand and are played a lot. But they couldn’t have a better champion.

With cool determination, a tone rich in vibrant color and a seemingly effortless technique, Martinez brought Mazzoli’s miniature to a somber glow. A Chopin mazurka floated from shimmering chords in Shaw’s score, while Snider’s soft peal of bells was so majestic it almost sounded like electronic music. The melody in all three pieces has to be assembled note by note. Martinez did this by giving each individual note such substance that it gave the impression of capturing it from the air like a flying insect and pinning it to the piano so it could join the next.

The smash was Veil by Viet Cuong, a Vietnamese-American composer from LA who’s been getting a lot of attention lately (the Pacific Symphony just opened its new season with its percussion concerto Re(new)al). “Veil” is about just one note, a G sharp that chimes throughout, constantly changing depending on how it’s struck, how the strings are muted (Martinez played inside and outside the piano), and the harmonic context in which it’s played stands.

“Veil” wasn’t written for Martinez, but on a certain level it sounded like it had to be. Your touch is magical. She lifts the veil and reveals a sound world in G sharp, pure to the point where she has no nationalities and all nationalities. It opened everyone’s ears.

A magnificent performance of Villa-Lobos’ seductive “Bachianas Brasileiras” followed. This 20th-century Brazilian canalization of Bach naturally flowed from Cuongs Gis, leaving the impression that although the landscape varies, the Amazon, Rhine and Mekong Delta are all rivers and water is nourishing everywhere.

https://www.latimes.com/entertainment-arts/story/2022-10-03/pan-american-music-los-angeles-philharmonic-broad-stage Review: A new era for Pan-American music has arrived in L.A.