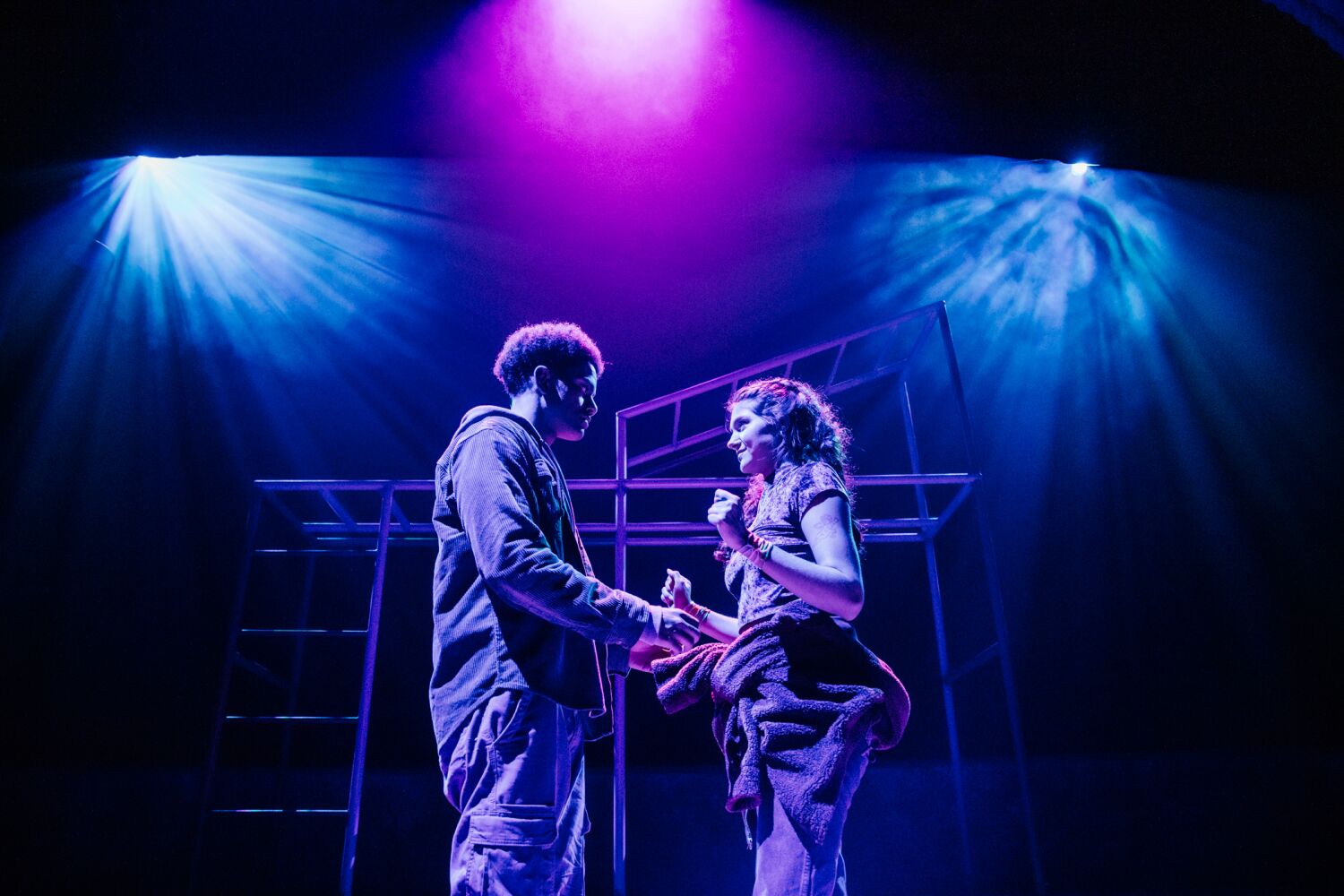 The nicest sound an audience can make in a theater isn’t applause or even laughter. It is the audible stillness of rapt attention.

You could literally hear a pin drop at the Los Angeles area premiere of “Sanctuary City” on Sunday at the Pasadena Playhouse. The deepened silence was the direct result of theatergoers being caught on every word spoken by characters whose stories they had grown fond of.

This tense, riveting play from Pulitzer Prize-winning author of Cost of Living, Martyna Majok, explores the plight of two young undocumented immigrants whose survival depends on one another. Simultaneously abstract and harrowingly real, the work focuses on the patterns of existence of those living in the shadow of citizenship.

The names and backgrounds of the main characters are not given. Majok, herself a Polish immigrant, notes in a note at the beginning of her script that these “characters grew up in multicultural, working-class America.” She demands that they not be played by actors of Western European descent, but leaves their identities open to “encourage broader, more inclusive casting for subsequent productions.”

Sanctuary City is set in Newark, New Jersey, in the aftermath of 9/11 when George W. Bush was President and the war on terrorism escalated dramatically. Sanctuary City is divided into two main parts. The first features a series of quick snapshots of the high school years of characters referred to on the show as G (Ana Nicolle Chavez) and B (Miles Fowler).

Majok composed this section in rapid bursts of dialogue, repeated and elaborated in staccato rhythm. Sampled in hip-hop style, G and B’s story jumps back and forth as a picture of their lives comes into sharper focus.

The enigmatic nature of the play is sometimes reminiscent of the experimental mode of the great British playwright Caryl Churchill. However, Majok does not attempt to explode our epistemological paradigms. Nor is it intentionally enigmatic. She simply wants theatergoers to take an active stance towards characters who have no choice but to hide.

Sanctuary City unfolds in glimpses and overheard remarks. Details flash before us, but the larger meanings must be deduced.

G appears on B’s fire escape without a winter coat. She is cold and needs a place to sleep. Her body is injured and she apologizes for leaving blood on his sheets.

It soon becomes clear that G’s stepfather is violent. B makes up excuses for G to miss school. The flu, a cold, chicken pox, the flu again. She cannot show up with visible traces because the teachers want to investigate and any confrontation with the authorities risks deportation.

B’s mother is planning to leave the US. The atmosphere since 9/11 has become ominous. She fears being arrested and doesn’t want to jeopardize her son’s future. But B is already giving up on college prospects despite being extremely smart. Undocumented, he is not eligible for federal financial aid. He sees no way for himself.

Newark is designated as a sanctuary city, but true sanctuary is only found when G and B are alone. Their bond intensifies after B’s mother leaves the country and G moves into the apartment. She brings home food from her restaurant shifts and they pool their money to cover the rent.

The relationship is intimate without being sexual, something G doesn’t quite understand as she curls up in bed next to B. Majok observes without explaining. Is trauma preventing B and G from consummating their love, or has teenage dependency pushed them into sibling roles?

Ignorance fuels our interest. There are surprises that seem perfectly explained in hindsight. But it’s better to go in without too much information.

The plot changes quickly after G announces that she and her mother have been granted citizenship. G has chosen to attend college in Boston, somewhat surprising given all the school she’s missed. B silently absorbs the information. He’s happy for her, but can’t help but mourn all the opportunities his undocumented status has robbed him of.

At the end of the first half, G goes to college with an engagement ring. Her relationship with B is still messed up, but the bond between them is so deep that the only way they can say goodbye is by proposing marriage as a solution to the disparity of their fates.

The production, which runs non-stop, brings the first half of the play to life on a darkened set framed by jungle gyms that are as theatrically playful as they are thematically captivating. Zi Alikhan’s concentrated staging leans on abstraction and lets the performers conjure up the maze of their dangerous youth through their heartfelt acting.

The actors never take a wrong step in this section. Chavez’ G can’t hide her scars. Her resilience is undeterred, but her capacity for joy has been stymied.

Fowler’s B wasn’t beaten in the same way, but his inner agony must eventually be confronted. When that moment comes late, the emotion flows in a silent stream.

The second half of the play features more visual realism. Chika Shimizu’s set design now evokes what Solomon Weisbard’s lighting was originally commissioned to do – the psychological backdrop of an untenable social reality.

A third character, Henry (Kanoa Goo), enters the picture. Years have passed, resulting in a somewhat contrived triangular calculus. Can love, no matter how selfless, bear the burden of B’s ​​risky legal status?

The play’s meticulous plausibility slips down a notch as this conflict escalates. The mood is Bergmanesque in its unrelenting intensity, but the playwright struggles to land the plane she has so far navigated so adeptly.

The ambiguity of the work’s poetic last movement is bewildering. Is it the rushing train of time we hear, or is it a hint of suicide? As excellent as Alichan’s staging was throughout, Majok flees without having to commit himself. Wishing to avoid a clapper, she lapses into gloomy vagueness. But the veracity of all that has gone before cannot be erased. And the plague of American sentimentality has been successfully sidestepped.

In plays like “Ironbound” and “Cost of Living,” Majok has spotlighted characters who have historically been relegated to the invisible fringes. Sanctuary City represents a major expansion of this noble project. The plight of the undocumented is portrayed with so much personal seriousness that it’s amazing how much we feel and how little we still know about the characters.

This is a play not to be missed by those interested in contemporary American drama—or by the millions of residents who yearn from the brig of their politicized limbo for the increasingly elusive American dream.

https://www.latimes.com/entertainment-arts/story/2022-09-20/review-sanctuary-city-pasadena-playhouse Review: ‘Sanctuary City,’ a tale of undocumented life, is a must-see