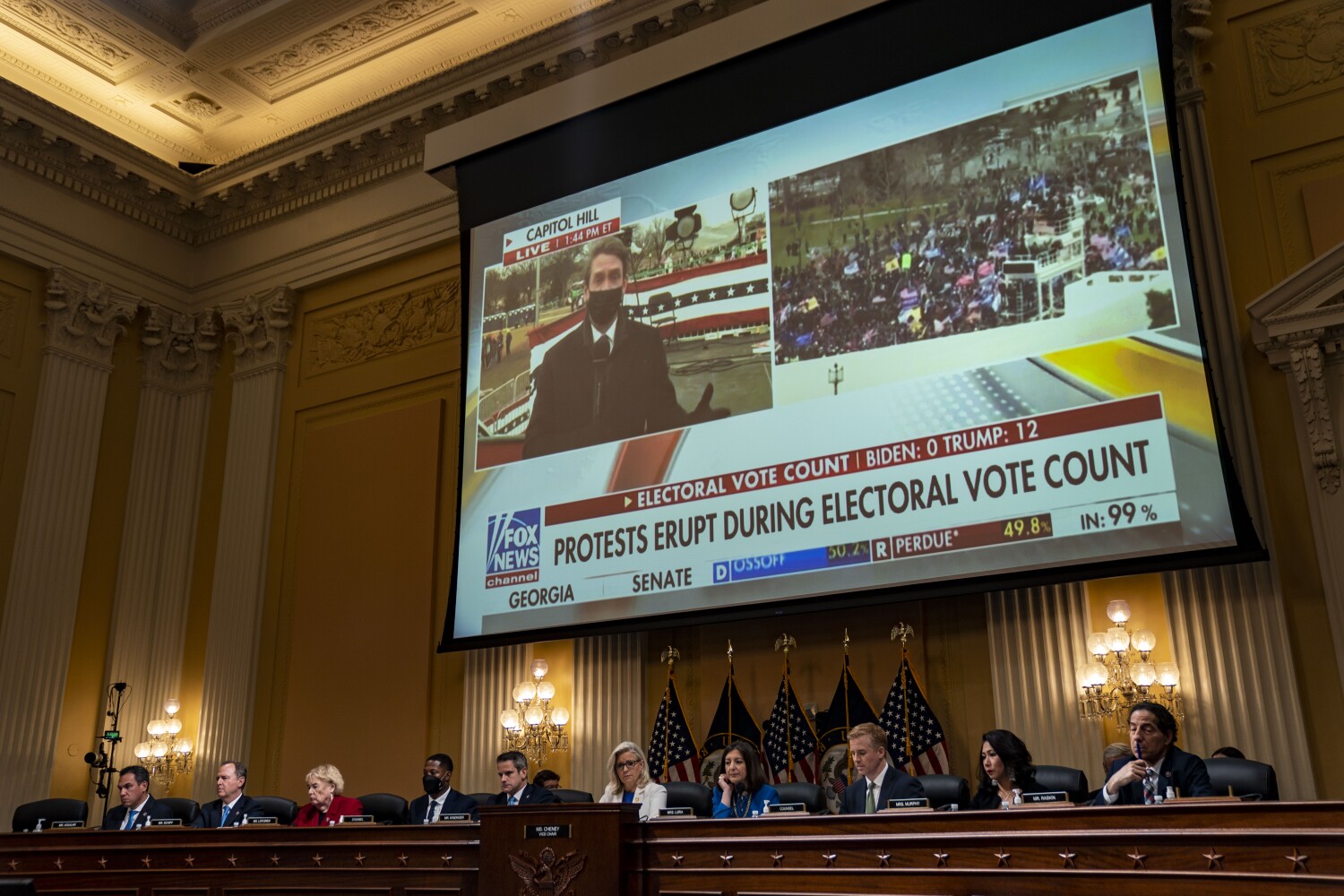 The season finale of the Jan. 6 committee hearings was a tour de force of emotion, violence, deceit and bravery that detailed the consequences of President Trump’s actions — or lack thereof — during the deadly attack on the Capitol.

Thursday’s prime-time live broadcast combined the first six weeks of the hearings with a powerful presentation focused on the former president’s dereliction of duty on Jan. 6, 2021.

In unflinching detail, the committee described the 187 minutes between Trump’s inflammatory Ellipse speech and his grudging appeal for peace from the Rose Garden, appealing to viewers’ traumatic memories of the day and giving them a behind-the-scenes look at his inaction as life at the seat of American democracy lost and threatened.

The hearing expertly resurfaced the hardship of one of the darkest hours in American history through a series of never-before-seen clips, chilling radio traffic and new testimony from former Trump advisers Matt Pottinger and Sarah Matthews, stitched together into a clear timeline, showing what Trump knew and when he knew.

One of the President’s strongest supporters, Fox News, was enraged against him in this vein, as were a host of his most ardent supporters, by a cowardly Senator Josh Hawley (R-Mo.), who ran from the building after an earlier attack in the Crowd to House Minority Leader Kevin McCarthy (R-Bakersfield), who feared for his life Jan. 6 following the evidence collected by the committee.

In statement after statement – not to mention text messages and other communiqués – witnesses who were once part of Trump’s inner circle all made it clear that the commander in chief was sitting from the safety of the dining room next to the Oval Office, watching Fox News, fully aware of the danger to former Vice President Mike Pence and others in the building, thanks to Fox’s own reporting on the ground. (The network notably failed to broadcast Thursday’s hearing live.)

Despite this, Trump never called for backup workers to secure the building and continued to let the mob run on Twitter. A floor plan of the west wing was even created to illustrate how easily Trump could have walked from the dining room to the briefing room to make a statement to the press.

Trump’s self-proclaimed skill as a master showman was also blown up when excerpts of his taped Jan. 7 address to the nation were produced at the hearing. The clips intended to condemn the riot instead showed him refusing to fully denounce the attack or the violent mob.

Raw footage showed him refusing to stick to the script: “I don’t want to say the election is over,” Trump says. “I just want to say that Congress confirmed the results.”

Perhaps even more embarrassingly, the clip revealed that a president who launched himself with the help of a reality show on television stumbled over the simplest of words as soon as the camera was on. “‘Yesterday’ is a hard word for me,” he said after blowing it several times. (Ivanka Trump can be heard on camera helping him; just take it out, she advises.)

The hearing was chaired by Vice Chair Liz Cheney (R-Wyo.), who took over after a taped introduction by Chair Bennie Thompson (D-Miss.). He missed the procedure after contracting COVID-19.

Most of the hearing was chaired by Rep. Adam Kinzinger (R-Ill.) and Elaine Luria (D-Va.), both military veterans, who referred to Trump’s betrayal of his oath of office to protect the country: “President Trump did it not not act. He has decided not to act,” said Kinzinger.

As Cheney himself pointed out, in the committee’s numerous interviews with senior law enforcement and military leaders, Pence’s associates, and DC government officials, no one claimed to have heard from Trump with orders to offer assistance during the attack.

In fact, the committee’s schedule showed that Trump called Sen. Tommy Tuberville (R-Ala.) to ask him to further delay proceedings, even though he knew Pence was trapped in the building.

A particularly stressful part of the hearing was the newly released audio recording of Secret Service agents guarding Pence as the mob flooded the Capitol corridors. Footage from security cameras inside the building showed protesters just yards from where the vice president was secured as his command spoke about closing the walls and fearing for their own lives – to the point, according to a source, that they called their families to say goodbye.

By foregrounding the horror felt by veteran security agents and his own supporters, the committee resurrected the intensity and horror of the attempted coup and fulfilled its promise to show the American people that Trump was not only involved in the creating and spreading the “Big Lie” but was also involved in the violence that followed.

Though this was originally supposed to be the grand finale of the hearings, the committee informed viewers that there would be a second season in September — or at least a reconvening of the committee’s public proceedings.

And based on the committee’s allusion to new information and new witnesses emerging from this round of hearings, Season 2 is poised to be just as full of betrayal, bravery, and intrigue as the first.

We flirted at Whole Foods. I was into his vibe.

Amy Schumer perplexed as she gets blamed for Tampax shortage

Kathy Hilton explains why she mistook Lizzo for ‘Precious’