After 18 years as the owner of the Phoenix Suns, Robert Sarver left many in the NBA with a story.

Some are bizarre, like when he placed a herd of goats in his CEO’s office. Some are off-putting, like his racially insensitive language and treatment of employees, detailed in an NBA investigation that concluded last week. Some are confusing, such as when other NBA owners watched him cut his nails on a Zoom call during a board meeting amid the pandemic, sources said, with the debris falling onto his dark shirt.

However, the final chapter on Sarver is about to be written.

He announced Wednesday that he plans to sell the Suns and Phoenix Mercury. At the start of a year-long suspension, Sarver is likely to disappear permanently from the league’s radar soon.

It relieves a major stress point when teams open a training camp where players will no doubt voice their feelings about the situation. But the eventual sale does not necessarily mean that the problem is gone.

Sarver is the third owner in the past eight years, after LA Clippers’ Donald Sterling in 2014 and Atlanta Hawks’ Bruce Levenson in 2015, to sell his team after racially insensitive incidents became public. 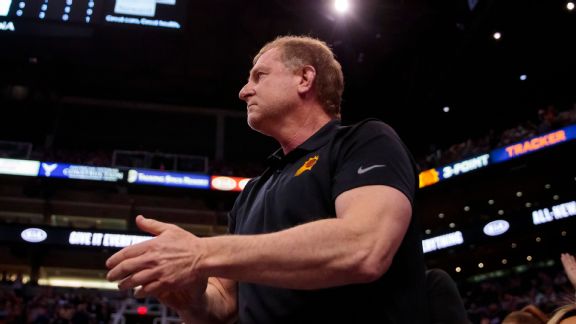 Nov 4, 2021: ESPN publishes his story about Sun’s owner Robert Sarver and the workplace culture in Phoenix.

Nov 4, 2021: The NBA launches an investigation into Sarver for racism and sexism.

11/30/2021: It remains uncertain whether Suns employees who have signed non-disclosure agreements will be able to participate in the investigation.

January 25, 2022: Suns is establishing a confidential internal employee hotline amid the investigation.

March 4, 2022: Sarver will speak to investigators as part of the NBA probe.

April 6, 2022: Commissioner Adam Silver told the Board of Governors meeting that the investigation was “certainly closer to the end than to the beginning”.

July 12, 2022: At the BOG meeting in Las Vegas, Silver says the investigation is in its “final phase.”

09/13/2022: The NBA announces the completion of its investigation, suspends Sarver for one year and fines him $10 million.

09/14/2022: At the BOG meeting in New York, Silver says Sarver’s behavior was “unjustifiable,” adding, “I didn’t have the right to take his team away.”

09/14/2022: LeBron James expresses his disappointment with the NBA’s decision on Sarver, writing, “Our league definitely got it wrong.”

09/21/2022: Sarver announces that he has started the sales process for Suns and Mercury

Player backlash added to the pressure that led to the league banning Sterling for life and increased the heat on Sarver to fold rather than serve his league-determined penalty.

“I’m so proud to be part of a league dedicated to progress!” LeBron James tweeted after Sarver’s announcement.

James and Suns star point guard Chris Paul expressed disappointment at the NBA’s initial punishment for Sarver — a one-year suspension and a $10 million fine — and pushed for a tougher sentence. So did NBPA executive director Tamika Tremaglio, who called for a lifetime ban. For his part, Golden State Warriors star Draymond Green called for a vote among owners to remove Sarver to force them to choose sides.

This well-timed, well-thought-out, and strategic use of influence, combined with fleeing sponsors, ultimately brought one of the League’s power-holders to justice. But it’s a disturbing statistic that 10% of the league has had to deal with such ugliness in less than a decade.

Sarver’s exit serves as an indication that tolerance for bad owner behavior has been tightened. The reactions sent a message: ignorance is no longer accepted as an excuse.

NBA Commissioner Adam Silver said he believes Sarver’s punishment is appropriate after the league’s long and exhaustive investigation found the repeated use of the N-word did not prove racist “animus.” The players who spoke out rejected that premise, and likely many others would have done the same when microphones were placed in front of them next week.

Silver, who acts largely as a mouthpiece for the owners, said he believes the penalties are fair given the “entirety of the circumstances, not just these particular allegations, but the 18 years Mr. Sarver has owned the Suns and Mercury.”

Those who spoke also rejected this and made it clear: bad deeds are bad deeds – no matter how long ago they happened or what good things have come of them since then.

This seemed to hurt Sarver in particular, who defended himself when the initial allegations surfaced by listing his charitable giving and community work. He did so again on Wednesday when he announced his team was up for sale.

“But in our current unforgiving climate, it has become painfully clear that that is no longer possible — that whatever good I have done or might do is outweighed by things I have said in the past,” Sarver wrote.

Though he did it with gritted teeth, Sarver swallowed the reality that behavior that had been tolerated for so long was being declared unacceptable.

This is an evolving new reality, a world where there is an electronic paper trail to almost everything, where the risk of discovery is constant in legal proceedings, where emboldened employees previously muted by fear or non-disclosure agreements are speaking out .

Is this the end of this trend? Are there others? Currently in so-called productive working discussions between players and owners, can the NBA recover from this painful episode?

These questions remain unanswered for the time being. But they’re the ones sitting directly behind the glow of the reaction to Sarver’s death. And this unknown is troubling at the highest levels of the League.

“I’d like to say we turned the corner,” Silver said last week. “We clearly haven’t.”

Chargers vs. Raiders: Betting odds, lines, picks against the spread

Qatar World Cup: Start times for every match and how to watch