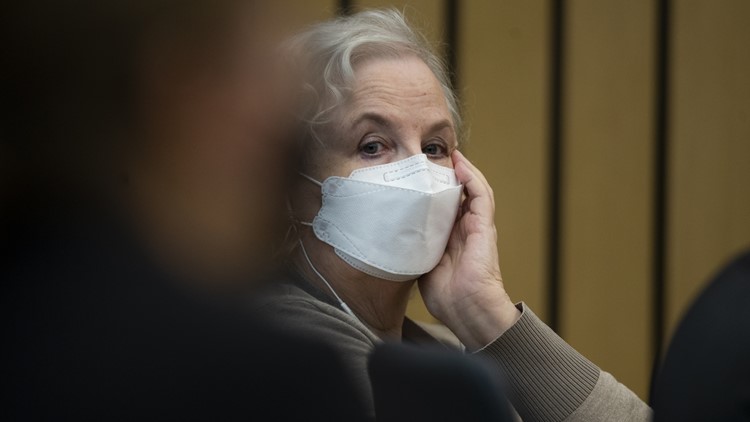 Crampton Brophy, 71, was found guilty of second-degree murder on May 25 after a trial that lasted more than seven weeks.

PORTLAND, Oregon – Self-published romance novelist Nancy Crampton Brophy was sentenced Monday to life in prison, with the possibility of parole after 25 years, for murdering her husband at his workplace in downtown Portland four years ago. A restitution hearing is scheduled for August.

Crampton Brophy, 71, was found guilty of second-degree murder on May 25 after a more than seven-week trial.

She was accused of shooting and killing her husband, 63-year-old chef Dan Brophy, on June 2, 2018 at the now-closed Oregon Culinary Institute at Southwest 17th and Jefferson Street.

Nathaniel Stillwater, son of Dan Brophy and stepson of Crampton Brophy, was one of several family members who made statements ahead of the sentencing.

“The pain you have caused us is immeasurable. Your theft of a parent and grandfather for such selfish reasons is unforgivable,” said Crampton Brophy’s Stillwater. “You were the wrong woman to borrow from your catalogue.”

“We will never understand how you can decide that taking our son’s life was to your advantage. That he didn’t deserve to live…” wrote Karen Brophy. “You will never know our beautiful great-grandchildren. Dan’s grandson. These children deserve to know and love him as we all do.”

A former student also spoke up.

“Chef Brophy will live on. He will live on in the hearts of all who knew and loved him and his memory will never die,” Clarinda said

Crampton Brophy’s case gained national attention when it was discovered that she had written an online essay entitled “How to Murder Your Husband” years before the murder. The judge ruled on the first day of the trial that the essay would not be admitted into evidence.

Crampton Brophy was arrested in September 2018 and pleaded not guilty to her only charge of second-degree murder before trial. The trial began on April 5 and was expected to last about six weeks, although it lasted longer due to a break midway after someone in the courtroom tested positive for COVID-19.

Prosecutors alleged that Crampton Brophy would gain a significant amount of life insurance money from her husband’s death and brought in several witnesses to support their claim that the Brophys were facing financial problems at the time of the murder.

Prosecutors also focused on surveilling a van believed to be Crampton Brophys that was seen near the Culinary Institute on the day of the murder. In closing arguments, the state hammered home the jury that Crampton lied to Brophy about her whereabouts that morning.

Prosecutors also focused on the weapon used in the murder. Prosecutors alleged that Brophy first researched and purchased a “ghost gun” kit online, then later purchased a Glock 17 pistol at the Portland Gun Expo and separately purchased another slide and barrel to match.

Portland Police Department detectives testified that the chute and barrel of the gun Crampton handed over to Brophy on the day of the murder were not used in the crime, but that police were unable to recover the extra chute and barrel used to kill them to compare with the bullets fired at the scene of the crime.

Prosecutors also called Andrea Jacobs, a former Crampton Brophy cellmate, to testify as a refuting witness. When prosecutors asked if she ever spoke to Crampton Brophy about how her husband died, Jacobs said, “Yes. She told me he was shot twice in the heart and she showed me the distance.” She said Crampton Brophy held out her arms and said, “It was about ​​that far.”

Jacobs told the prosecutor that Crampton Brophy initially started saying “I” instead of “it,” but that she appeared to have mispronounced and corrected herself.

The defense questioned Jacobs about her multi-year criminal history, including embezzlement, fraud and identity theft, and pressed Jacobs if she planned to use her testimony to her advantage. Jacobs admitted she had a pending request for a compassionate release from prison while speaking to detectives about Crampton Brophy, but denied deriving any benefit from the conversation.

In her own case, the defense argued that the prosecution’s evidence was circumstantial, denied the allegations of financial troubles, and contended that Crampton Brophy could not have killed her husband because they were in love to the end.

Crampton Brophy’s niece, Sarah Gitchell, testified that Crampton-Brophy and her husband appeared to have an ideal relationship and that Gitchell had spent a lot of time with Crampton Brophy after her husband was murdered.

“I personally watched her grieve, cry, sob and break down many times,” she said.

In her own testimony, Crampton Brophy said she misses her husband, calling him smart, clever, funny, kind and humble.

“It’s like you lost an arm. Like you’re just not as good as you were when you’re with him,” she said. “You were the best thing you could be when you were with him. Now it’s like, yes, I’m functioning, but something’s missing.”

She said the couple struggled financially from 2014 to 2017 but had a plan to sell their home and buy a smaller property to catch up on debt and mortgage payments, and that they bought as part of their life insurance policies for both retirement planning. She also said her research into spirit weapons is the preparation for a future novel.

Previous coverage of the Brophy study:

APRIL 1: The Oregon romance novelist accused of killing her husband, a cooking instructor, is on trial

APRIL 4: The romance novelist’s essay “How to Murder Your Husband” is thrown out of evidence on the first day of the murder trial

APRIL 11: The detective says he saw a van similar to that of accused killer Nancy Brophy on surveillance video in the area of ​​the crime scene

APRIL 14: ‘There wasn’t much rest in him’: Victim’s son appears in Nancy Brophy case

APRIL 21: Charges in Nancy Brophy’s trial are on hold after statements about the couple’s finances

APRIL 22: Novelist Nancy Brophy’s murder trial has been stayed after she tests positive for COVID-19

MAY 3: Potential rebuttal witness says Brophy told her she was ‘so far away’ from her husband when he was shot

MAY 9: The trial against the romance novelist continues with testimonies from her niece

MAY 13: Judge in Brophy trial hears arguments over whether to allow testimony from former cellmate

MAY 16: Nancy Crampton Brophy discusses financial struggles and research into “ghost guns” during testimony before a murder trial

23. MAY: The murder trial of romance novelist Nancy Crampton Brophy is nearing its conclusion

How do you save money on grocery shopping? We want to hear your tips