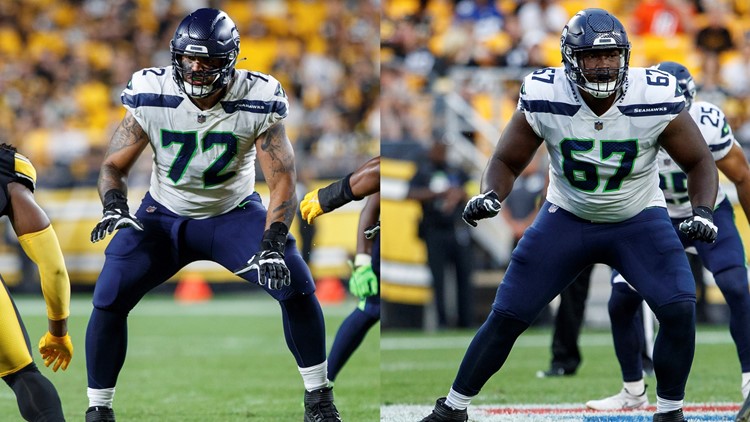 Perhaps it’s a sign of how much the Seattle Seahawks are likely to be counting on their two rookie offensive linemen to contribute immediately.

RENTON, Wash. (AP) — Perhaps it’s a sign of how much the Seattle Seahawks are likely to be counting on their two rookie offensive linemen to contribute immediately.

Several mornings during training camp, there were additional meetings on top of the normal meetings for Charles Cross and Abe Lucas to try to update the duo and prepare for what is to come in their first NFL season.

Think of it as an accelerated crash course.

“We have extra meetings with the rookies, me or (assistant offensive line coach) Keli’i (Kekuewa) will meet with them extra,” said Andy Dickerson, Seattle offensive line coach. “We have rookie meetings, but then sometimes he picks them up early in the morning, so you just keep passing them the information.”

It’s becoming increasingly clear that Seattle intends to lean heavily on its two rookie draft picks this season. Cross was Mississippi state’s No. 9 overall, the highest pick for the Seahawks since 2010, when they also drafted a left tackle — Russell Okung at No. 6 overall.

Lucas was Seattle’s third-round pick, a Washington State bullying right tackle that offers the Seahawks a pair of bookends to build around now and in the future.

Both saw significant playing time in last weekend’s preseason opener against Pittsburgh. And they are expected to face Chicago together on Thursday night.

“I guess it was nice just having that kind of mentality. I guess there’s a learning curve climbing with a guy my age who’s going through the same things,” Lucas said.

Cross was considered one of the best pass blocking offensive linemen in last year’s draft, but run blocking was the question. The same question lingered with Lucas since both had played in Mike Leach’s offensive systems during their college days.

In the first test against an opponent, both would have done well against the Steelers, said Seattle coach Pete Carroll on Tuesday.

“We did a lot of stuff with Charles, he had a lot of frontside stuff, ordered his block on almost every play in the running game,” Carroll said. “What was really exciting was seeing Abe on the back. Abe had some dominant blocks.”

While it’s clear Cross will be the starter in the left tackle, having taken virtually every first-team snap in the offseason and training camp, Lucas finds himself in contention with Jake Curhan entering his second season.

Curhan and Lucas seemed to split up the reps for the first few weeks of camp. Lucas got the most time on the No. 1 offense during Seattle’s first scrimmage. Curhan was the starter in the preseason opener against Pittsburgh, but Lucas perhaps had the better performance, albeit against lesser competition.

Lucas will likely start on Thursday as Curhan missed Tuesday’s practice due to back cramps.

“It’s really good stuff. It’s no different than what we saw,” Carroll said. “That’s the cool thing. These guys practiced and played the same way.”

Seattle rookie RB Ken Walker III is struggling with a hernia and the goal is hopefully he’ll be ready by the season opener, Carroll said. Walker had five carries for 19 yards in the preseason opener against Pittsburgh. … Seattle is also aiming to have WR Marquise Goodwin (hamstring) back in time for the season opener.

Quarterback Drew Lock has tested positive for Covid-19. Lock had been working with the first team on Tuesday. The Seahawks used him for Thursday’s preseason game against the Bears. A ban is now out of the question.

He was ruled out for Thursday’s game against the Bears in Seattle.

Lock should be the starter for the Bears game. pic.twitter.com/FanEzOMILP

“At this point…. Just have another brawl”