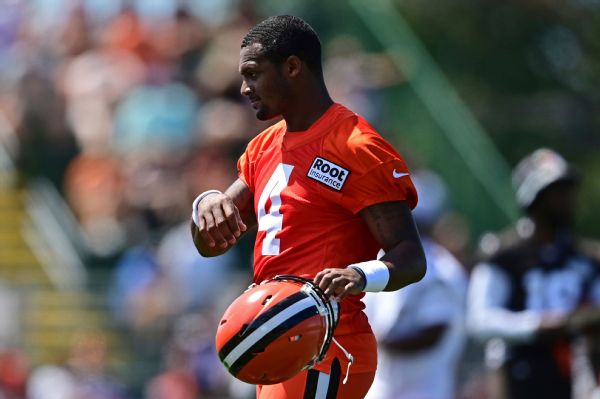 Ahead of Robinson’s decision, the NFL Players Association released a statement Sunday night saying the union and Watson “will stand by their decision” and called on the NFL to “do the same.”

“Prior to Judge Robinson’s decision, we wished to reiterate the facts of this proceeding,” the NFLPA statement said. “First, we have fully cooperated with every NFL investigation and provided the NFL with the most comprehensive information available for any personal conduct policy investigation. A former federal judge—appointed jointly by the NFLPA and the NFL—conducted a full and fair hearing. He read thousands of pages of investigative documents and examined arguments from both sides with an impartial eye.

“Every player, owner, business partner and stakeholder deserves to know that our process is legitimate and is not being clouded by the whims of the league office. Therefore, regardless of their decision, Deshaun and the NFLPA will stand by their decision, and we call on the NFL to do the same.”

Watson has been accused of sexual assault and inappropriate behavior during massage sessions in civil lawsuits filed by 25 women. The encounters cited in the lawsuits took place between March 2020 and March 2021 while Watson was a member of the Houston Texans. One of the 25 lawsuits was dropped after a judge ruled in April 2021 that plaintiffs would have to amend their filings to disclose their names. In June, Watson settled 20 of the 24 lawsuits he faced; The other four remain active and are on track to go to court next year.

Last month, the Texans reached settlements with 30 women who have made or were willing to make claims against the organization for their alleged role in the allegations against Watson.

Robinson heard arguments from the league, the union and Watson’s attorney during a three-day hearing in her home state of Delaware in late June. The NFL was pushing for a suspension of at least a year, while the NFLPA and Watson’s attorney argued that the quarterback shouldn’t be suspended at all. The sides discussed a possible settlement until the end of the hearing, but failed to reach an agreement.

Although two Texas grand juries earlier this year declined to seek criminal charges against Watson, the NFL has been investigating for last year whether he violated its personal conduct policy. The NFL interviewed Watson for several days earlier this summer. League investigators also spoke to several of the women.

Watson has always denied any wrongdoing and said he has no regrets about his actions during the massage sessions. Watson also said he was cooperating with the NFL’s investigation and “truthfully answered every question” put to him by league investigators.

The Browns traded for Watson in March, sending three first-round draft picks to the Texans. Cleveland then handed Watson a new five-year, $230 million fully guaranteed contract, the richest deal in NFL history for a player.

Browns coach Kevin Stefanski said last week that Jacoby Brissett would become Cleveland’s starter if Watson were suspended. The Browns were off training camp on Sunday but are scheduled to return to training on Monday.