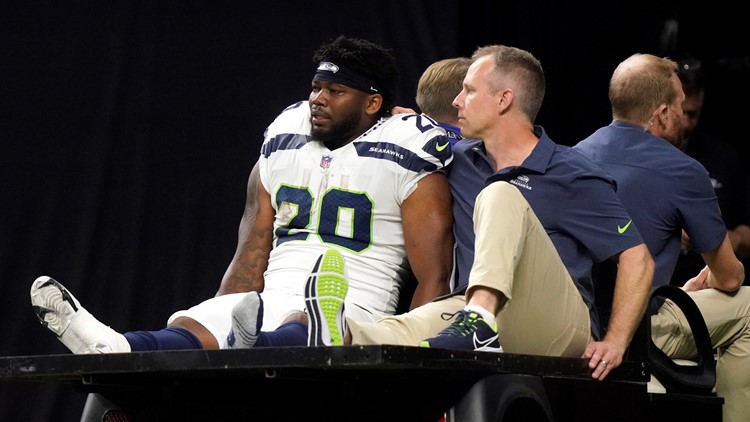 SEATTLE — The Seattle Seahawks will be without Rashaad Penny for the remainder of the season after sustaining a fractured fibula in the lower left leg in Sunday’s loss to New Orleans.

The Seahawks too tweeted Monday morning that Penny “suffered a season-ending ankle injury” during Sunday’s game.

Penny was injured early in the third quarter when he was tackled from behind near the touchline on a 6-yard run. He eventually reached the touchline without putting weight on his leg and was taken to the dressing room by a trolley.

The break is another in a frustrating series of injuries that have plagued Penny’s career.

Penny has had to deal with multiple muscle injuries that have cost him games, but the cruciate ligament rupture he suffered late in 2019 cost him the majority of the next season.

Rashaad Penny sustained an ankle injury at the end of the season.

Penny was finally showing consistent flashes of the talent that made him a first-round pick late last season, rushing for at least 130 yards in four of his last five games. Penny started this season slowly but rushed for 151 yards and two touchdowns in Week 4 against Detroit. Penny was averaging 6.8 yards per carry on Sunday before he was injured.

With Penny out, the primary running burden will fall to rookie Kenneth Walker III. Walker had 88 yards on eight carries against the Saints, but most of that came on a 69-yard touchdown rush in the fourth quarter.

Matthew Stafford back slinging passes and title talk for Rams