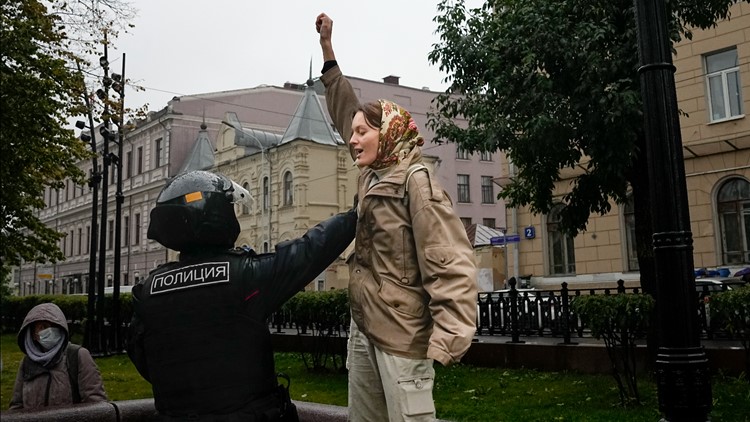 A young woman climbed onto a bench and shouted, “We’re not cannon fodder!” before the police took her away.

According to OVD-Info, an independent website that monitors political arrests in Russia, police arrested more than 700 people, including over 300 in Moscow and about 150 in St. Petersburg. Some of the people arrested were minors, OVD-Info said.

The demonstrations followed protests that erupted within hours on Wednesday after Putin announced he would call up experienced and qualified army reservists in a bid to bolster his volunteer forces fighting in Ukraine.

On Saturday, police were on duty in the cities where protests had been planned by the opposition group Vesna and supporters of the imprisoned opposition leader Alexei Navalny. They acted quickly to arrest protesters, most of them young people, before they could hold protests.

In Moscow, a heavy police contingent roamed a city center where a protest was planned in pouring rain and checked the IDs of passers-by. Officers rounded up those they thought were suspects and later distributed subpoenas to the arrested men.

A young woman climbed onto a bench and shouted, “We’re not cannon fodder!” before the police took her away.

Police arrested a man in a park just outside Red Square and took him away while others shouted “shame!”

Before being rounded up in St. Petersburg, a small group of demonstrators managed to briefly march down the main Nevsky Avenue while shouting “Putin to the trenches!”.

In the eastern Siberian city of Novosibirsk, over 70 people were arrested after singing an innocuous Soviet-era song praising peace.

People attempting to hold individual pickets, which are permitted under Russian law, were also arrested.

Swift police intervention followed Wednesday’s dispersal of protests, when over 1,300 people were arrested in Moscow, St. Petersburg and other cities.

Putin signed a hastily passed law on Saturday increasing punishment for soldiers who disobey officers’ orders, desert or surrender to the enemy.