From topless selfies to dazzling swimsuit shots, Salma Hayek shows off every part of herself to her fans. However, despite her openness, one thing we rarely see is a snap of herself and her beautiful-looking daughter Valentina. But recently, she shared a super rare update about her growing daughter and the video will warm your heart. 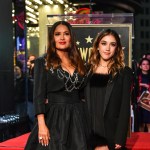 On May 10, Hayek posted a 15-second clip from her and daughter Valentina’s Vogue Mexico video for Mexican Mother’s Day.

She posted it with captions in both English and Spanish, saying, “Happy Mother’s Day to all the Mexican mothers and all the mothers around the world who are celebrating today. ! ¡Feliz Dia de la Madre a todas las madres Mexicanas ya todas las madres del mundo que celebran hoy! @voguemexico #happymothersday # felízdíadelamadre. ”

You can watch the video here.

In the video, they talk about a wide variety of topics, all in Spanish. Throughout the clip, we also see them hugging, cuddling, hanging out with designer bags and overall looking like the cutest mother-daughter duo out there.

Hayek called The Guardian back while promoting the movie Gucci house, that she appreciates having her daughter in her forties. She said, “You appreciate it more because, by the time you get there, you’ve overcome the fear that it might never happen… I was a little wiser.”

Before you go, click here to see the best photos of Salma Hayek with daughter Valentina Paloma Pinault.

Andor Should Have Made Mon Mothma Queer, and Still Can

10 Movies About Wedding Disasters (or Near-Disasters)