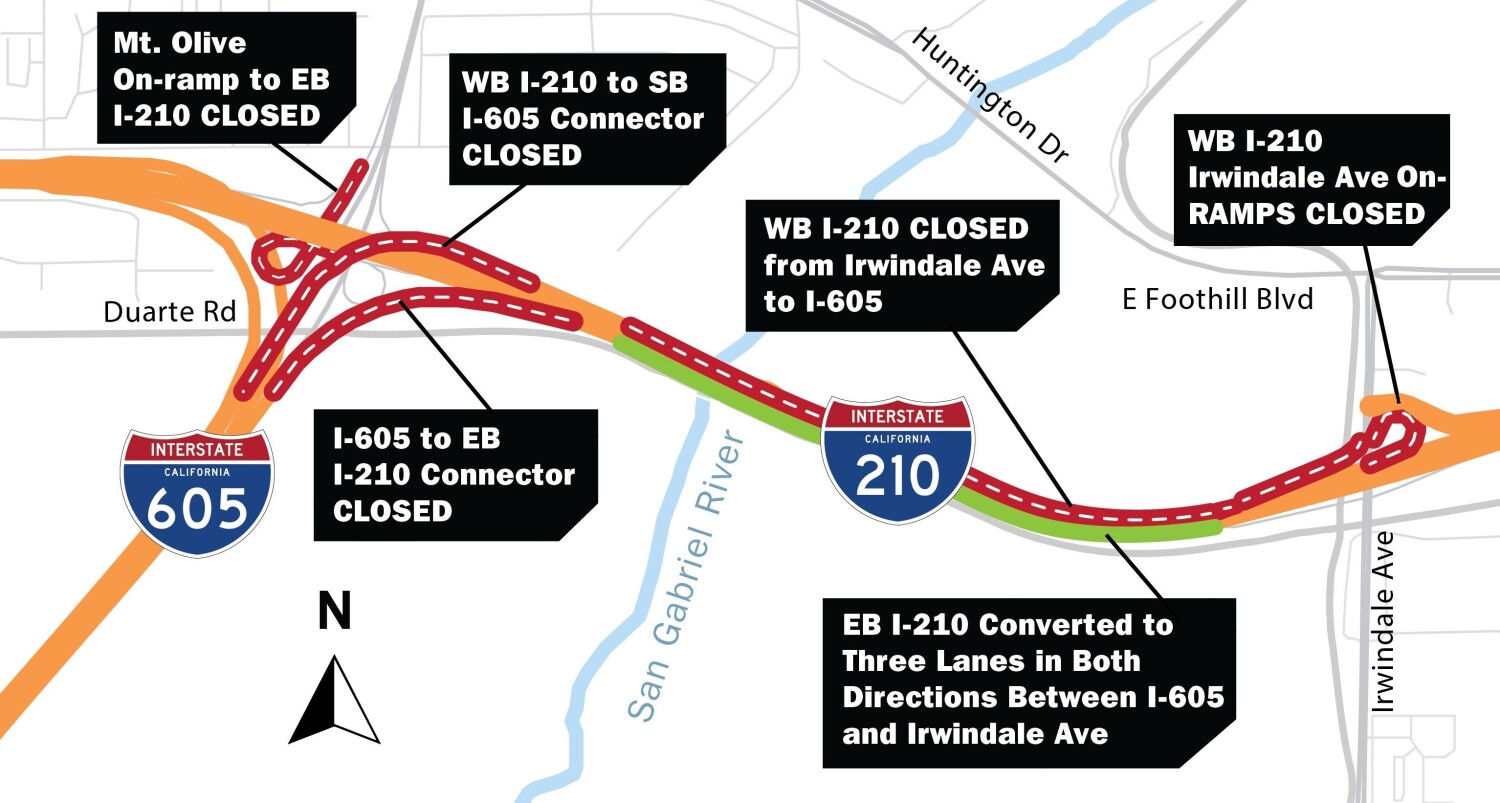 The 126-hour shutdown affects the 210 between 605 and Irwindale Avenues. The closures begin at 11 p.m. Wednesday and are expected to last through 5 a.m. July 26, Caltrans spokesman Eric Menjivar said.

During the shutdown, crews will divert traffic from the westbound 210 to the eastbound side, which will be temporarily divided into three lanes for each direction, Menjivar said.

Caltrans encourages motorists to take public transit via the Metro Gold Line or the Metrolink San Bernardino Line to avoid delays. Motorists can also use the 10 or 60 as alternative routes.

With major delays also expected on city streets, Caltrans is advising residents to avoid travel during the closure and work from home if possible.

“Caltrans strongly encourages residents to plan ahead before heading to their destination,” Menjivar said.

The shutdown is part of the San Gabriel River Bridge Hinge Replacement Project, which will replace hinges and older bridge railings to bring the freeway “in line with current standards.” The project will also replace the drainage and upgrade the concrete median.

Menjivar said crews would have to demolish two sections of the bridge for the work.

According to Caltrans, no bike lanes will be closed in the area. The agency said it has taken steps to ensure bike lanes on the east and west sides of the San Gabriel River remain open.

The trails will be open during their normal hours of operation – sunrise to sunset – using protective fencing and scaffolding. Caltrans will also provide a diversion for cyclists who prefer not to use the bike lanes under the scaffolding.

Work on the bridge overhang and railings will also be carried out overnight to ensure that daily use of the pathways under the bridge is not affected.

A second shutdown will occur Aug. 17-23 on east 210 between 605 and Irwindale Avenues as part of the bridge repair project, Menjivar said.

The closure schedule is subject to change depending on the weather, so residents are encouraged to monitor the Caltrans Quick Map for the most up-to-date traffic information.

Fauci to retire by end of Biden's term, CNN and Politico report