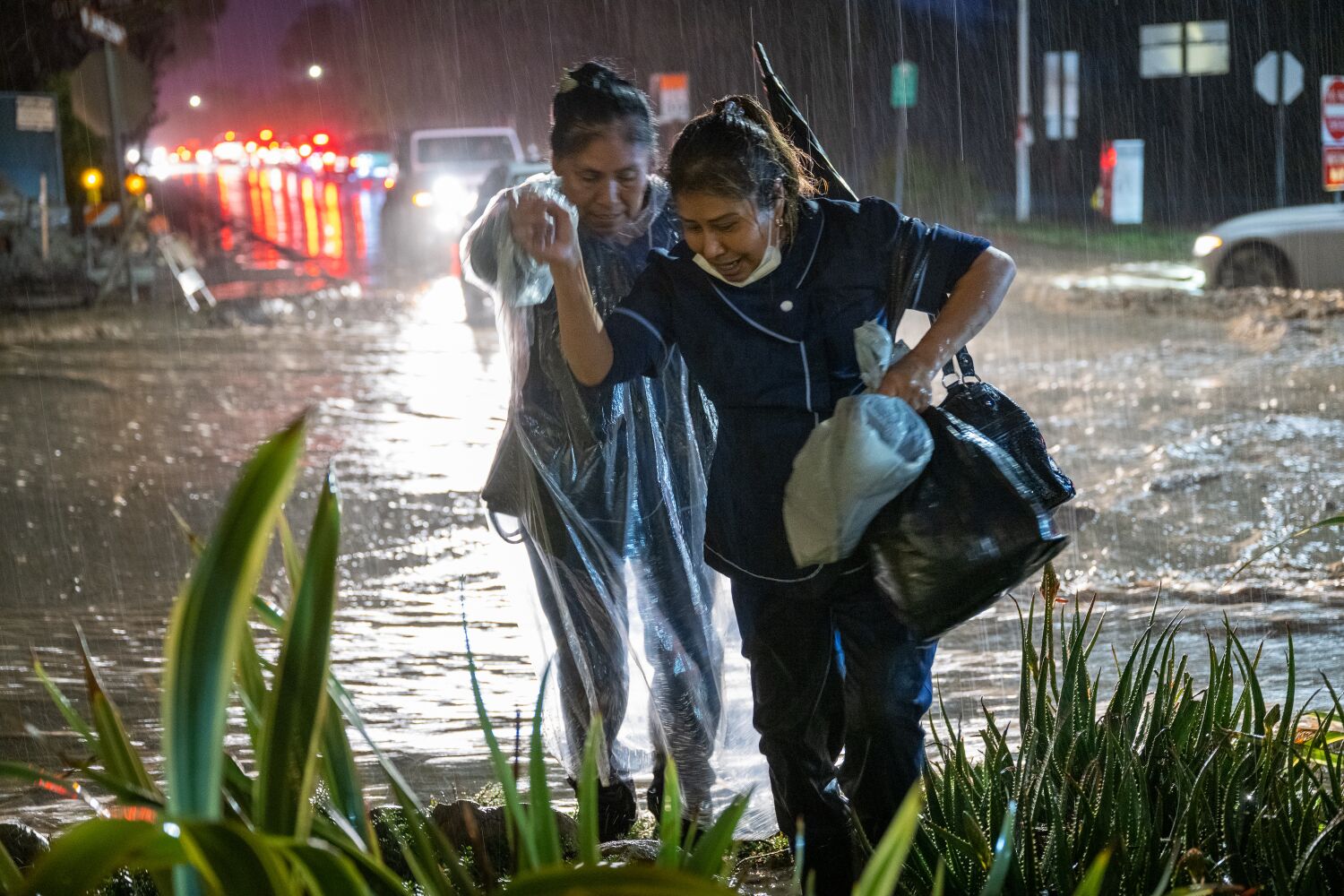 Greg Downs and his dog Snickers strolled along Montecito Creek on Tuesday morning as the sun struggled to break through the clouds.

The creek gurgled steadily, but the current wasn’t as fierce as Monday’s when water sloshed onto Olive Mill Road. Downs, who lives on a hill nearby, wanted to see how the stream held up at night.

There was no damage to his home, but Monday’s storm made him nervous.

“It’s pretty much a blessing to be able to handle that amount of water,” he said.

Through Tuesday afternoon, residents along the Central Coast — from Montecito and the rest of Santa Barbara County — are on Paso Robles – were told they could return to their homes after being told to flee on Monday. There have been few reports of widespread damage.

The announcement came after a storm dumped unprecedented amounts of rain, forcing a mass evacuation of Montecito and surrounding communities on Monday amid concerns of flooding and mudslides.

“The storm we just experienced was a significant and powerful weather event, one in a series of storms that have hit and will continue to hit Santa Barbara County,” said Sheriff Bill Brown.

Evacuation orders remained in place Tuesday night farther north, along a stretch of the Salinas River and Carmel Valley in Monterey County, officials said. Areas along the Big Sur River have been downgraded to an evacuation alert.

Officials said several people were rescued from vehicles submerged in flood waters Monday including in the Aliso area of ​​Santa Ynez and on Highway 135.

On Monday night, a stormwater tank in northern Santa Barbara County failed, sending mud and water into a residential neighborhood. Several homes were evacuated in the community of Orcutt due to damage to the catchment area and roadway.

“There is water and mud damage to the adjacent homes,” Scott Safechuck, public information officer for the Santa Barbara County Fire Department, said Tuesday. “I don’t have the exact number of homes affected but we do know there is more damage out there.”

The area has seen record-breaking rainfall, lifting Lake Cachuma 21 feet in one day. Video of a person kayaking down a flooded street in east Santa Barbara has gone viral, but emergency officials are advising against such activities.

Officials said they were still determining the amount of damage caused by the storm.

“It takes time to evaluate infrastructure and evaluate these roads,” Safechuck said.

About 100 people sought refuge Monday night at evacuation centers in Carpinteria and Santa Barbara, both run by the American Red Cross. Most of those stranded were drivers who stayed by looking for shelter when the 101 freeway was closed in both directions. At Carpinteria, about 25 people — and a dog named Chica — stayed at the Veteran’s Center blocks from the ocean.

“She’s good,” said Chastnie Cribbs, 47, of her Papillon mix, who slept tucked under her on an army-style bunk at the shelter.

Cribbs was returning to San Pedro from Washington with her fiancé Eddie Sanchez, 57, when the two were diverted from the 101. All the hotels were fully booked, so they decided to stay at the shelter.

“I was pleasantly surprised by the facility,” Cribbs said. “Nevertheless, it was an experience — an experience I want to leave behind.”

City manager Dave Durflinger told The Times that Carpinteria avoided the worst of the flooding by upgrading infrastructure after storm-related flooding and mudslides in 2018 and preparing the city construction crew ahead of that storm.

“They were out cleaning drains and staying out all night keeping an eye on rising streams,” Durflinger said.

Durflinger noted that it was fortunate that the storm’s peak did not coincide with a high tide, which could have made the flooding much worse.

Still, Carpinteria Creek “was about 99% busy yesterday,” he said.

Residents at a nearby senior living complex have been moved to the top floor to protect them from possible flooding.

On Tuesday afternoon, when the sun finally came out, Barbara Eliasen stood on the Montecito Creek Bridge and watched the water cascade down the hills.

Her home was not damaged during Monday’s storm, and she did not live in the area during the 2018 mudslides, which did little to deter her from buying property in a city that had experienced extreme storms and fires in recent years.

“They say that’s the price you pay to live in paradise,” Eliasen said, though she admitted she had made her bet by buying in a “safer area” of town.

Still, the allure of the place is obvious.

“It’s beautiful and I love being here,” she said.

CHAT REPLAY: What Is Your Heart Risk? Learn About Common Risk Factors From a Heart Specialist

2022 Midterm elections are coming. But what is a midterm?