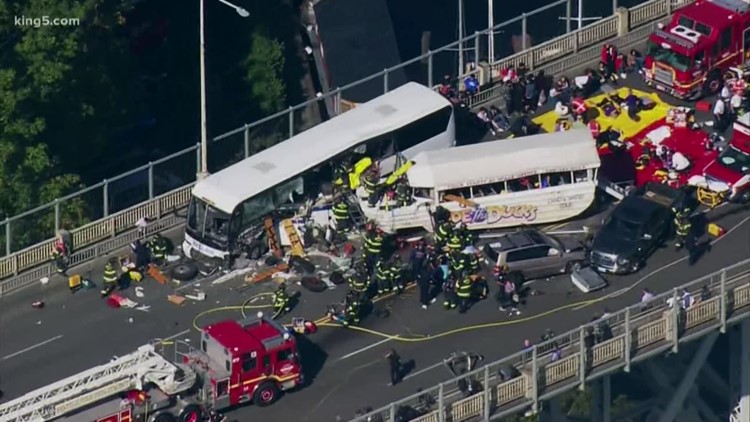 On September 24, 2015, Ride the Ducks of Seattle were operating a Stretch Duck that failed when the left front axle housing failed, causing a fatal accident.

Editor’s note: The videos above is from September 2019 when the driver spoke for the first time about the fatal crash.

SEATTLE — As of Saturday, it has been seven years since the fatal 2015 Aurora Bridge crash that killed five and injured several others.

On September 24, 2015, Ride the Ducks of Seattle operated a Stretch Duck that failed when the left front axle housing failed, causing an accident on the bridge.

The National Transportation Safety Board investigated the accident and found that the duck boat involved did not have the axle repair recommended in 2013.

RELATED: Sons give emotional testimony about Ride the Ducks crash that killed their mother

Ride the Ducks faced more than a dozen lawsuits after the crash. In June 2019, a Montana woman was awarded $4 million in damages in what was believed to be the latest lawsuit after years of litigation.

Ride the Ducks of Seattle sued its parent company in 2019, saying the parent company knew about a defect in the vehicles used for sightseeing tours but did not disclose the information.

The coronavirus pandemic accelerated the company’s decision to close.

Ride the Ducks of Seattle closed and filed for Chapter 7 bankruptcy in April 2020. According to a statement on the company’s website, the legal issues surrounding the fatal crash were “too much for the company to overcome.”

Chapter 7 bankruptcy does not include a repayment plan like Chapter 13 bankruptcy, but allows the trustee to collect and sell the debtor’s non-exempt assets and use the proceeds to pay creditors.