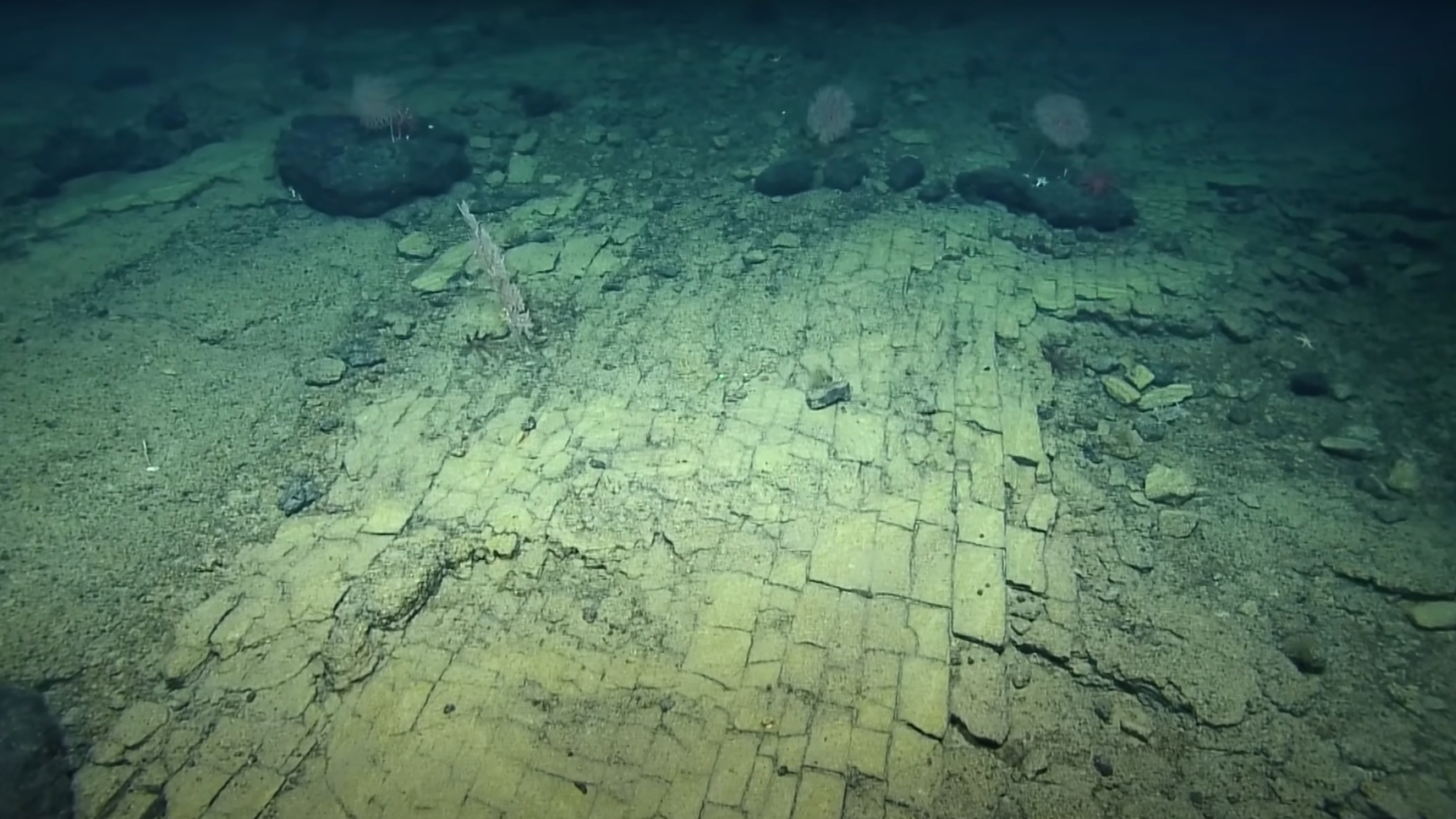 A team of marine biologists realize they’re definitely not in Kansas anymore after spotting what appears to be a yellow brick road atop an undersea mountain near Hawaii.

“Yellow brick road?” a scientist mused in a YouTube Videos of discovery.

Others commented that the rocks were reminiscent of a very different fictional world: “That’s the way to Atlantis“, said one researcher.

The yellow rocks, divided from each other at a 90-degree angle, form a narrow band and look like they were carved and arranged by human hands. However, the seemingly paved road is just a natural result of ancient volcanic activity thousands of feet below the water’s surface, the researchers said in the description below the video.

“At the Nootka Seamount, the team discovered a ‘dry lake bed’ formation, now identified as a faulted outflow of hyaloclastite (a volcanic rock that forms during high-energy eruptions, where many pieces of rock settle to the seafloor)”, the researchers wrote.

The brick-like division between the rocks could be a random result of heating and cooling stresses from multiple volcanic eruptions over millions of years, the team adds.

The researchers took a detour down this eerie undersea path while driving a remotely operated vehicle (ROV) around Papahānaumokuakea Marine National Monument, a protected conservation area that includes approximately 582,578 square miles (1,508,870 square kilometers) of the Pacific Ocean northwest of Hawaii. The expedition is part of the Ocean Exploration Trust’s Nautilus Exploration Program and aims to investigate ancient seams near Liliʻuokalani Ridge, on the western edge of the monument.

One of the team’s main goals is to collect geological samples from the area’s seams – underwater mountains formed by volcanic activity – to better understand their age and origin. Learning this could also yield new insights into the formation of the Hawaiian Islands, researchers wrote on the website Nautilus. The team will also collect microbial samples, to study what kinds of quirky creatures have managed to thrive near the deep underwater volcanoes of the Pacific Ocean.

The researchers added: “Our exploration of this previously uncharted area is giving researchers insight into life on and in the rocky slopes of ancient, deep seas. this”.

Previous expeditions aboard the research ship Nautilus produced a lot of strange things at sea. During a 2018 excursion to Papahānaumokuakea Marine National Monument, researchers were dumbfounded by a zigzag creature, googly eyes seems to change shape when in front of the camera. The researchers later identified the creature as an eel (Pelecanoides Eurypharynx), an extremely large mouth fish that can remove its massive jaws to swallow prey even larger than itself.

The researchers piloting the ROV on that expedition also responded to the strange sight before them with a cultural reference.