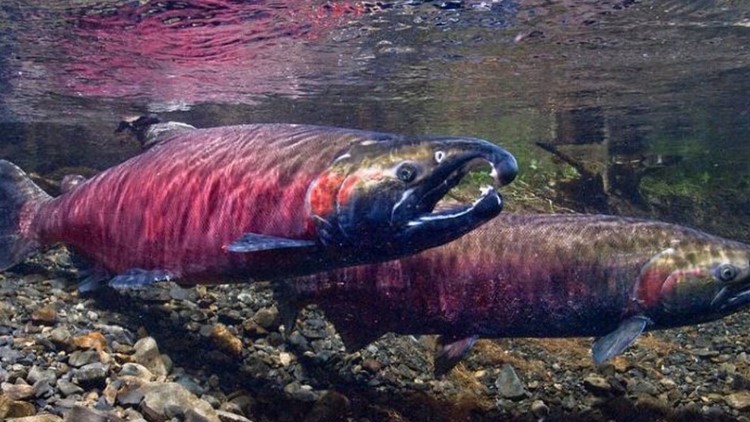 A toxin called 6PPD-quinone was found to be responsible for the death of local Coho salmon before they spawn, causing a ripple effect in the environment.

SEATTLE — Since the early 1990s, scientists along the West Coast have known about a mysterious killer lurking in the waters of urban creeks that are wiping out Coho salmon populations.

While it is natural to see dead Coho salmon in urban creeks, they are expected to die after spawning.

In fact, their deaths could have gone unnoticed without the help of rangers, organizations and citizen scientists who help monitor populations of Coho salmon.

It wasn’t until the fish was dissected that people realized these salmon were dying before they spawned, causing a ripple effect in our environment.

In a healthy ecosystem, salmon provide food for orcas and spawn in urban creeks. Their decaying carcasses also provide nutrients to the soil and forests.

It was this pivotal role that led scientists on a journey to find the mysterious killer and one that ended up in western Washington.

In 2014, the University of Washington’s Tacoma Urban Water Center invited researcher and professor Ed Kolodziej to help lead a team of scientists tasked with solving the mystery.

With the help of local communities, Kolodziej’s team was able to collect water samples from urban creeks with high rates of pre-reproductive mortality.

“We have seen a lot of tire chemicals in the country over the years, and by 2017 our investigations had indicated tyres,” said Kolodziej.

With more than 2,000 chemicals found in tire soaking water, it took the team three years to narrow down those thousands of chemicals into one category.

A few months after the initial discovery, the team brought a sample of the chemical to Jen McIntyre at Washington State University in Puyallup for testing.

What they discovered was a poison called 6PPD-quinone is created when the common tire preservative 6PPD is mixed with oxygen. As tires age, the rubber begins to flake off leaving debris in their path.

When it rains, anything that doesn’t soak into the soil becomes rainwater pollution, eventually ending up in local waterways, where each fall the Coho salmon return to spawn.

Kolodziej calls the discovery a career-defining moment that brings “relief and excitement”.

But the excitement has faded with so much uncertainty surrounding possible solutions.

“The data on pollution and its sources are controversial and appreciated because the financial benefits to that are huge,” says Kolodziej.

That’s where local supporters come in.

“They are literally absorbing chemicals that interfere with brain activity and they will die before they can reach the next part of the creek to lay their eggs,” said Sean Dixon, CEO of the Puget Soundkeeper Alliance. . .

Puget Soundkeeper has been a nonprofit focused on clean water in Puget Sound for nearly 40 years.

Dixon says we have to chew gum while walking because 6PPD is in virtually every tire in the US.

The American Tire Manufacturers Association mentions 6PPD in several ways on its website, saying in part the chemical enhances driver safety and that more research is being invested in the chemical. this substance as well as its effect on Coho.

But even if the use of 6PPD is stopped, Dixon said it could take decades before it is completely phased out.

Data from WSU shows that when stormwater pollution passes through green infrastructure, such as rain gardens, it filters out 6PPD-quinone.

“Licenses today under today’s law say if you have a problem, start figuring out how to solve it,” says Dixon.

Puget Soundkeeper has already sent notices of intent to sue five cities including Seattle, Burien, Mukilteo, SeaTac and Normandy Park for non-compliance with permits, but Dixon said the goal is to work with the cities because he acknowledges the violations. Very expensive solution.

“I certainly don’t envy the quest against these towns but what we can’t do is bury our heads in the sand,” Dixon said.

WHERE DO WE GO FROM HERE?

Supporters now hope for a stronger response from Washington state.

“This is being actively discussed between lawmakers and the Governor’s office and the Washington State Department of Ecology, but we are concerned that another year of dialogue will pass,” Dixon said.

A petition has been sent to the Washington State Department of Ecology demanding more action in the new Longfellow Creek in West Seattle, which has a pre-spawning mortality rate of nearly 90%.

A response from the state that was filed says in part:

“Science is clearly demonstrating that 6PPD-quinone kills or harms aquatic species, and municipal stormwater management is an important part of addressing this harm to aquatic life. At this time, we do not believe that a site-specific adaptive management effort is the most appropriate or necessary response.”

Jeff Killelea of ​​the Department of Ecology says it has permit requirements to take corrective actions for site-specific hotspots, but he also said the problem (6PPD-quinone) is spreading widespread and widespread throughout the Pacific Northwest.

Killelea said the Department of Ecology is looking to make the best use of the money received from the legislature to address multiple sites and is working on ways to ensure the solutions put in place now work in the long run. .

Killelea said: “We definitely agree that action should be taken to address it and take action when necessary. We just disagreed on the timing and mechanism for that remedy.”

But Dixon says this is the time of greatest risk.

Chargers have playoff hopes and more healthy bodies vs. Chiefs

Driver is released after arrest in L.A. deputy recruit crash

China’s Economy Won’t Be Number One