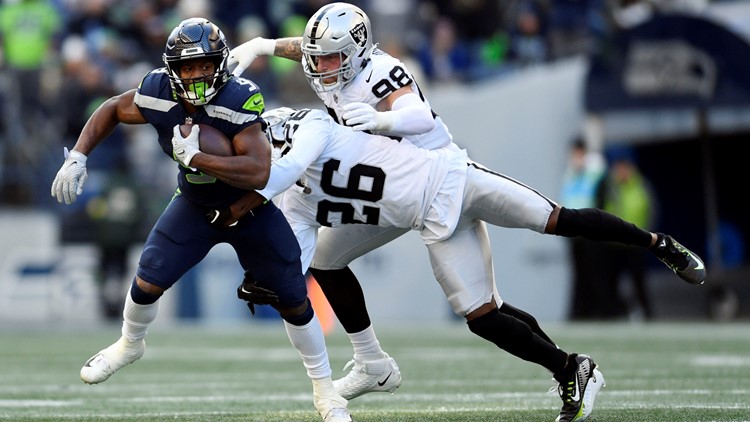 Pete Carroll gave an honest assessment of where the Seattle Seahawks’ running back room is.

RENTON, Wash. (AP) – Pete Carroll immediately gave an honest assessment of where the running back room for the Seattle Seahawks stands.

And the rest of Seattle’s running backs? Well, that remains a big unknown ahead of Sunday’s game against Carolina.

Carroll had only vague updates on the status of starter Kenneth Walker III and backups Deejay Dallas and Travis Homer after injuries thinned Seattle’s backfield in the second half of the win over the Los Angeles Rams.

Walker pinched his ankle late in the first half against the Rams. Carroll said Monday it wasn’t a traditional ankle sprain but that there was inflamed tissue in the area. Whether he can return to the field this week remains unknown.

“He’s doing everything he can. He rehabs all day, every day, doing whatever he can to get right,” Carroll said.

Dallas suffered a more traditional ankle sprain and played through the injury in the second half while Homer wasn’t even active as he dealt with a knee problem.

Carroll said Homer practiced Wednesday while Dallas didn’t do any work in the early walkthrough.

“[Dallas]kind of bounced around today. He didn’t take any snaps in the walkthrough, but his shot is exactly what you want. He is determined to come back. So we’ll see what happens,” Carroll said.

Last week’s injury situation saw Jones suddenly get his first ball-carrying action with the Seahawks since being released from waivers in October. His numbers were on the meager side, rushing with seven carries for 14 yards, but the need was significant after Walker was unavailable and Dallas was used sparingly.

“Those kinds of situations, those kinds of things just show if you were really prepared for the week,” Jones said. “I think I did pretty well. I mean, I think I could do better than what I’ve done. But I just have to build on that this week.”

Seattle added veteran Wayne Gallman to the practice squad to add a little depth, but the entire position is filled with uncertainty ahead of the Panthers’ visit. Adding to the situation for Seattle is the quick turnaround into next week when the Seahawks host the 49ers in a Thursday night game with major impact on the NFC West.

Walker would clearly be the preferred choice but the rookie has struggled in recent weeks. He averaged 12 yards per carry on his three rushes before injuring himself against the Rams, though 30 of those yards were on one run.

Walker was held for 17 yards in Seattle’s loss to Tampa Bay and had just 26 yards on 14 carries in his loss to Las Vegas two weeks ago.