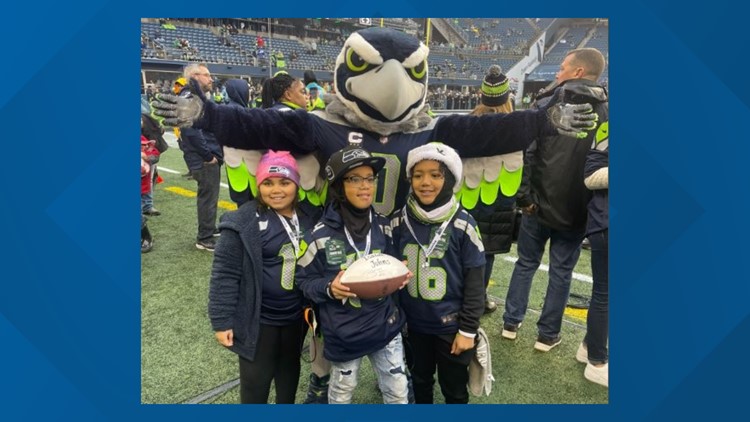 Isaiah Johns, 9, has a dream of one day playing in the NFL, and he had a special moment Sunday with the help of his local team.

SEATTLE, Wash. — Before the start of Sunday’s home game at the Seahawks, 9-year-old Isaiah Johns stood on the sidelines patiently waiting for a glimpse of his favorite player, DK Metcalf.

Johns was wearing a Metcalf jersey and was watching the game with his family and best friend. The adventure to Sunday’s game was different for Isaiah, as he had no idea how many surprises the Seahawks had planned for him.

Johns was recently injured in a street shooting in Renton. He was shot multiple times in the chest and face by someone in a stolen vehicle.

Last month, Johns’ family and friends welcomed him home from the hospital, and nearly a month after the shooting, he was cheering on his favorite team, the Seahawks.

Shakira De La Cruz, Johns’ mother, said: “He is doing very well in this situation. He seems normal, like a normal child again. Now he has been in school for half a day.” .

Before the game, the Seahawks’ Blitz mascot surprised Johns with an autographed ball, and the NFL referee went to Johns for help to review a play.

“It means a lot because they work for me and they give me a license,” says Johns.

“It’s been amazing. I’m grateful for what they’ve done and seeing him so happy here is all we could ask for,” De La Cruz said. “He’ll talk about this forever.”

Johns is a soccer star himself and he hopes to one day play in the NFL and for the Seattle Seahawks.

I Plan for Everything. But I Didn’t See Inflation Coming.

2 killed, 1 injured after car crashes into light pole in Tacoma