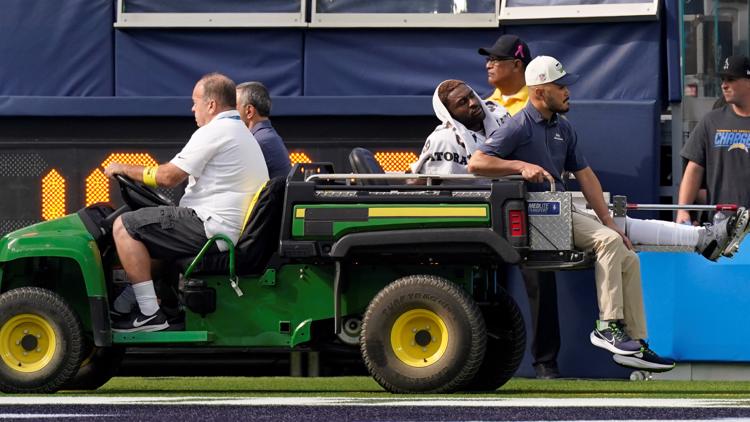 Coach Pete Carroll said Monday that wide receiver DK Metcalf will not need surgery because of an injury to his patellar tendon.

RENTON, Wash. — Seattle Seahawks wide receiver DK Metcalf suffered an injury to his patellar tendon but does not currently need surgery, according to coach Pete Carroll.

On his weekly radio show on KIRO-AM Monday morning, Carroll said the team got a “great report” on Metcalf after he walked out of Sunday’s first-half win over the Los Angeles Chargers.

Metcalf appeared injured late in the first quarter when he jumped in the end zone from a catch and was promptly ruled out by the team.

X-rays in Los Angeles on Sunday were negative, and Metcalf underwent additional scans in Seattle Monday morning. Carroll said there was no timeline for Metcalf’s potential return.

Metcalf had a 12-yard catch against the Chargers before injuring himself. For the season, Metcalf has 31 receptions for 418 yards and two touchdowns in seven games.

Safety Ryan Neal said Metcalf was in good spirits when he saw him in the dressing room at half-time and said he was “fine”.

Metcalf signed a three-year, $72 million contract extension in the preseason.

The Seahawks defeated the Los Angeles Chargers 37-23 after Metcalf left the game and now lead the division after seven weeks.

According to Pete Carroll, DK Metcalf does not need surgery for his patellar tendon problem. pic.twitter.com/sIjoTzHiSW

Are you a mosquito magnet? It could be your smell, new study finds

Pimblett among six (possible) stars in the making at UFC 282

What to watch for in first College Football Playoff rankings