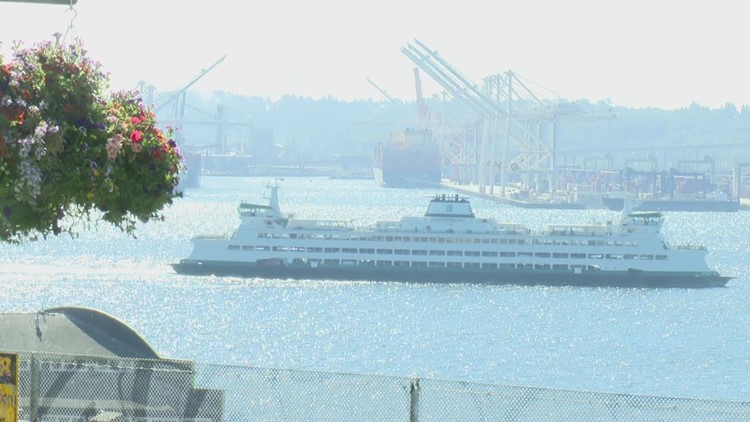 Air quality in the Seattle area was rated as “good” to “moderate” early Tuesday afternoon, according to the Puget Sound Clean Air Agency.

SEATTLE — Summer is drawing to a close and it appears we may end the season with some smoky air in King County thanks to our state’s wildfires.

“Thick, fuzzy, you could almost feel it when you breathe in, and it even has a little burn,” said Nyx Smith, who works at Pike Place Bar & Grill.

That’s how some people described Tuesday’s smoke and haze that was being felt throughout the Seattle area due to wildfires in western Washington.

“It’s definitely that burning wood smell,” Smith said. “As if it’s a campfire in front of you, you might not hate it, but as it comes in and takes over, it’s just overwhelming.”

Though some felt the effects of the smoke, others welcomed this new tune on the air.

“I was out like two and a half hours today just busking,” said Vince Bigos, who played guitar near Pike Place Market.

According to the Puget Sound Clean Air Agency, air quality in the Seattle area was rated as “good” to “moderate” early Tuesday afternoon, meaning it’s safe for everyone, including those in the “sensitive group,” to go out.

Isha Khanna of the Puget Sound Clean Air Agency said although there was smoke in the air it was “not really worrying”. She said Tuesday’s air quality was not ideal, but not as bad as at the beginning of the month.

“This event is not as severe as the wildfire smoke two weeks ago, but you can still see moderate air quality that is ultimately unhealthy or sometimes worse for vulnerable groups. It’s pretty sporadic at this point,” Khanna said.

She hopes this is the last significant smoke western Washington will receive this year, which is music to people’s ears.

“It’s great. It’s going to get us into a bright, sunny weekend and give us a good feeling of coming back to Seattle,” Smith said.

Experts said air quality could worsen later Tuesday night but expect air quality to improve by Wednesday afternoon and should be clear by Thursday.

Spotify dives into audiobooks with a library of over 300,000 titles

Are Rachel, Tino Still Together? ‘The Bachelorette’ 2022 Finale Spoilers

Latest California storm brings new threats: ‘Not out of the woods yet’

‘The Bold and the Beautiful’ Spoilers: Will Carter Walton (Lawrence Saint-Victor) Try To Get Paris Buckingham (Diamond White) Back?