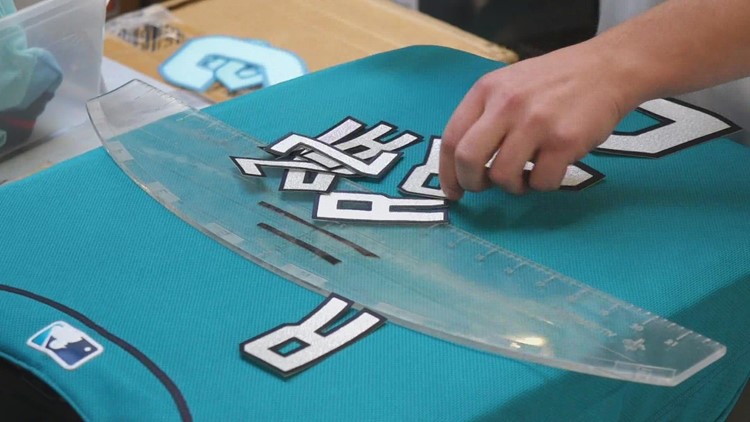 SEATTLE — The Mariners make the playoffs for the first time in 21 years, which warrants some new merchandise.

Nobody knows the demand for jerseys better than Jerry Thornton. The former grocery store clerk said it was in the late 1980s when he followed his instincts and started making athletic jerseys for amateur, collegiate and professional sports teams.

In 1992 he partnered with the Mariners and saw an immediate demand for the likes of Ken Griffey Jr. and Alex Rodriguez.

“When Ichiro showed up, they were both blown away,” Thornton said.

STT Sports Lettering Co is based in a humble SODO workroom and is packed with boxes that come and go.

“A lot of people don’t know that we make the jerseys for the players and for retailers,” Thornton said.

The current demand for Mariners jerseys has gone through the roof, but Thornton’s traditional approach to making the authentic jerseys takes time and doesn’t come from a machine.

“We have certainly come a long way. For example, we now use a laser printer to cut out the letters so we can press them, but hand-stitching isn’t going away,” Thornton said.

They hand sew each jersey individually, and it takes about 30 minutes per jersey.

Thornton said supply chain issues and labor shortages have made the last few years quite challenging for the handcrafted industry, but his decades-long relationships with many big-name teams have ensured their survival.

Some of his other clients are the Seahawks, Sounders, Storm, Thunderbirds, Silvertips, Kraken, UW and many more. Anyone who wears a stitched jersey to a game is likely wearing STT Sports Lettering.

Thornton said the Mariners’ success this season has created a massive thirst for jerseys, while at the same time many other teams are just starting their seasons, spurring demand.

Fortunately, he has some trusted partners to lean on.

“My son and daughter both work here now and hopefully they can take over if I can put retirement on the back of my shirt,” Thornton said.

Dodgers vs. Colorado Rockies: How to watch, start times, schedule