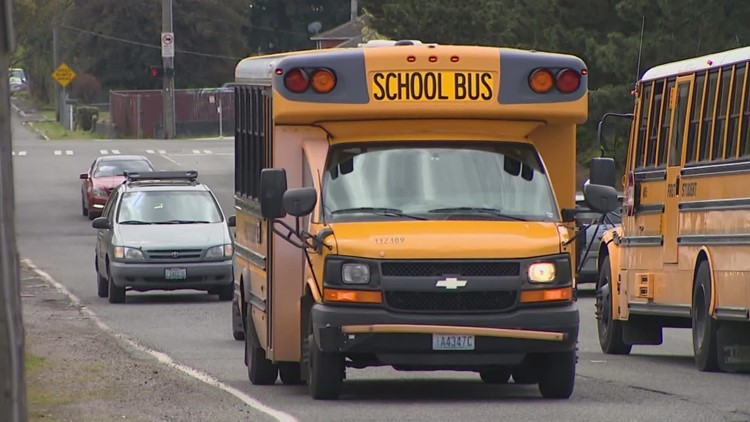 For Highline Public Schools, staff shortages meant that some students on a bus line were late for the first day of school.

BURIEN, Wash. – School districts are struggling with bus driver shortages. The nationwide troubles are being felt in western Washington.

For Highline Public Schools, this meant that some students were late for the first day of school. The delay affected only one bus route. Though it was a minor disruption, the district says it’s highlighting why it wants to hire five to 10 more drivers, but right now it’s a challenge.

Earlier this morning some families received a text message advising them that line 113 is expected to be 30 to 40 minutes late due to staff shortages.

“It was just the one route that we knew would be significantly delayed,” said Catherine Carbone Rogers, Highline Public Schools’ chief communications officer.

Rogers says it was only a stretch because the district learned last night it would be missing a driver.

“We have enough to cover all our routes, but if someone drops out we don’t have enough backups. So we’d really like to hire more bus drivers,” Rogers said.

Highline Public Schools is not alone. The National Association for Pupil Transportation says the industry is grappling with a significant shortage of school bus drivers. Hop Skip Drive, a transportation company, says they surveyed a variety of school transportation directors and 88 percent said they were limited by the driver shortage.

“This is also a problem for us in certain markets. We were very fortunate in Seattle that our recruiting team did an excellent job,” said Scott Gulbransen, senior director of communications at First Student.

First Student is one of two companies that will provide transportation to public schools in Seattle this school year. In the past 30 years, First Student was responsible for all bus lines, now there is a second provider, Zum.

“They split it right down the middle between the two of us. There were 184 routes each,” said Gulbransen.

Zum must ramp up and hire drivers before he can tackle all 184 tracks.

“So, speaking to them, we were asked to take on 78 of those routes,” said Gulbransen.

The temporary arrangement is expected to last until December. A Zum spokesman said in a statement:

Zum stands ready to take the students to school as scheduled. Our contract was awarded in August with the expectation of ramping up to 50% SPS transport by January 2023 and we are executing on that very plan. Zum brings a brand new fleet of buses, hires and trains drivers, and introduces technology that makes driving safer for students and families in Seattle.

In the race for new staff, Zum offers incentives, and the Highline Public Schools in Burien do the same.

“We pay for their education and everything they need to get commercial certification,” Rogers said.

Highline Public Schools is accepting applications for drivers. The county’s website states that new hires can earn about $30 an hour.