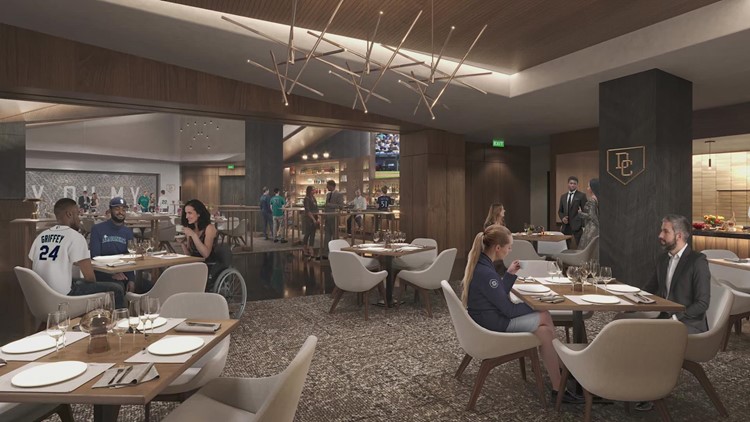 The team said this is the largest expansion and the first major interior refresh since the ballpark opened in 1999.

SEATTLE — The Seattle Mariners are giving fans a preview of their new premium amenities coming to T-Mobile Park next season.

The club is on track to complete its new Press Club and Diamond Club expansion in time for the 2023 season and MLB All-Star Game. The team said this is the largest expansion and the first major interior refresh since the ballpark opened in 1999.

RELATED: Sailors need to make $55 million renovations to T-Mobile Park in time for the 2023 All-Star Game

“This is all about the fans,” said Catie Griggs, Seattle Mariners’ president of business operations. “We are now focused on overdue improvements to the premium guest experience. By updating and expanding the Diamond Club and creating the new Press Club, we are responding to the desires of our fans and fulfilling our leasing commitment to ensure our premium offerings keep up with what’s happening in the Seattle market and in pro sports available is General.”

The budget for these projects is approximately $55 million. The Mariners pay for the upgrades and do not receive any King County Lodging Tax revenue.

The Diamond Club, which has been a magnet for corporate and business customers since the ballpark’s inception in 1999, is being renovated and expanded to total 13,000 square feet under the stadium’s lower bowl.

The press box will be gutted and upgraded to a premium area, with the media workspace moving further down to the third baseline. There will be seating for 200 guests with a full view just behind home plate.

The press box will remain on the Terrace Club level but will be reduced to 104 seats. It is scheduled to open in the middle of the 2022 season.