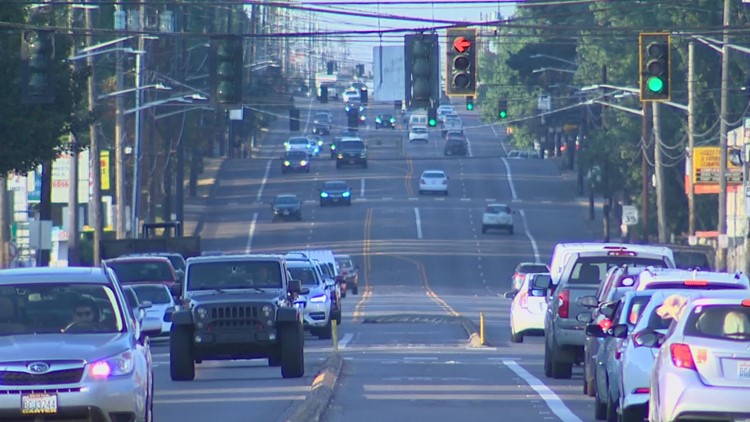 Harrell’s proposed budget includes $8 million for Vision Zero, the city’s effort to end traffic fatalities on some of its busiest streets.

SEATTLE — This week the mayor of Seattle announced how he plans to allocate the city’s proposed $7.4 billion budget. Millions could walk toward the city’s goal of ending traffic fatalities on some of its busiest streets.

Aurora Reimagine Coalition members said every stretch of Aurora Avenue from the bridge to the border is unsafe.

“You could sit here for five minutes and inevitably you see something crazy, whether it’s a person or another car, someone’s going to make a dangerous move,” said Tom Lang of the Aurora Reimagine Coalition.

“We are investing millions in necessary safety investments along corridors with many accidents in the city,” Mayor Harrell said earlier this week, announcing plans for the proposed budget.

Mayor Harrell wants to set aside $8 million for Vision Zero, and some of that money would go toward improving Aurora Avenue. According to a recent study, the lane was considered the deadliest street in the city.

“I think Vision Zero could use a lot more than $8 million. I think it’s a good place to start,” said Aurora Reimagined Coalition’s Robin Randels.

Improvement efforts along Aurora date back almost 20 years. According to SDOT, the last comprehensive route development plan for Aurora Avenue was released in 2003. SDOT said while recommendations for short-term improvements were included, few had been made.

SDOT is currently conducting a US$2 million long-term design project. It is also asking for community input in a security improvement survey by October 7th.

“We need to make sure that people trying to cross the freeway or any other street in the city can do so safely and at the speed they choose,” Lang said.

While slower speed is a key concern for Vision Zero, those on Aurora said the road needs redesigning and expect the mayor to spur on that effort.

“Think of this urban freeway, Aurora, as more than just the freeway, but as the heart of a community,” Lang said.

The City Council will review the mayor’s proposed budget over the next two months. Public hearings are scheduled for October 11, November 8 and November 15.