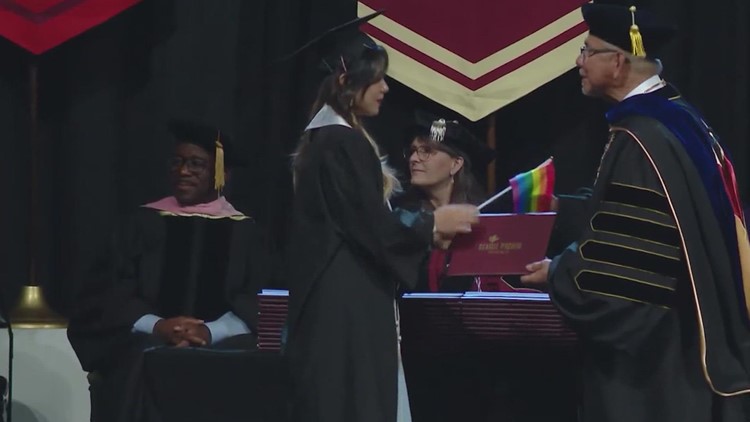 The demonstration was in response to a policy preventing the SPU from hiring LGBTQ+ teachers.

SEATTLE — Some graduates from Seattle Pacific University’s (SPU) inauguration ceremony on Sunday chose to present pride flags to the school’s president rather than shake his hand.

The demonstration was in response to a policy that the SPU board of trustees recently voted to uphold, preventing the school from hiring LGBTQ+ staff. The school’s behavioral expectations of staff require that they refrain from same-sex sexual activity, sex outside of marriage, and cohabitation before marriage.

SPU students have been protesting the board’s decision for weeks, including a sit-in outside the university president’s office that has been going on since May 24. Some graduates decided they wanted to make a final statement about the policy as they walked the stage.

“A lot of us have expressed that we don’t really want to shake hands with the President,” said SPU student Chloe Guillot. “So one of the ideas that came up was, ‘What if we just gave him pride flags instead of holding out our hand, and then we did our degrees?'”

About 50 graduates proudly received flags to walk across the stage, and about 45 of them presented the flag to the President instead of shaking his hand. Guillot said the demonstration showed the graduating class’ commitment to bringing about lasting change at the university.

“We just wanted to close with a very graphic representation of how our community is still fighting this policy at the SPU,” said Guillot. “Just because we graduate doesn’t mean we forget or stop fighting.”

The students plan to continue the sit-in outside the President’s office until at least July 1, which is also the deadline the organizers have given the board to reevaluate their decision. After that, Guillot said the students will take legal action.

“[SPU] taught us students to stand up for what we believe in, so I think a demonstration at the graduation ceremony is a great summary of what we’ve been taught here and we’re putting it into practice,” said Guillot.

In a statement, SPU interim President Pete Menjares said: “It was a wonderful day to celebrate with our graduates.

Welcome to the world Jack Nicholas!

Elderly Covid Patient Was Out in a Body Bag, Loaded for Cremation. She Was Alive.