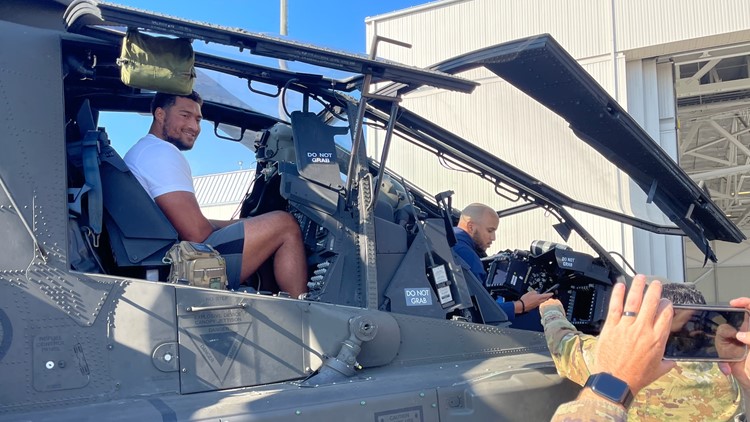 Players stood alongside recruits at a enlistment ceremony, met with current soldiers, and then had fun with firepower.

JOINT BASE LEWIS-MCCHORD, Wash. – Ahead of Sunday’s matchup between the Seattle Seahawks and the Atlanta Falcons, several players from both teams visited Joint Base Lewis-McChord for a military engagement event.

“We’re here to show love and support for the men and women of our country,” said Nino Gray Jr., community engagement manager for the Seahawks.

Gray Jr. is also a Purple Heart recipient. He is a retired US Army Staff Sergeant. While in Afghanistan, his platoon was hit by a 400-pound IED. Gray was badly injured.

“It’s pretty surreal if I’m honest, the last time I was here I was in a recovery unit and for two years I was in a wheelchair and being back here and bringing players and Legends and Seahawks dancers and stuff like that full circle. It’s great to be a part of,” Gray Jr. said.

The visit began in the Air Force hangar, where players boarded a C-17 to attend an induction ceremony for recruits joining the Air Force and Army.

The players then held a meet and great with current service members and military personnel.

After signing autographs and taking photos, the players boarded Stryker vehicles for a training experience.

“It’s a blessing. you look up to me I look up to them. You protect our country. It’s cool,” Stone told Forsythe. “It was cool to get out here and hang out with these guys. For them it is work, but for us it is fun.”

Is it OK to mix Moderna, Pfizer in updated COVID booster shots?

Mookie Betts injury exposes a serious problem for the Dodgers