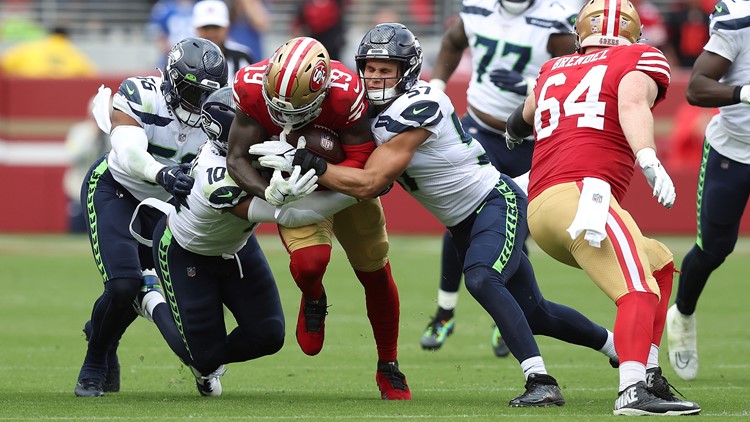 The Seahawks have lost their last three of four games while the 49ers are on an NFL-best six-game winning streak.

SEATTLE — With four games remaining in the regular season, the Seattle Seahawks still have a shot at winning the division.

Of course, it won’t be possible unless they can beat the division-leading San Francisco 49ers at home on Thursday night. The 9-4 49ers would win the NFC West with a road win, leaving the Seahawks a wildcard berth as their only path to the playoffs.

This will be the team’s second meeting of the year after the 49ers outclassed the Seahawks 27-7 in the second week.

Meanwhile, the 49ers will be without their top quarterbacks (Jimmy Garropolo and Trey Lance). However, star running back Christian McCaffrey is with the 49ers and will present matchup problems for the Seahawks defense across the field in this matchup.

If the Seahawks vs. 49ers story was any indication, expect a game to come to an end.

And it must be reiterated: This is easily the biggest game of the Seahawks season (until next week).

Those three losses in four games came at absolutely the wrong time for the Seahawks. (Is there really ever a “good” time to lose three games out of four?)

It’s even worse when you analyze the losses. Seattle lost three home games to the Buccaneers, Raiders and Panthers. Neither of these teams is a legitimate contender.

This uninspiring stretch of football leaves the Seahawks questing for the playoffs while their Thursday night opponent hasn’t lost a game since Oct. 23.

No Jimmy, no problem?

The 49ers are currently riding an NFL-best six-game winning streak in this divisional matchup. They’ve won five games by double digits at this stretch, with an average margin of 14.7 points.

Two weeks ago, San Francisco lost its starting quarterback to a foot injury for at least three months. That should have been the death knell for the 49ers, but the 49ers aren’t most teams.

The 49ers’ top-flight defense suffocates opponents (at just 286.8 yards per game) and masks injuries at the league’s most important position.

Brock Purdy, a rookie drafted in the seventh round, is the 49ers’ third starting quarterback this season, and here’s the thing: He was really good.

It was only two starts, but the rookie was the NFL’s eighth-best quarterback per game. Purdy has thrown for 461 yards, had four touchdowns, and completed almost 70% of his passes.

San Francisco will be very, very, very difficult to beat if Purdy continues to play so well.

He needs to get down to earth a bit. Right?

I am 2% confident in this prediction.

Boosie Badazz Shocked To Find Out That Drake Is Jewish

How the Federal Reserve Fed the FTX Meltdown

Breeders’ Cup: Will Flightline go down as an all-time great?

How a $2 billion futuristic sports palace will aid the Clippers in the battle for L.A. hoops