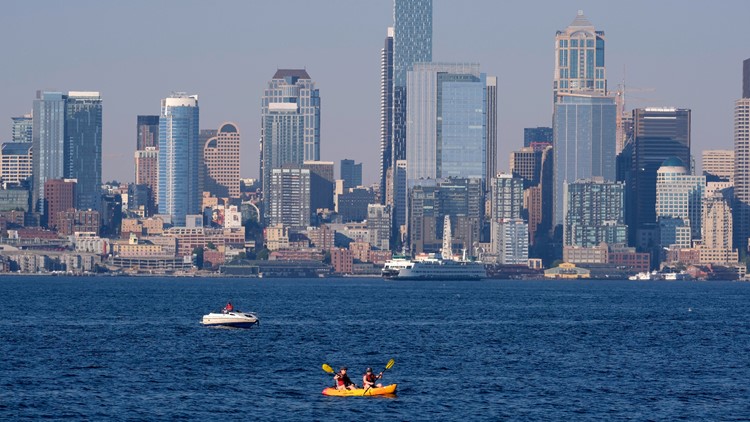 The heat wave we are in is breaking all records for parts of western Washington.

SEATTLE — The ongoing heatwave gives one last breath on Sunday before easing as we head into the workweek. Temperatures on Sunday afternoon will top the 90s one last time in Seattle before dropping on Monday.

TIED TOGETHER: Forecast for western Washington

The forecast high of low 90s Sunday in Seattle will be six straight days of high temperatures reaching 90 degrees or warmer at Sea-Tac. That stretch of six consecutive days over 90 would set an all-time record at Sea-Tac for the past 77 years. On Saturday, we tied 2015 and 1981 for the longest stretch of 90-degree days by five, and Sunday’s prediction calls for day six of the 90’s.

With one final hot day, heat warnings continue for most of western Washington. The National Weather Service (NWS) issued the advisories warning residents that the prolonged heat could pose a moderate to significant risk of heat-related illnesses, “particularly for those who are sensitive to heat and those without effective cooling or adequate hydration.” “.

The excessive heat warning is in effect for several areas of the Puget Sound region until 9 p.m. Sunday due to “dangerously hot, high temperature conditions,” the NWS said. The alert includes areas of Snohomish County north of Everett, King County and the eastern Puget Sound lowlands, Pierce County south of Tacoma, and areas near Bremerton and Silverdale.

A heat advisory is in effect for much of western Washington not included in the excessive heat warning until 9 p.m. Sunday. The survey covers the Lower Chehalis Valley area, western Whatcom County, the Hood Canal area, southwest interior and western Skagit counties.

In response to the heat, several cooling centers have been set up in the Puget Sound area for the homeless or those without air conditioning or refrigeration.

Many cooling centers are located at community centers and libraries, but officials also suggested residents go to places like malls to try to beat the heat.

BMW recalls 83 iX and i4 EVs over battery fire concerns