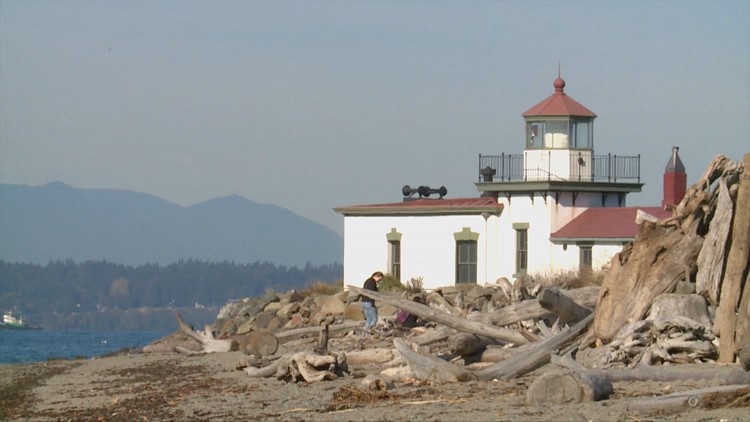 The lighthouse, beaches and nearby beach car park are closed due to construction at the West Point Wastewater Treatment Plant.

SEATTLE — Portions of Discovery Park in Seattle are closed Wednesday and Thursday for construction at the West Point Wastewater Treatment Plant.

The lighthouse, beaches and nearby beach car park will be closed.

This work is part of a pipe replacement project in King County at the sewage treatment plant. The crews replace a pipe that carries biogas that generates electricity. Replacing the pipe requires a planned release of biogas, which emits a sulfur or rotten egg odor that is noticeable to people in the vicinity of the plant.

Biogas is a gas mixture that mainly consists of methane, carbon dioxide and hydrogen sulfide. According to the US Energy Information Administration, it is made from feedstocks such as agricultural waste, manure, municipal solid waste, plant matter, sewage, green waste, and food waste.

To limit the impact on park users and neighbors, the pipe replacement is expected to begin at 3am on Wednesday, September 7th and continue until the new pipe is installed and operational. King County said work will be complete Thursday, September 8, and closed areas of Discovery Park will reopen when it’s safe.

King County is working with Seattle Parks and Recreation and the local police and fire department to enforce the closures. There will be no-go signs on beaches, pathways leading to beaches, North, South and East car parks and other high traffic areas.

Here is a map of the affected areas in Discovery Park.

King County will monitor air quality throughout the process.

In 2011, King County installed West Point’s cogeneration system, which converts gas from the wastewater treatment process into a heat and power source for the facility. In addition to providing heat for the West Point processing plant, some of the gas will be converted to electricity and sold to Seattle City Light.

Russia's invasion of Ukraine is jolting Germany into rebuilding its military