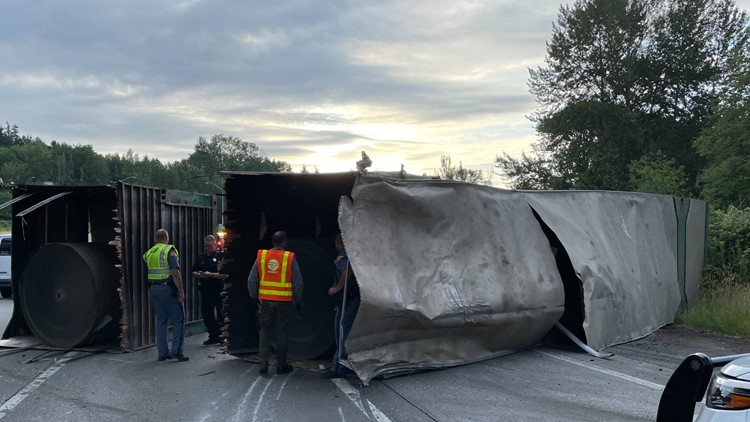 Around 9:55 a.m., the said WSDOT Vehicles on southbound I-5 and eastbound SR 518 to northbound I-405 were moving “somewhat more efficiently, albeit slowly.” However, the department continued to advise travelers to use alternative routes or expect delays.

Only one lane was open on eastbound SR 518 as of 6:50 a.m., the Tukwila Fire Department tweeted.

The Washington State Patrol (WSP) said the tractor-trailer driver was fine. Around 7:30 a.m., WSP Trooper Rick Johnson tweeted that there would be an extended closure because the trailer would fall apart in the crash.

A tow truck arrived at the scene around 7 a.m

Tukwila Fire Brigade said there were no casualties and a fuel leak was stopped after a container broke in half. Tukwila Fire said drivers on eastbound SR 518 “should expect long delays.”

THIRD UPDATE: Both southbound I-5 and eastbound SR 518 merge with northbound I-405 #southcenter move a little more efficiently, albeit slowly. It is still recommended to seek alternative routes or expect delays. We appreciate your patience! pic.twitter.com/uB2l1eQmMP

Ann Shulgin, pioneer of using ecstasy and other psychedelic drugs in therapy, dies

Hundreds of car burglaries reported in Clarksville in 2022