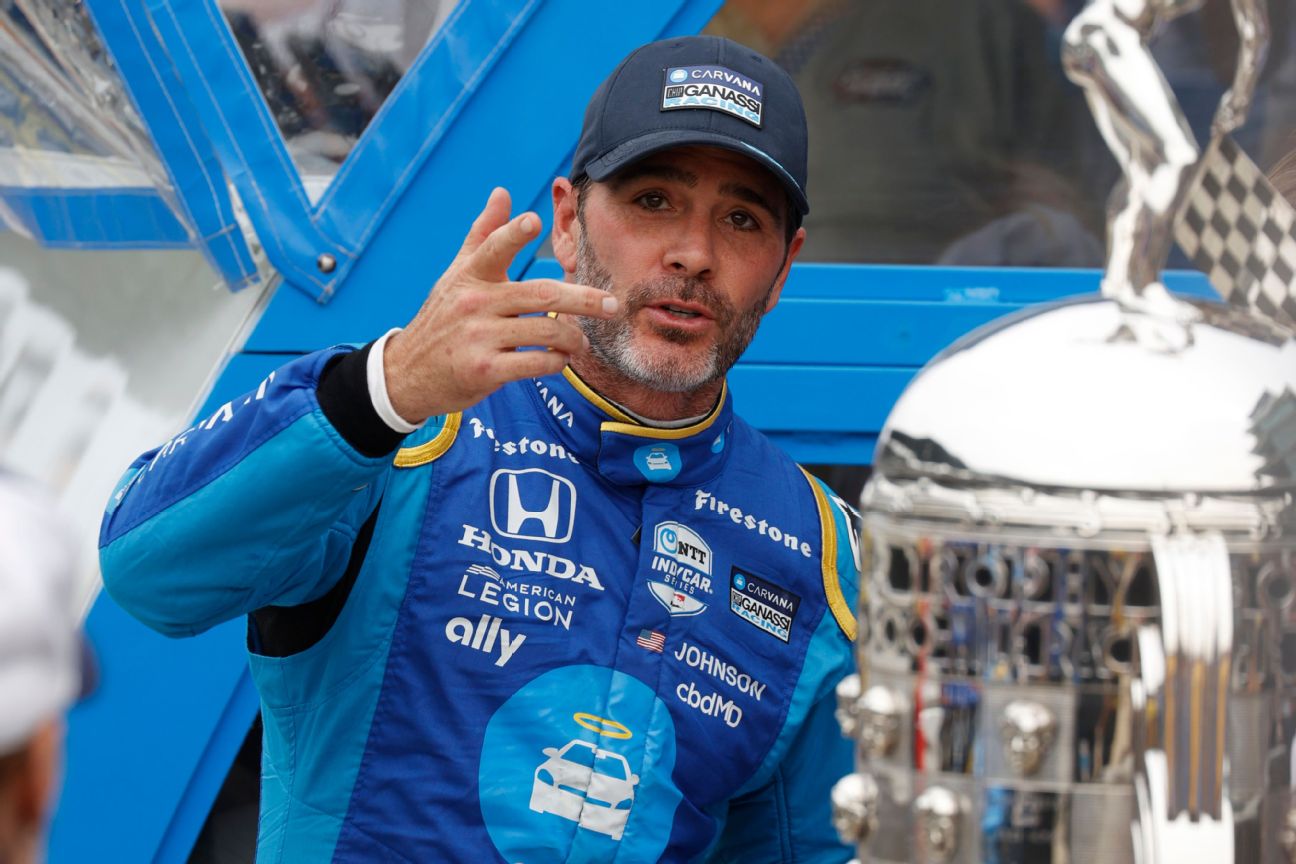 CHARLOTTE, NC — Seven-time NASCAR champion Jimmie Johnson is retiring from full-time racing and will focus on spending time with family.

He reckons his future schedule will not feature more than 10 bucket list events, but the 47-year-old had no idea what that schedule would be like on Monday.

Johnson told The Associated Press he’s pleased to announce, “I have a clean sheet of paper and we can now see what the possibilities are and start making a calendar.” Sponsor Carvana has previously shared with Johnson, that he will support whatever races he follows.

It took Johnson two weeks after the IndyCar finals – with a weekend in England with Ganassi teammates Scott Dixon and Dario Franchitti at the Goodwood Festival of Speed ​​- before finally making his decision to cut back. He told the AP he doesn’t really need the time to think about his future.

“It was an interesting process to feel so fulfilled with the experience and then try to make a decision as well,” Johnson said. “By and large, there is so much life planning with the kids. We always had the idea of ​​living abroad for a year or two. We love Colorado and want to spend more time there, and there’s just so much going on professionally and personally that I just wanted to take some time and not base the decision on positive or negative experiences at the track.”

What does Johnson, who retired from NASCAR in 2020, think?

The 24 Hours of Le Mans would be part of NASCAR and Hendrick Motorsports’ “Garage 56” special. Johnson has said from the outset that he would like to be part of the three-driver Le Mans line-up, although it is a next-generation exhibition and the car will be alone in its class.

He had been waiting for the 2023 IndyCar schedule to see if it would even be available, but will make sure his schedule is clear should NASCAR want its future Hall of Famer to be part of the project.

Johnson certainly won’t be returning for a second full IndyCar season with Chip Ganassi Racing. He only raced street and road courses in 2021, added the ovals to race the entire 2022 season, and now isn’t even sure if he’ll even race IndyCar at all.

“We fully support Jimmie. He was a valued member of our team and if we can find a way to continue working together, we’d love to do that,” said team owner Ganassi.

Johnson struggled on the road and street courses for over two seasons, with his best performances on ovals – the discipline he dominated in NASCAR for nearly two decades. He finished IndyCar-best fifth in Iowa, and though he ultimately fell on his Indianapolis 500 debut, Johnson spun laps in excess of 240 mph in a stunning qualifying performance.

“I have a desire to go back, it’s at this point right now, I know what it takes to fulfill a busy schedule and I don’t have that in me,” Johnson told AP. “I don’t have that passion that I need for myself to commit to a full season.”

Johnson has said since retiring from NASCAR in 2020 that he would return to racing given the right opportunity, and is now mulling the idea of ​​driving “the double” — the Indianapolis 500 and the Coca-Cola 600 on the same day.

Kurt Busch was the last driver to attempt the 1,100-mile odyssey across two states in 2014. Busch fell short of completing 200 miles when his engine died in the NASCAR hand-to-hand. Tony Stewart, who has competed twice in both races, is the only rider to have completed all 1,100 miles. John Andretti and Robby Gordon both tried ahead of Busch.

Johnson wants to try: He has won the Coca-Cola 600 at Charlotte Motor Speedway four times, including three straight wins from 2003 to 2005.

“You know me and endurance sports, and the double sounds great,” Johnson told AP. “I always had this respect for the guys who did the double. I’d say it’s more of a matter of respect than an item on the bucket list and I’d like to put some energy into that idea and see if I can pull it off.”

The other NASCAR event that caught his eye? Next year’s inaugural race through the streets of downtown Chicago and the All-Star race at North Wilkesboro. Johnson noted that as a previous winner, he received a dispensation for both the All-Star race and the show season-opening Clash at the Los Angeles Memorial Coliseum.

The future of sportscar racing is unknown for Johnson after Petit Le Mans, which concludes the IMSA season this weekend. He’s spent the last two seasons running the endurance races in a joint entry with Hendrick and Action Express, but doesn’t expect to have enough inventory next year when IMSA accepts new cars for Johnson’s project to continue.

He told AP he would consider racing in a lower IMSA category like LMP2 and is even curious about the six-race World Endurance Championship. But the WEC series fascinates him because of its exotic locations – Monza, Italy, Fuji Speedway in Japan, Bahrain – and the love of international travel he shares with his wife and two young daughters.

He and his wife Chani Johnson have tried sending their girls to school in England or France for a year to get the experience, and as a hands-on father, Johnson takes an active role in getting his daughters to and from their busy schedules of sports and activities. Chani Johnson is also a successful art gallery owner and is looking to expand her business.

“Chani has always supported me to the nth degree while having her goals, desires and following her path and career. I think she’s optimistically cautious that I go through with this plan,” Johnson told AP. “But those decisions are based on the needs and requirements of the family and I think it will be difficult and a little more complicated in my schedule when we have some traction traveling and living abroad.

“But these are decisions that will be made over the next few months. And so I go into it, I would say, with no regrets. I look back and I’ve definitely learned lessons from what happened, good and bad. But I have no pit in my stomach from anything left unfinished or regrets I might have.

Review: Scott Turow has a new millennial heroine in 'Suspect'