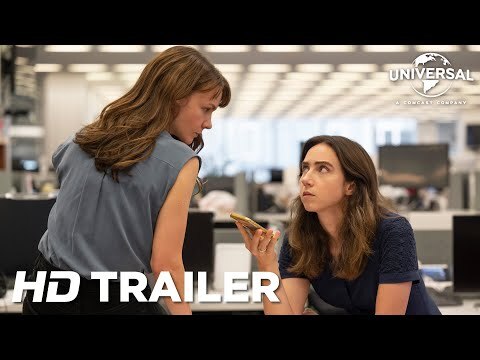 The preview introduces Carey Mulligan and Zoe Kazan as Megan Twohey and Jodi Kantor, respectively, the journalists who tracked down several Weinstein accusers for a bombastic New York Times investigation that helped start the #MeToo movement (founded by the activist Tarana Burke) in 2017.

“In your previous stories, how did you convince women to tell you what happened to them?” Kazan’s Cantor asks Mulligan’s Twohey in the trailer.

“My argument was, ‘I can’t change what happened to you in the past, but together maybe we can help protect other people,'” Mulligan replies. “Basically the truth.”

Based on Twohey and Kantor’s non-fiction book about their experiences in the Weinstein investigation, “She Said” follows the tenacious protagonists of Mulligan and Kazan on a mission to convince anxious women to tell their stories while being enthralled by the movie mogul and his being monitored and threatened by henchmen.

“The only way these women get on the record,” says Twohey of Mulligan.

“If they all jump together,” says Kantor from Kazan.

Approximately three years after Twohey and Kantor’s article appeared, Weinstein was convicted of committing a criminal sex act and third-degree rape and sentenced to 23 years in New York State Penitentiary.

Since the New York Times exposé was published, more than 80 women have accused Weinstein of sexual misconduct. And hundreds more have risen up against men in positions of power — like former US gymnastics team doctor Larry Nassar, chef Mario Batali and former CBS executive Les Moonves.

Directed by Maria Schrader, co-produced by Brad Pitt and written for the screen by Rebecca Lenkiewicz, “She Said” hits theaters November 18.

Column: Silence was what made the queen’s funeral special