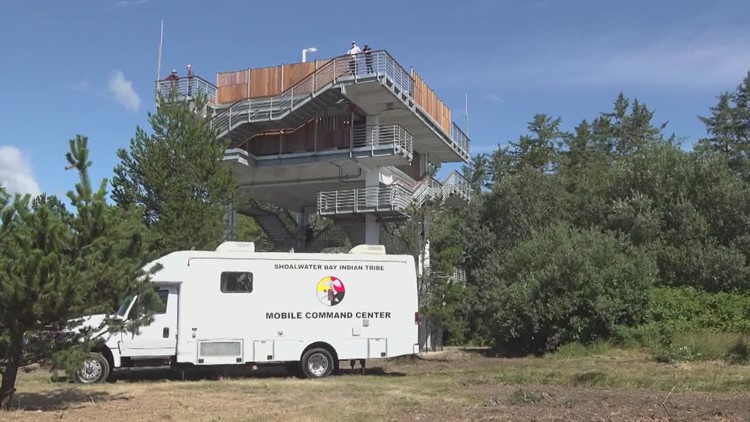 On Friday, the Shoalwater Bay Indian Tribe and its partners unveiled a vertical evacuation tower designed to save hundreds in the event of a tsunami.

TOKELAND, Wash. – A new, one-of-a-kind, free-standing vertical evacuation tower in Tokeland is designed to save hundreds of lives in the event of a tsunami.

The Shoalwater Bay Indian Tribe unveiled the tower Friday along with partners from the Washington State Emergency Management Hazard Mitigation Team, advisers from the University of Washington, FEMA and other agencies.

Decades ago, the tribe’s concerns about the threat of a tsunami prompted them to identify nearby high ground — but they wanted to do more. By 2017, the tribe decided they wanted a tower similar to that used in Japan.

For years, tribal leaders worked with the University of Washington and local, state, and federal agencies to model a tower, receive funding, and begin work on the project.

“We helped transform the atmosphere of helpless victims into one where we know that if we all work together, we can and will survive,” said Lee Shipman, chief of emergency management and elder of the Shoalwater Bay Indian tribe.

Members of the tribal council honored Shipman Friday, noting that they would name the evacuation tower “Auntie Lee” in homage to their years of work and collaboration in completing the project.

The tribe said studies showed a wave up to 10 feet traveling at high speed could make landfall within 10 to 22 minutes of a magnitude 8 to 9 earthquake in the Shoalwater Bay/Tokeland region. KING 5 was there as crews broke ground for the project, which was being built about 1.4 miles from tribal center in an area accessible to both tribal and non-tribal residents.

Washington is also home to the country’s first tsunami-resistant building; the elementary school of the Ocosta School District in Westport. The building has four stairways that reach the roof. The building is built strong enough to withstand crashing waves.

CLOCK: Tsunami waves would reach Seattle within minutes of the earthquake

Economist: Alex Jones, his company worth up to $270 million