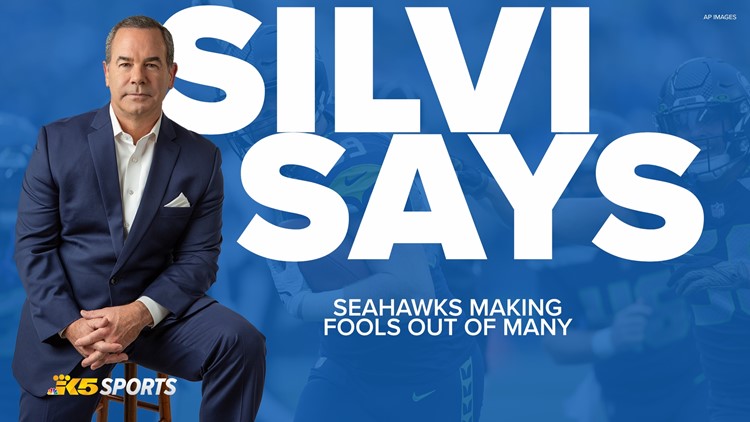 Almost every NFL pundit predicted a dismal Seattle season, but Pete Carroll and Geno Smith have the Seahawks firmly in the playoff talk instead.

SEATTLE – The last few days in the sports world have been full of mistakes. We saw our share in Seattle.

Some strange things happened at Lumen Field Sunday during the Seahawks’ win over the New York Giants.

Let me start off by saying that we all make mistakes, especially in the live TV business where you can’t go back and fix them.

Former NFL quarterback Mark Sanchez was the booth analyst for the Seahawks-Giants game. Seahawks kicker Jason Myers kicked a ball that took a deflection before it went over the bar for a field goal.

Sanchez said, “The thing looked like a Chuck Garlic knuckleball.”

Later on the show, Sanchez called himself an idiot when he realized that Knoblauch played second base during his MLB career and wasn’t a pitcher.

This is the same guy who infamously made a football after bumping into a teammate’s butt, so viewers may have simply chalked it up as “Sanchez,” much like how The Simpsons fans learned to describe such mistakes as “Homers.” .

Later that same game, Seahawks head coach Pete Carroll was penalized for a touchline offense. The referee drew his own homer as he announced to the crowd and television audience a penalty imposed on “the Seattle Mariners head coach.”

No one was more relieved to hear such a verbal misstep than Sanchez, as that line replaced his stupid garlic comment.

Again, a reminder that while live television can be fun and exciting, it can also be humbling when you’re in a hurry.

Which brings me back to my original point – bugs come in all sizes.

For those in our business who have publicly ripped the Seahawks apart for their perceived offseason blunders — those same pundits are looking pretty dumb right now.

I’m speaking of those in the national media who read an article here or listen to a 15 second soundbit and think that’s enough to form an informed opinion about a team they only know about on the internet to report.

Well, there’s one thing about the internet. It’s like Father Time – it’s undefeated.

someone recently created a montage of all the analysts who have absolutely blasted Pete Carroll, John Schneider and the entire Seahawks organization for their moves and lack of moves leading into this season.

This verbal montage was full of words like pathetic, absolutely awful, no hope. The same pundits said the Seahawks’ record would stand at 2-7 by early November and the team would finish the season with four or five wins at most.

This is not an indictment of all these people and their opinions. This is how they earn their living.

But man, at least let the team or players you’re railing against actually step onto the field and have a chance to prove themselves.

It’s just a good way to approach life. How many times have you looked at a situation or a person and said, “This is never going to work.”

Then someone catches your ear and says, “How would you know if you don’t at least give it a chance?”

Pete Carroll gave his players a chance to prove themselves, although he admitted this week he was surprised at how long it took his defense to figure things out.

Meanwhile, at the start of the season, Pete took all the daggers from the media and stood his ground.

Just like the organization did during the offseason, amid massive criticism for trading Russell Wilson and failing to sign a notable quarterback, it opted instead to pit career backups Geno Smith and Drew Lock against each other.

The team knew something you can’t get from an internet story or a random soundbite.

That’s why Pete Carroll ranks 18th on the all-time list of NFL wins.

And that’s why even on a Sunday afternoon, when an NFL umpire tells the world he’s going to penalize the Seattle Mariners coach for a side offense, it’s just words to Pete.

Just like the words he’s heard about his team all season, they mean nothing.

WNBA to use charter flights for all Finals games, increase postseason bonus pool

Joel Embiid, the Philadelphia 76ers and the arduous task of building around a superstar