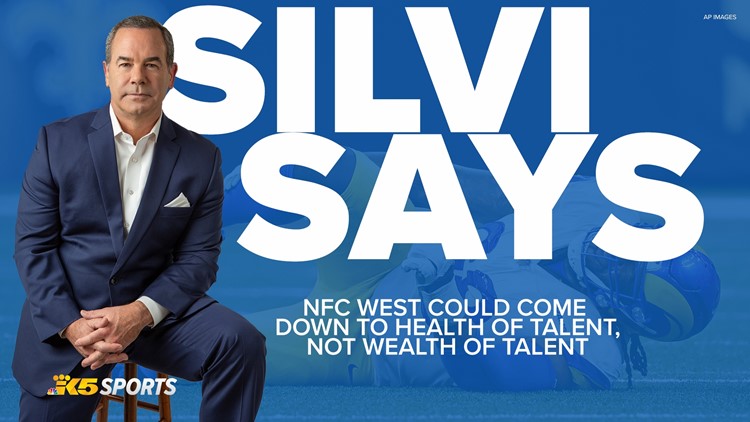 Since injuries eliminate starting players, the healthiest team may win it all.

SEATTLE — Mike Holmgren first brought this to my attention years ago when he was leading the Seahawks to their first Super Bowl. We chatted casually about the talent on his 2005 NFC championship team. He knew other teams in the conference had started the season with similar talent, but said, “Sometimes it’s the healthiest team that wins everything.”

The Seahawks included Tony Jones Jr., who was undrafted from Notre Dame in 2020. For that moment, he was the only healthy running back they had left.

And in a line straight out of nearby Hollywood and the Christmas classic Die Hard (arguably, yes), the Rams could be heard saying, “Welcome to the party buddy.”

No team has been hit harder by injuries this season than the Rams, and if the Seahawks got a taste of LA’s injury nightmare on Sunday, the 49ers got the main dish when starting quarterback Jimmy Garoppolo suffered a season-ending foot injury.

The NFC West leaders have now lost their two starting quarterbacks this season and remain with Brock Purdy. The 49ers made him the final pick of this year’s NFL draft, which automatically earned him the title “Mr. Irrelevant, which is awarded annually to the last player selected in the draft.

The Seahawks, on the other hand, have never drafted a Mr. Irrelevant.

Since its inaugural season in 1976, only five NFL players have been drafted to play at least 50 games. Considering the draft was 12 rounds through 1993, these players were among the longest of the long shots.

Kicker Ryan Succop is widely regarded as the most successful Mr. Irrelevant in history. The Chiefs drafted him in 2009 and 14 seasons later he’s still going strong. He currently ranks fourth in field goals scored this season.

As a side note, Succop went to high school in Hickory, North Carolina — the same town where I got my first job out of college. I thought I’d throw in an irrelevant fact, you know, to keep the topic going.

One last stat about Succop — he’s the only Mr. Irrelevant to win a Super Bowl thanks to Tom Brady and the Bucs.

The 49ers can only hope Purdy becomes the second Irrelevant to win it all.

But for now, their unhappiness might make things a little more interesting at the NFC West.

They are already without their top running back, Elijah Mitchell.

The Seahawks are in the same boat.

Both teams rely on the next-man-up mentality that every team relies on when it comes to injuries.

But sometimes it’s not about the next man. It’s about the last man who could determine how the West was won.

https://www.king5.com/article/sports/nfl/seahawks/injuries-major-factor-team-leading-nfc-west-seahawks-49ers-rams/281-da83d937-08bf-49b1-b1b6-f939446adf58 Silvi Says: The healthiest team may win it all in the NFC West

Palestinian cause takes center stage at the World Cup