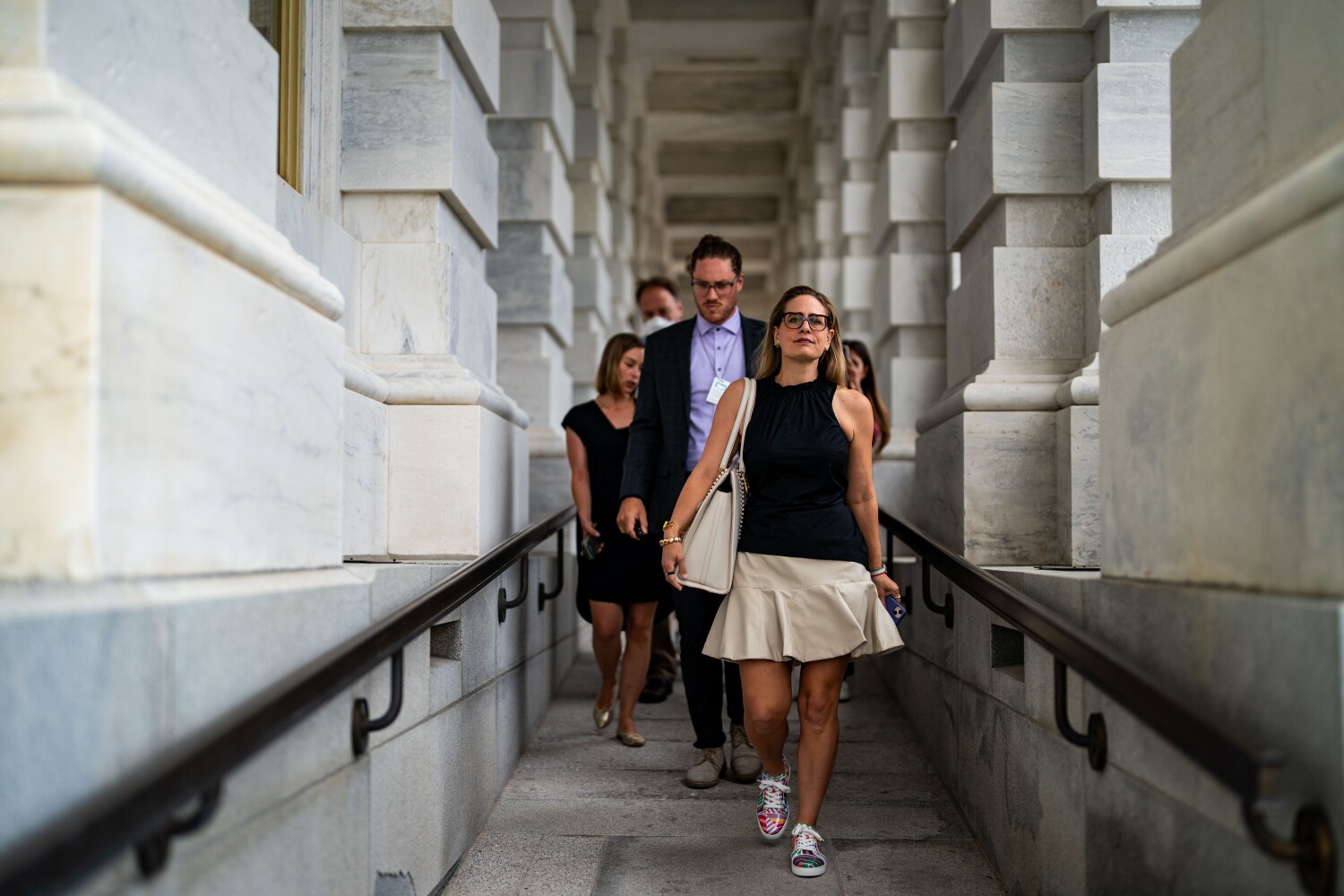 When Senator Joe Manchin III and Senate Majority Leader Charles E. Schumer reached a surprise deal last month on a health, climate and tax bill, all but one Senate Democrat accepted the deal rather than allow further negotiations to collapse take risk.

Sen. Kyrsten Sinema, the inscrutable Arizona Democrat who has at times voted against her party’s demands, cast her vote for two amendments. Most attention has focused on her push to scrap a proposed tax on wealthy investors.

But Sinema’s last-minute efforts also added $4 billion to address the water crisis along the Colorado River as the region suffers its most intense drought in centuries, a 23-year streak of extreme drought caused by the effects of the climate change is amplified.

Senators from other western states had been pushing for drought relief for months, hoping to get it included in a big bill.

But Sinema’s leverage was critical because she was the only one willing to jeopardize her “yes” to the long-delayed Democrat bill. Their only concession was to reduce their original claim to $5 billion.

Democrats say she helped her cause by demanding something that benefited many states — not just her own — and included many politically vulnerable colleagues.

The drought rule was officially announced by three Western Democrats who are up for re-election this fall: Sens. Mark Kelly of Arizona, Catherine Cortez Masto of Nevada and Michael Bennet of Colorado.

But when asked where the credit lies, Padilla Sinema said, “primarily”.

The House of Representatives is expected to pass the measure on Friday and send it to Biden for signature.

Much of the $4 billion will be used to address the Colorado River’s historic deficit, including paying farmers and others to voluntarily use less water. It will also fund conservation efforts and environmental restoration projects such as: B. Controlling dust and restoring aquatic habitats around the shrinking Salton Sea, fed by the waters of the Colorado River.

“That’s a very big deal, I think, especially when you consider that $4 billion was basically pinned in the 11th hour,” said Alex Funk, director of water resources at the Theodore Roosevelt Conservation Partnership. “It’s very specifically tailored to prioritize the Colorado River Basin.”

How the $4 billion is divided and spent depends on the Bureau of Reclamation, as well as states, tribes, and public agencies.

“The first provision is compensation for voluntary reduction and diversion of water. It has to be done,” Cortez Masto said.

The Colorado River, which feeds seven western states and northern Mexico, is chronically overstressed and has been plagued by a “mega drought” since 2000, which research says is being greatly aggravated by global warming.

Its largest reservoirs, Lake Mead and Lake Powell, have dropped to record lows and are now nearly three-quarters empty.

The federal government took the unprecedented step in June of demanding emergency water use cuts to keep reservoirs from sinking to critically low levels. Reclamation Commissioner Camille Calimlim Touton said in a congressional hearing that water use should be reduced by 2 million to 4 million acre-feet next year, about 15% to 30% of the total annual diversions in the US and Mexico .

This call for urgent action, along with warnings from federal officials that they could unilaterally impose cuts if necessary, has prompted a series of behind-closed-door negotiations between officials from water districts that serve towns and farms throughout the Southwest.

But until a few days ago, the question of where enough money for the water-saving measures would come from remained unresolved.

Funk said the funding was intended to help address some of the immediate challenges along the river, including longstanding concerns in California’s Imperial Valley over lung-damaging dust blowing from the receding shores of the Salton Sea.

Leaders at the Imperial Irrigation District, which controls most of the Colorado River, said protecting the Salton Sea salt lake was a “necessary requirement” to address the river’s problems.

Funk said the incorporation of funds for the Salton Sea — described in the legislation as “inland waters” — is a “linchpin to bringing Southern California interests on board.”

Growers in Imperial Valley and neighboring Yuma, Arizona have debated suggestions for lower water intake. Under a proposal released by Arizona farmers, participating growers would forego one acre-foot of water for every acre of farmland, yielding approximately 925,000 acre-feet of water savings.

Producers would not leave the land lying fallow, but “decide what and how much to plant,” according to the proposal, allowing them to make crop decisions based on how much they need to cut back on irrigation.

“We’re optimistic,” said Chris Udall, executive director of the Agribusiness and Water Council of Arizona, adding that Arizona irrigation district chiefs have agreed that the proposal’s goals are achievable.

“Anything less than that would probably be a disaster for many farmers. From the looks of it, the US and Canada will likely see fewer products on store shelves,” Udall said.

Farmers in the Imperial Valley and Yuma produce much of the country’s winter vegetables, as well as hay for cattle and other crops.

In the three states of the river’s lower basin—California, Arizona, and Nevada—about 75% of the water is used for agriculture.

“It’s extremely helpful that there is a large funding source that could be used to compensate these water users,” said Sarah Porter, director of Arizona State University’s Kyl Center for Water Policy.

Farmers in Yuma have proposed paying $1,500 per acre-foot of water they temporarily forgo each year, Porter said, while some growers in Imperial Valley have proposed a higher amount. However, at these prices, $4 billion over the next four years would be nowhere near enough to meet the federal government’s reduction target.

“There’s still more negotiation to be had on the price,” Porter said. “And the final price probably won’t be as high as $1,500 per acre foot.”

Porter accompanied Sinema and water officials as they toured the Hoover Dam on Monday. She said long-term questions remain about how to balance water supply and demand.

“Chances are that four years of compensated conservation will get us out of this emergency situation, but it won’t solve our problem in the long term,” Porter said. “We need to find a way to rely on less water from the Colorado River.”

Managers of the Metropolitan Water District in Southern California are also considering how they can participate in reductions.

MWD Director-General Adel Hagekhalil said district officials had been working with Padilla and Sen. Dianne Feinstein (D-Calif.) on legislative language to ensure some funds were available to support conservation efforts in urban areas, such as: B. Cash rebates for property owners who remove grass.

Haberkorn reported from Washington and James from Phoenix.

'The Bold And The Beautiful' Spoilers: Does Taylor Hayes (Krista Allen) Need A New Love Interest?

PnB Rock’s stolen jewelry could be key to solving killing

Another Spending Siren for Joe Manchin