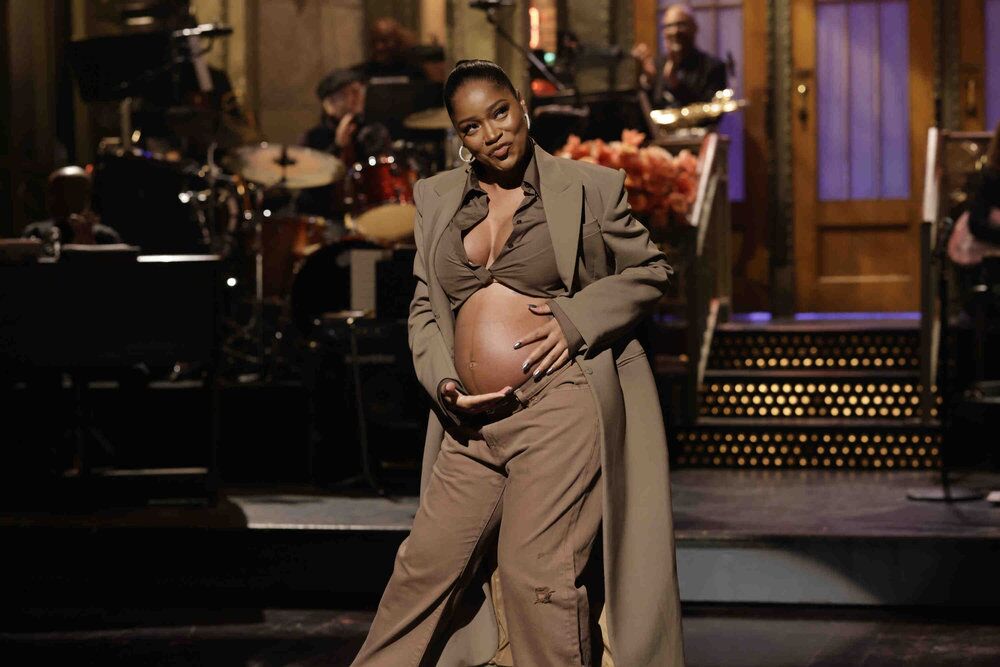 Host Keke Palmer and musical guest SZA had some big news to share on this weekend’s episode of Saturday Night Live.

During her opening monologue, Palmer dramatically revealed her pregnancy by showing off her baby bump on live television for the first time. Later in the show, SZA announced the release date for her next album while performing her latest single, “Shirt.”

“I’m particularly excited to be here…because some rumors are doing the rounds,” Palmer told the studio audience. “People have been like in my comments, ‘Keke is having a baby. Keke is pregnant.” And let me be clear: it’s me.”

As if on cue, the “Nope” star ripped open her brown trench coat with dramatic flair and rocked her bare baby bump as the crowd erupted in cheers. After enjoying the applause and dancing a little happily onstage, Palmer couldn’t help but laugh as she struggled to button her jacket back up.

“It sucks when people spread rumors about you on the internet, all of you. But it’s even worse when they’re right!” She continued.

“I’ve been trying so hard to keep it rock bottom because I’ve got a lot of stuff going on, you know? People kept coming up to me, ‘Congratulations!’ I say, ‘Shh, can you all stop? I have a liquor sponsorship at stake.” Cash the check! Then we can get to the damn baby shower.”

Palmer is expecting her first child with her boyfriend of more than a year, Darius Daulton Jackson, who shared an Instagram video of his partner partying behind the scenes on “SNL.” In the clip, a “relieved” Palmer says she “can’t wait to eat and lay down and sleep and just be so happy.”

During her first performance that night, SZA made a pretty big announcement of her own: her much-anticipated sophomore album SOS is due out Friday – five years after the release of her hit debut album Ctrl. At the end of the song, the due date for the “I Hate U” hitmaker’s next project appeared in giant letters on the screen behind her.

Other highlights of this week’s episode of “SNL” included a nostalgic cameo by cast member Kenan Thompson’s former “Kenan & Kel” co-star Kel Mitchell, and a particularly meta-sketch starring Palmer as a pregnant woman having an ultrasound.

“Honestly, this has been the greatest blessing and I’m so excited… I’m going to be a mom!” said the “Akeelah and the Bee” breakout at the top of the show. “Even though some people feel a little weird that I’m having a baby because I was a child actor, I just want to say, look, I’m 29. I’m an adult. i have sex I own a house. I stormed the Capitol on January 6th. You know – things adults do.”

“I’m just kidding,” she continued. “You all know I’m the same person I’ve always been and I’m proud of that. Actually – when I first got into comedy and dreamed of being on that stage, I asked myself, “Keke, who are you going to be?” … And now that I’m here, I can tell you exactly , who I am. Baby, I’m Keke Palmer.”

College Football Playoff primer: Everything you need to know

Who is self-proclaimed misogynist Andrew Tate?