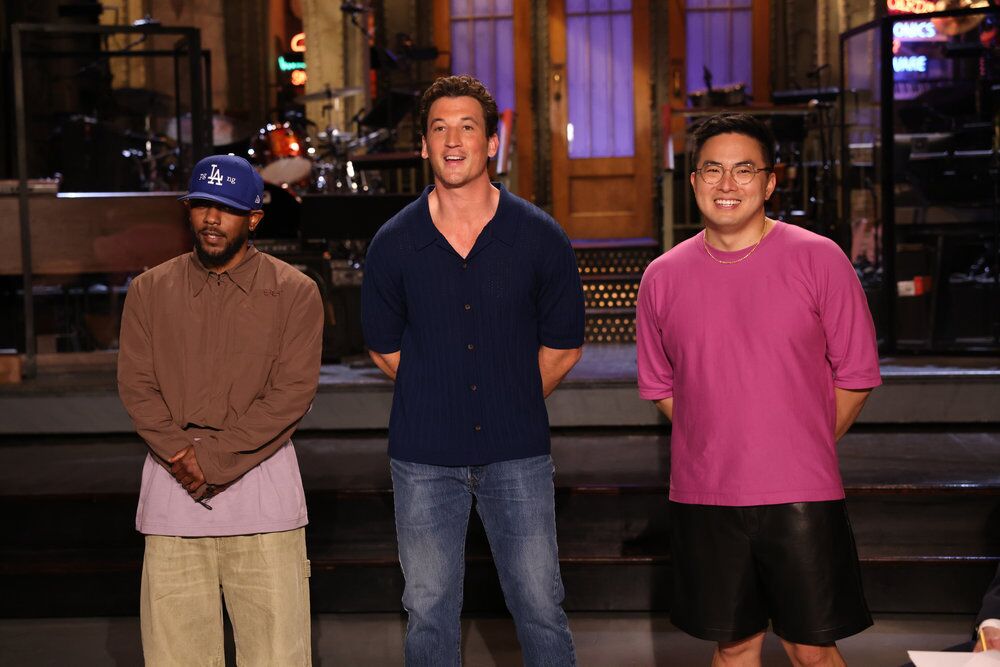 When Saturday Night Live returned for its 48th season this weekend, the granddaddy of all sketch shows ripped itself apart before anyone else could. In a cold open, host Miles Teller and cast member Andrew Dismukes played Peyton and Eli Manning, hosts of ESPN’s “ManningCast.” But instead of providing play-by-play commentary on Monday night football, they critiqued the premiere episode’s “opening sketch”.

“Let’s see what they came up with all summer,” they said, watching the sketch-in-a-sketch — an intentionally wooden number that featured every clumsy comedy move imaginable.

It was a clever way to address the challenges facing the iconic NBC comedy, with the loss of a sports team’s worth of cast members between seasons (including Pete Davidson, Kate McKinnon and Aidy Bryant) and the addition of four new faces. The preemptive strike was also a smart move given “SNL’s” lower profile as a relevant or reliable source of comedy. But even with the hilarious, self-deprecating opener, the first episode of the new season was neither a smash hit nor a total flop. It was mediocre, which is perhaps the worst place for a series whose writing, particularly its political satire, hasn’t surfaced in a while. Like so many “SNL” episodes before it, the lesson started off strong, losing momentum with every sketch save for two dynamic performances by musical guest Kendrick Lamar.

Executive producer Lorne Michaels called this season a “transitional year” after stars Davidson, McKinnon and Bryant left, along with Kyle Mooney, Melissa Villaseñor, Aristotle Athari, Alex Moffat and Chris Redd. Change is something “SNL” really needs, but Saturday showed that messing up the cast makes no difference if there’s not enough consistently strong material to work with.

The Cold Open focused on Trump (James Austin Johnson) at Mar-A-Lago. Peyton complained that there weren’t any “funny” impressions like Rudy Giuliani or Lindsay Graham. But those were all made by McKinnon, said Eli, noting “SNL’s” big loss of talent right at the start. They berated “newcomer” Michael Longfellow for freezing in front of the camera and noted a surprising fumble from “veteran Bowen Yang” (still one of the show’s bright spots) as the comedian, who played China’s President Xi, deliberately dictated the pronunciation from “Corgi.” Peyton then stopped the commentary to read out some disappointing “stats”: “only 14 attempted jokes, 1 mild laugh and 3 giggles.” The duo added Jon Hamm for comment. “What have you seen so far tonight?” They asked. “I don’t know, but it’s not a comedy,” Hamm said. “They didn’t even use Kenan [Thompson] still.”

The opening was fun, confident and creative. Another skit to lead the show, a game show titled “Send Something Normal,” also gave hope that the series could be headed in an upward direction. Four male contestants simply had to send a woman a standard direct message to win $100 million. Adam Levine (Mike Day), Armie Hammer (Johnson), Neil deGrasse Tyson (Thompson) and Yang (playing himself) all failed. Then it all went downhill, with a Charmin Bears sketch, a little bit about two-day Trader brothers in a bar who banged on women, and a missed opportunity to really mock Nicole Kidman’s pathetic AMC homage to the movies’ magic.

Saturday marked the start of Thompson’s 20th year on the sketch show, and judging by the episode, he’s still her ace up his sleeve. But it alone can’t bridge the gap between meh and worthwhile, and neither can a meta-sketch about your show’s weaknesses.

Jamie Foxx Recalls The Time An Actress Got High On Cocaine & Thought He Was Rick Fox!!

[PHOTOS] ‘This Is Us’ Finale: Jack Damon Flash-Forward