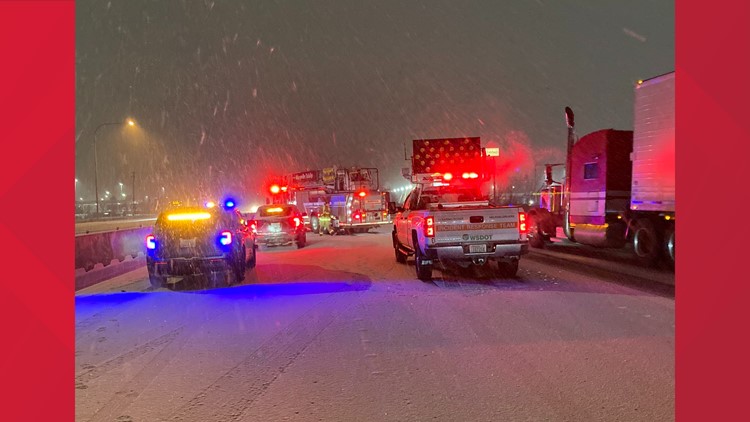 Servicemen are urging drivers to slow down, increase following distance and take more time to reach their destination as travel conditions worsen.

All four crashes occurred on Interstate 5, with two on I-5 north and two on I-5 south.

A collision block two lanes on the left of I-5 northward near Smokey Point occurred at about 7:20 p.m. with a two-mile fallback, according to WSDOT.

One Multi-vehicle collision on northbound I-5 near milepost 206 closed two lanes around 8 p.m. No injuries.

A collision between two pickup trucks on I-5 southbound was blocking the right lane near the 209 marker and causing minor injuries, according to Washington State Patrol Soldier Kelsey Harding.

“Snow is covering (I-5)! Again, slowing down and increasing distance follow,” Harding tweeted.

Tips for driving in snow and ice:

Airlines are calling for early flight cancellations in the hope of staving off a nationwide domino effect. Work is underway to ensure other flights can depart normally after the winter storm system passes.

A Sea-Tac spokesman said: “We have up to 46 different pieces of equipment set up to go from snow plows to sand trucks. “Then the airlines from their point of view are working on their de-icing equipment.”

Snow will fall just before the busiest travel days during the holiday season, which are expected to be Thursday and Friday.

Snow isn’t the only concern for many people across the Puget Sound. The low-temperature forecast has prompted some counties to open cold-weather shelters to anyone looking to warm up and provide extra beds for the homeless.

'Quordle' today: See each 'Quordle' answer and hints for December 20