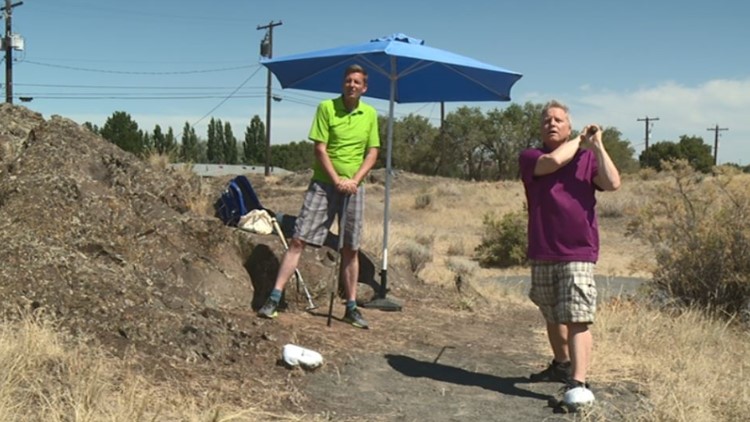 SOAP LAKE, Washington – Right in the middle of Washington state, the city of Soap Lake is a slice of heaven for the thousands of people who visit and live here. But this lakeside retreat is also home to a golf course from hell.

“You are on the Lava Links golf course,” said town historian Burr Beckwith. “It’s a 9-hole golf course, kind of pitch and putt. You just need two clubs, a putter and a nine iron.”

We surveyed the course and counted nine red flags posted at various spots on a property filled with sagebrush, sand and basalt rock.

“It’s a bit like playing golf on the moon, if you can imagine it,” Beckwith said.

People in Soap Lake said this property was once an eyesore until about 20 years ago when then-Mayor De Vaun Black started his tractor and drove around, trailing a railroad tie.

“It wasn’t a comfortable place so this was a big improvement,” said Beckwith.

Locals say Lava Links is fun, free and not to be taken seriously. Nels Borg once scored a hole-in-one when his ball hit some rocks, bounced high in the air and trickled through a sagebrush bush onto the sand that served as the putting green.

Golfers have great advice on playing Lava Links. Play early in the morning or at dusk.

“Because it gets damn hot in here,” Beckwith explained.

Click on the video to see these two bad sports trying Lava Links for the first time!

“You have to go and experience it for yourself,” Beckwith said. “Decide for yourself and as I said, you don’t pay for it either.”

There is one more point about Lava Links. It may not look like much, but it may be the greenest golf course in the world. Not one square inch of space is ever watered.

“And of course we’re in an extreme drought here,” Beckwith said. “Every water you save is a good cause.”

A special thanks to Dulyfixed Small Business Solutions for permission to use their drone footage of Lava Links.

Meta is shutting down Facebook 'Neighborhoods' for local communities