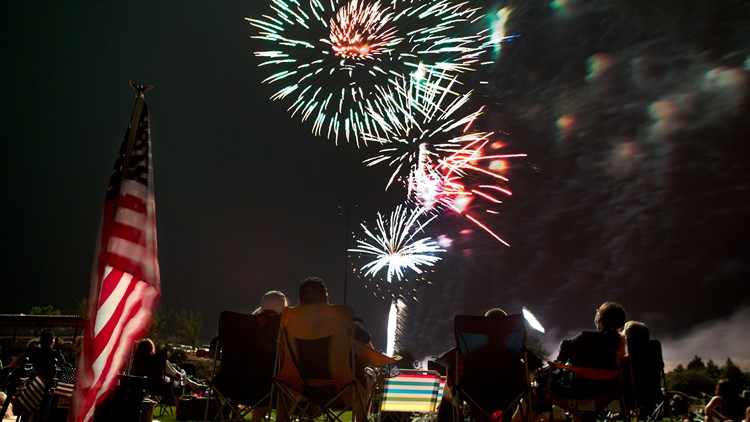 Some cities will remain dark on Independence Day due to fire hazards and looming pandemic-related shortages.

PHOENIX — Skies over a variety of western U.S. cities will remain dark for the third straight July 4 as some large fireworks displays are canceled again this year, this time over dry-weather fire concerns, along with pandemic-related supply or staffing issues.

The city of Phoenix said it canceled its three major Independence Day expos because it was unable to source the necessary fireworks due to supply chain issues. Displays in several other metro cities in Phoenix are still on.

Flagstaff in northern Arizona will hold its annual Independence Day parade through the city’s historic downtown, but a new laser light show will replace the standard pyrotechnic display amid concerns about starting wildfires.

Wildfire has engulfed the mountainous city in recent weeks, while another burned farther north, prompting hundreds of people to evacuate.

“The decision was made early because we wanted people to be able to make plans with their families,” said Sarah Langley, spokeswoman for the City of Flagstaff.

Firefighters in some cities fear the cancellations could prompt some people to increase their use of fireworks in residential areas.

“We’re usually concerned about homes and dry brush being exposed to sparks and fire,” said Phoenix Fire spokesman Capt. Evan Gammage. “We get so many calls this time of year.”

In New Mexico, the most destructive wildfire season in modern history won’t stop that state’s major cities, including Albuquerque and Santa Fe, from holding fireworks on July 4th under the supervision of fire departments.

Many local jurisdictions are still banning the private use of firecrackers amid a punishing drought that is persisting despite the recent arrival of summer monsoon rains.

Some national forests in the US Southwest eased or lifted fire restrictions, welcoming visitors to vast areas temporarily closed due to wildfire danger. Fireworks are strictly prohibited in state forests

In Sacramento, Cal Expo officials announced they will not be holding fireworks due to staff and resource shortages. Instead, they focus on the California State Fair & Food Festival, which takes place during the last two weeks of July.

In Lompoc, on California’s central coast, the annual Fourth of July fireworks show will not take place due to concerns about potential fire hazards.

A popular fireworks show in the northern San Joaquin Valley, which brought tens of thousands of people to Lake Don Pedro in California in pre-pandemic times, has been canceled due to drought issues, including the lake’s projected low level.

“The safety of our guests and good stewardship of the land entrusted to us are our top priorities,” Don Pedro Recreation Agency said in a statement.

The fire threat also prompted Lakewood and Castle Rock in Colorado to cancel their pyrotechnic performances. However, a fireworks show is scheduled for July 3 at Denver’s Civic Center Park on Independence Eve with live music from the Colorado Symphony.

Southgate Mall in Missoula, Montana, has canceled its annual Fourth of July celebration and fireworks show without explanation.

Elsewhere in the US, some North Carolina cities have canceled showings after a recent firecracker-related explosion killed a man on a small farm and destroyed a large stockpile of firecrackers in a related fire.

In Minneapolis, a fireworks display over the Mississippi will not take place due to staff shortages and construction at a nearby park.