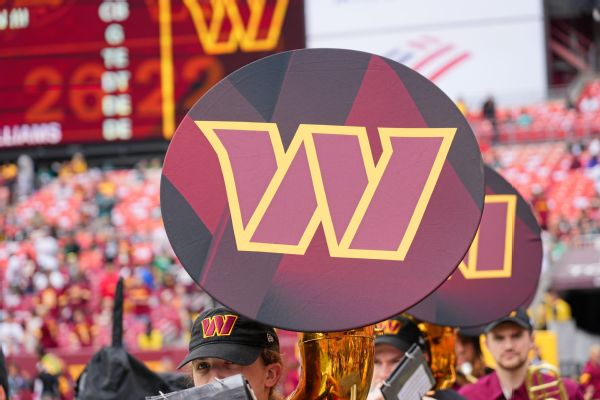 The US Attorney’s Office in the Eastern District of Virginia has opened a criminal investigation into allegations that the Washington Commanders were involved in financial irregularities, two sources familiar with the matter confirmed to ESPN on Wednesday.

The sources said prosecutors are focused on multiple areas and that the investigation was sparked by a letter the House Committee on Oversight and Reform sent to the Federal Trade Commission and several attorneys general in April alleging fraudulent business practices. Attorneys general in Virginia and Washington, DC are also investigating allegations of financial impropriety.

Team spokesman Jean Medina did not immediately comment, but provided a statement from Holland & Knight attorney John Brownlee, who represents the Commanders.

“It is not surprising that ESPN is publishing more untruths based solely on anonymous sources given today’s announcement,” the statement said. “…We are confident that after these agencies have had an opportunity to review the documents and complete their work, they will come to the same conclusion as the team’s internal review – that these claims are simply not true.”

When asked Wednesday whether the league was aware of the federal investigation, NFL spokesman Brian McCarthy said, “We will decline to comment.”

White is leading the NFL’s second investigation into matters involving alleged sexual misconduct at Snyder’s organization, including the owner’s alleged sexual assault of a woman on his plane in April 2009. It is not clear when White will conclude. The initial investigation, led by Beth Wilkinson, resulted in a $10 million fine and suspension for Snyder, but resulted in no written report.

Both the US Attorney’s Office and the FTC declined to comment.

The House Committee said in its letter to the FTC that it found evidence of deceptive business practices spanning more than a decade, including withholding ticketing revenue from visiting teams and refundable down payments from fans. The committee, through former employee testimony and access to emails and documents, outlined a pattern of financial impropriety by owner Dan Snyder and team leaders. At one point in 2016, the team withheld up to $5 million from 2,000 season ticket holders and also withheld prorated earnings from the league, according to the committee.

A former employee testified before Congress and said the team has two separate financial books: one with underreported ticketing revenue going to the NFL and the full, complete picture. According to witnesses, Snyder was aware of the numbers being shared with the league while at the same time being privy to the actual data. The business practice was known as “juice” in Washington’s front office.

According to other testimonies, financial misconduct included intentionally making it difficult for season ticket holders to recover refundable deposit money, counting some of that leftover funds as another type of revenue that does not need to be shared with the league, and shifting money from ticket sales for NFL games to other events at FedEx Field to hide that money from the league. The committee shared spreadsheet data in the letter showing evidence of deposits that were not returned. Citing emails and testimony from Jason Friedman, a longtime vice president of sales and customer service, the letter said ticket sales for Washington games were based on a 2013 Kenny Chesney concert and a 2014 Navy vs Notre Dame was shifted to Juice revenue and keep her off the books shared with the NFL.

“The Washington Commanders have worked fully with federal and state investigators since the House Oversight Review Committee issued its letter on March 12. “The team has produced tens of thousands of records in response to the requests. The investigation, which has been mischaracterized by ESPN’s anonymous sources, is based on the same baseless allegations made by a disgruntled former employee, Jason Friedman, who is also represented by the law firm Katz Banks.”

Also on Wednesday, Dan and Tanya Snyder announced that they have engaged Bank of America Securities to review potential transactions with the team. It’s not clear what those transactions might be, whether they were selling the team or pursuing minority partners.

ESPN senior contributors Seth Wickersham and Tisha Thompson and The Associated Press contributed to this report.

Op-Ed: Politics is flooded with cash. Divert more of it to young campaign workers

Ravens teammates stump for Lamar Jackson to get deal