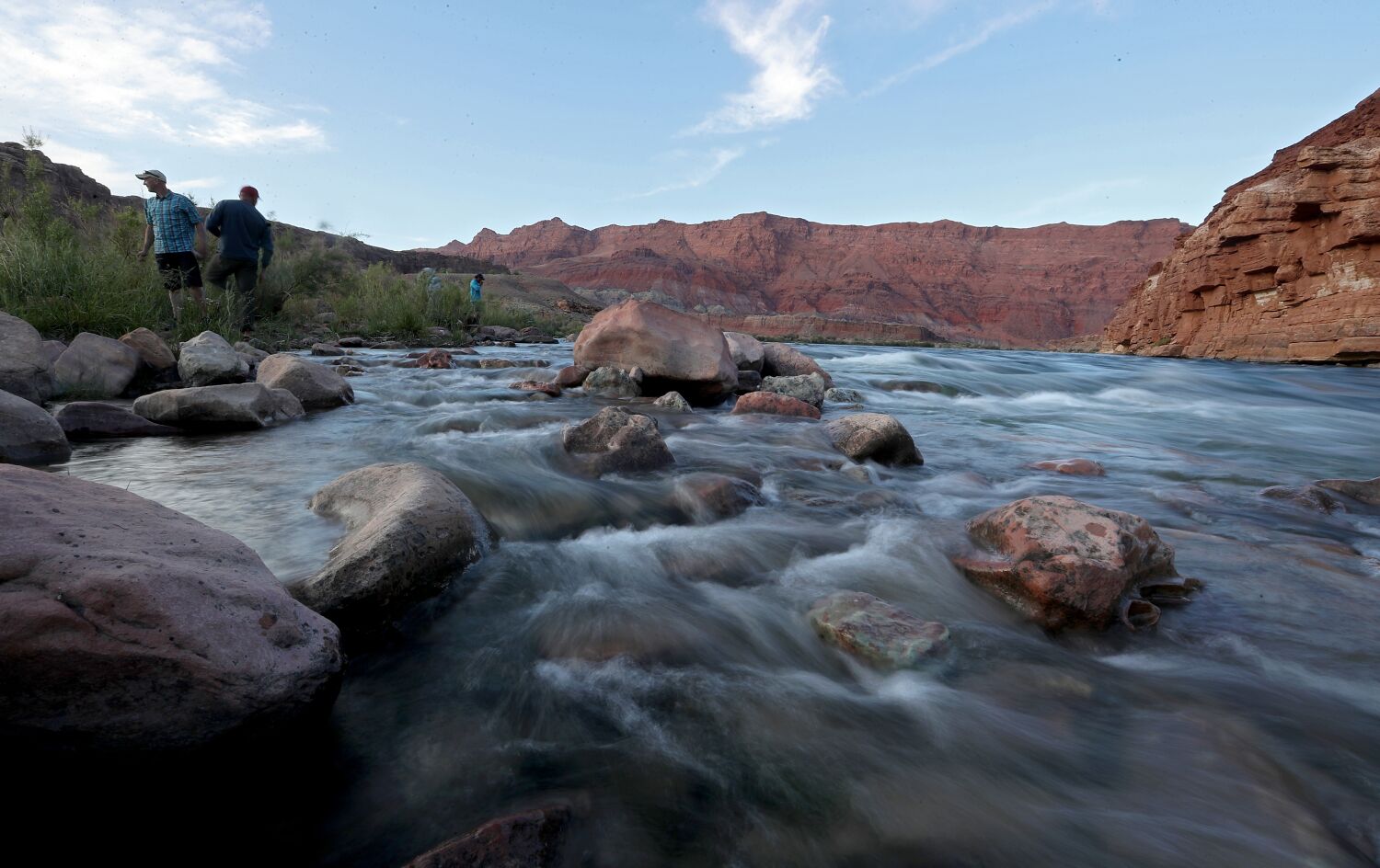 With the Colorado River in crisis and reservoir levels falling, California’s water authorities, which depend on the river, plan to significantly reduce their water use from the river starting next year.

As a result, officials at Southern California’s Metropolitan Water District said they plan to support mandatory safeguards next year to begin rationing water for cities and local authorities that serve 19 million people in six counties.

California is permitted to use 4.4 million acre-feet of Colorado River water per year, more than any other state. The water flows through canals to farmlands in Imperial and Riverside counties and to cities from Los Angeles to San Diego.

Four water districts and the state’s Colorado River Board said in a letter to the federal government Wednesday that they are proposing to reduce water use by up to 400,000 acre-feet per year beginning in 2023. That would equate to about 9% of the state’s total water allocation from the river for the next four years through 2026.

Details of how the water districts will achieve these reductions have yet to be worked out. But agency leaders said they are preparing to take conservation measures that will affect both cities and agricultural areas.

“California is stepping up and leading the way in addressing this situation through action and significant reductions,” said JB Hamby, Imperial Irrigation District board member.

Hamby said the cuts “will make serious sacrifices in California, but it’s necessary to keep the system from crashing.”

California water authorities were under pressure to make significant water cuts. Federal officials in June asked the seven states that depend on the Colorado River to submit plans to drastically reduce annual water diversions by 2 million to 4 million acre-feet. But negotiations between the states became tense and acrimonious, and no agreement was reached.

Lake Mead and Lake Powell, the river’s two largest reservoirs, are now nearly three-quarters empty. Without major cuts in water use, the latest forecasts show a growing risk that reservoirs will approach ‘dead end’ levels, where water would no longer flow downstream through the dams that back them up.

But California’s pledge falls far short of the target set by federal officials, and state water officials will likely continue to face pressure to accept larger cuts. But California water agency managers said they hope their voluntary proposal will help catalyze water-saving contributions from others across the Colorado River Basin to keep the reservoirs from bottoming out.

Since 2000, the river’s flow has shrunk dramatically during a mega-drought that research says is being exacerbated by global warming from fossil fuel burning. Scientists have warned that the American west is undergoing a climate-related desiccation and will need to adapt to hotter, drier conditions.

“Given the severe drought conditions across the region and dangerously low water levels in the reservoirs, we firmly believe that all water users in the basin must immediately take voluntary action to stabilize water supplies,” said California’s Colorado River Board and Colorado River Board executives four water districts in their letter to the US Department of the Interior and Bureau of Reclamation.

They said that although no multi-state agreement has been reached, California authorities “propose to take voluntary action now” and will seek federal funding in the coming months to help with conservation efforts.

Metropolitan Water District officials said they intend to recommend that their board enact mandatory conservation measures throughout Southern California next year. This includes cutting back on supplies by giving each local supplier a water allocation to meet.

“We put in place this allocation mechanism where every agency that gets water from Metropolitan has to reduce consumption,” said Deven Upadhyay, deputy director general of MWD.

Upadhyay said the percentage reduction has yet to be determined and will likely be decided by early next year. Any agency that overused its water allocation would face penalties, which it would pass on to its customers.

The district similarly rationed water during previous droughts in 2009 and 2015.

Already this year, six of MWD’s 26 affiliates in parts of Los Angeles, Ventura and San Bernardino counties are subject to mandatory restrictions due to severely limited supplies available from the State Water Project, which supplies water from Northern California.

The new round of conservation measures is expected to expand mandatory restrictions across the MWD’s service area.

In recent years, the Metropolitan Water District has also paid some farmers who have agreed to leave their fields dry and unplanted. Bill Hasencamp, MWD’s manager for Colorado River resources, said he and others have been speaking with leaders of the Palo Verde Irrigation District in Blythe about conserving more water by increasing fallow farmland over the next year.

Hasencamp said there had been “a lot of pointers” from other states pointing towards California.

“We want to show that we save water, whether others join us or not,” said Hasencamp. “We are still in talks with Arizona to see what Arizona can bring to the table.”

Hasencamp said he expects continued criticism that the cuts are not enough. At a recent conference in New Mexico, state officials asked federal officials to consider evaporative losses from reservoirs and canals, and federal officials said they were developing a proposal to do so.

The proposal has raised concerns among California water managers because including evaporative losses in accounting on a proportional basis could result in significant reductions.

“We’re trying this voluntary approach that can achieve the same savings without having to impose a different approach that could lead to litigation and further acrimony down the river,” Hasencamp said.

The Imperial Irrigation District controls most of the river and supplies water to Imperial Valley farms, which produce hay and a wide variety of vegetables, among other crops. The district is committed to absorbing most of California’s reductions, up to 250,000 acre-feet of water per year.

Martinez said the district is also pledging to reduce water use based on a “firm state and federal commitment to addressing impacts on the Salton Sea.”

District officials have warned that reducing water use will accelerate the decline of the Salton Sea, where the receding water is leaving an exposed seabed that is spewing lung-damaging dust. They have called for funding for projects at the lake to control dust and create habitat for birds.

The federal government has funds available from the newly passed Anti-Inflation Act, which includes $4 billion for drought-fighting measures and protection programs. Some of the money can be used across the region to pay farmers and others to voluntarily use less water.

But IID officials have said they plan to prioritize conservation efforts based on improving water efficiency rather than dropping fields because it will allow growers to continue farming.

These new conservation programs have yet to be approved by the district board.

Brittney Griner fears being forgotten by the US in Russia