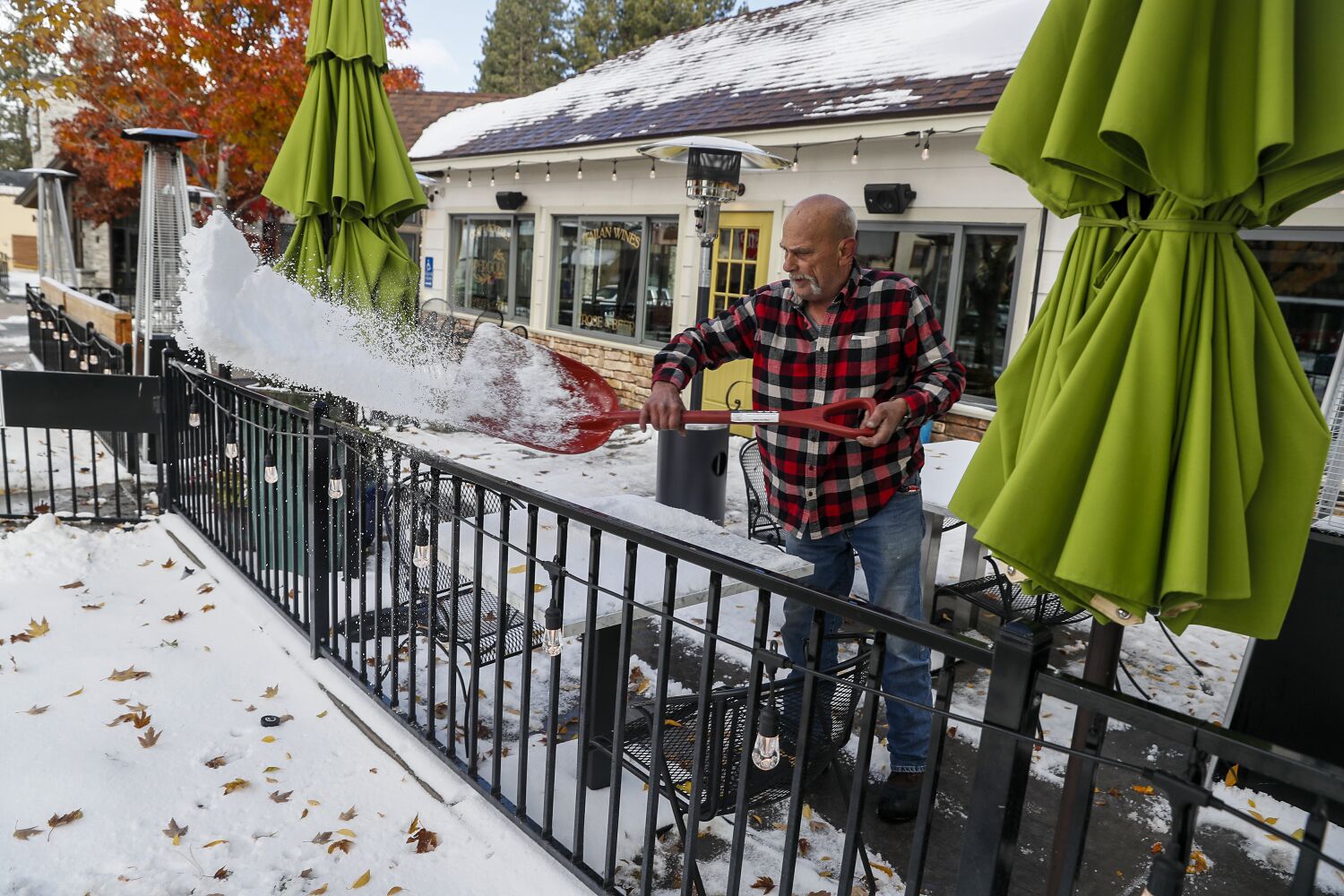 The Southern California mountains saw their first snowfall of the season Thursday morning as a cold front lingered over the region, bringing cool temperatures, wind and rain.

Mountain areas from Los Angeles County to San Diego County saw up to 2 inches of snow, accompanied by winds of 20 to 30 miles per hour and gusts of up to 45 miles per hour, according to National Weather Service forecasters. Flurries lasted all morning until around noon.

Thunderstorm and heavy fog conditions prompted the California Highway Patrol to provide escorts across the top of the Grapevine on Interstate 5 Thursday morning, but no major slowdowns or incidents were reported.

“It’s a thunderstorm, but snow is falling instead of rain,” said Schenk. “You don’t see that much here, so it can be pretty exciting.”

There were “some pretty heavy showers and snow showers” on Thursday morning, Schenk said.

Temperatures across the region on Thursday ranged from the mid-50s to the low 70s, with strong winds — especially along the coast — making the air even cooler. Mountain areas were 20 to 30 degrees cooler than usual on Thursday, she said, with highs near Big Bear hitting the mid-30s.

Thursday is “certainly the coldest day of the week,” said Schenk. “We expect a slight recovery [Friday]but temperatures will still be below normal everywhere.”

A frost watch was issued for Antelope Valley and other areas north of Ventura County, including Ojai Valley, for Thursday night through Friday morning, with temperatures dipping to 28 degrees.

The Malibu coast and Santa Monica mountains are subject to a wind warning Thursday afternoon through Friday morning, with gusts of up to 40 miles per hour expected, according to the National Weather Service. The Santa Clarita Valley is subject to a similar wind warning, with strong gusts expected Thursday morning through early Friday.

Winds were high on the coast, Schenk said, with Huntington Beach registering winds of 35 miles per hour early Thursday and San Clemente beaches gusting up to 50 miles per hour.

Much of the non-snow precipitation in the region eased on Thursday morning, although forecasts show fresh storms hitting the region early next week are likely to bring more rain.

The rain was “pretty much over, today there are only a few snow showers up in the mountains,” said Boldt on Thursday. But by Monday and Tuesday next week, Boldt said, a new system is due to move into the area, which will bring a good chance of rain along with more wind and cooler temperatures.

“It could be continued rain into Wednesday,” said Boldt.

Some climate experts are optimistic that the back-to-back storms will bring a relatively uniform perception to California’s drought-stricken terrain.

David Swain, climate scientist at UCLA, noticed the increased rainfall across the state could have many positive benefits – especially if it continues to rain steadily without violent storms – including End the fire season in Northern California.

College football Week 10 - A guide to the biggest games

Bold abroad with NATO, Biden is more measured at home