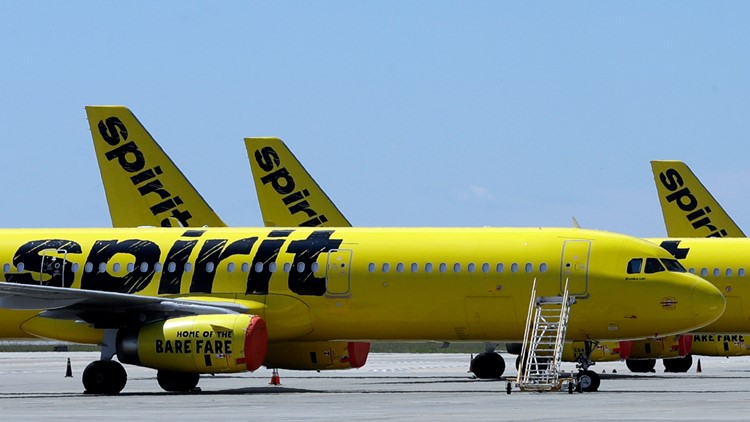 Spirit Airlines and Frontier Airlines on Wednesday agreed to abandon their merger proposal, opening the doors to JetBlue to acquire Spirit.

WASHINGTON — Spirit Airlines and Frontier Airlines on Wednesday agreed to abandon their merger proposal, paving the way for JetBlue Airways to acquire Spirit.

Spirit, the largest low-cost airline in the United States, said it is still in talks with JetBlue “and expects to provide another update in the near future.”

Spirit and Frontier’s decision to end their deal was announced while Spirit shareholders were still voting on the proposal. It was evident that despite the support of the Spirit board, shareholders were willing to reject the frontier deal.

Frontier’s offer was valued at more than $2.6 billion in cash and stock, well below JetBlue’s $3.7 billion cash offer.

A combination of Spirit with either Frontier or JetBlue would create the country’s fifth-largest airline, although it would still be quite a bit smaller than American, United, Delta and Southwest.

The Biden administration would likely always scrutinize both deals closely. The President and his chief antitrust officer at the Justice Department have both expressed an aversion to corporate mergers.

Some analysts said that the small size of Frontier and Spirit would have gotten them a pass from antitrust authorities in previous governments, but not now. Still, the JetBlue deal appeared more problematic, in part because the Justice Department was already seeking the dissolution of a regional partnership in the Northeast between JetBlue and American Airlines.

Frontier and Spirit announced their deal Feb. 7, saying they would create a giant discount airline that would save consumers $1 billion in airfare annually by creating a powerful new competitor for American, United, Delta and Southwest would.

The proposal would have brought together two very similar airlines – both lure travelers with rock-bottom fares but charge for some things that larger airlines include in most tickets, from soft drinks to space for a bag in the overhead compartment.

They even share financial roots: Bill Franke’s private equity firm Indigo Partners invested in Spirit before taking an 82% stake in Frontier and investing in low-cost airlines in Mexico, Chile and Hungary.

Frontier and Spirit said that together they would have enough planes to fly many new routes not yet served by a low-cost carrier, and in the process they would create 10,000 new jobs by 2026.

A merger would also address one of the biggest consumer complaints about Frontier and Spirit: They’re so small and have such limited flight schedules that if they cancel a flight, it can take days for all passengers to find seats on later flights.

JetBlue CEO Robin Hayes decided he couldn’t sit back and watch as Frontier and Spirit grew bigger than his airline. On April 5, JetBlue started a bidding war by announcing its own plan to acquire Spirit.

JetBlue felt that buying Spirit was the best way to quickly add planes and pilots and break out of the second tier of US airlines. JetBlue argued that it would also help consumers by cutting tariffs more effectively than Frontier and Spirit.

New York-based JetBlue launched an angry campaign to convince Spirit shareholders to reject Frontier’s offer. It worked — and forced Spirit’s board to postpone a vote on the Frontier proposal four times. In July, Frontier CEO Barry Biffle admitted his team was losing heavily.

Both Frontier and JetBlue increased their bids, including an increase in liquidation fees for Spirit shareholders.

In the end, Frontier offered $4.13 in cash plus 1.9126 shares of his stock for each share of Spirit. That was worth about $2.65 billion at Frontier’s closing price on Tuesday, and Spirit shareholders would own 48.5% of the combined company.

JetBlue’s offer was more straightforward — $33.50 per share, plus a ticking fee to cover delays in regulatory review, which would bring the value of the offer to $3.7 billion, all in cash .

JetBlue investors appear unfazed by the airline’s pursuit of Spirit. Since JetBlue took part in the bid, its shares have fallen 45%, more than any other U.S. airline except for regional carrier Mesa.

Once Spirit’s fate is settled, analysts believe more mergers among the smaller airlines are possible — but likely no deals with American, United, Delta, or Southwest due to antitrust issues.

JetBlue and Alaska Airlines fought a 2016 bid war over Virgin America, which Seattle-based Alaska won. Alaska’s strength on the west coast and JetBlue’s network on the east coast and the Caribbean have long made them the subject of merger speculation.

Kendrick Lamar wants you to feel like that viral guard

Why many Black men want Caruso, not Karen Bass as L.A. mayor