The beauty of sport is that you can relive some of the great moments through photos that turn the action on the field into unforgettable memories. Suman Chattopadhyay, a renowned sports photographer from Kolkata, has been clicking on such moments for the past 41 years.

An avid cricket fan since childhood, Chattopadhyay shared his passion and profession in episode 5 of ‘Dream Big Stories’, a project of SK Brand Studio made by Dream11.

His relationship with cricket as a cameraman began by chance, or perhaps by fate. Chattopadhyay recalls:

“In 1977, my father, a photographer for the Amrit Bazar Corporation, took me to a game in Eden Gardens. He left the camera with me when Gavaskar was out. So I clicked on that picture. The next day, I saw that picture being published in the newspapers.” 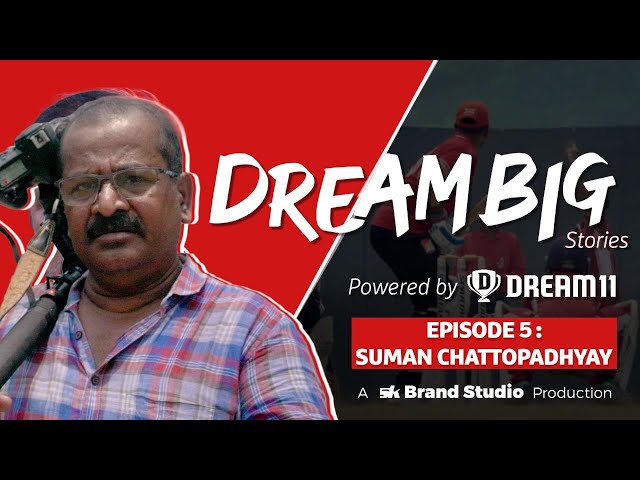 “It was my dream when the pictures I clicked on were published and people knew about me.”

He is very happy to have turned his cherished idea into reality. The cameraman noted:

“Today, the players know me by my name.”

Chattopadhyay has been a sports photographer since 1981. He covered the 1987 World Cup in India as well as the 1992 edition in Australia and New Zealand. According to him, that tour took him to the next level in his career as a photographer. He recalls:

“I even met Sir Don Bradman at his house. I gave him a Punjabi kurta. I clicked Imran Khan reading namaz before the semi-final. In Auckland, I clicked Sachin Tendulkar sleeping in the dressing room when Richard Hadlee looked on. I clicked on 20-25 rare and exclusive photos”.

Chattopadhyay first met Sachin Tendulkar when he was 15 years old and offered to click on his picture. The senior photographer suggested a unique photo so excellent that Master Blaster took it everywhere.

“I suggested that it would make a great picture if he was on his parents’ lap. And he welcomed my offer for this photo. He used to take that photo with him everywhere in the world. In his room, on the table where he kept his pooja idol, right next to it, he would put a picture taken with his parents. He carried it with him on all his tours.”

Sharing tips on how to be a good sports photographer, he says:

“In photography, the key element is timing. I try to see the ball perfectly. I try to keep track of how players play. It has become a sync system in my body, so I don’t miss the action shots.”

He concluded that he would continue to live his sports photography dreams as long as he remained healthy, saying:

“As much as possible, I will continue to click on the best moments and exclusive photos, which will be treasured for generations to come.”

Chattopadhyay’s happy click journey is a dream story told through the lens of sports legends.

Chris Rock Has Some Thoughts on the Depp–Heard Trial