Back in the day, desktop computer speakers were actually important. That was more than a decade ago, long before gaming headsets took over and wireless Bluetooth headphones were good. In the early 2000s, more people also had true desktop computers chained to desks, so it was worth investing a bit in decent audio. SteelSeries’ new Arena 9 surround sound PC speakers remind me of that era, a time when I eagerly ran cables through my dorm room to connect Logitech’s legendary Z-680 surround sound speakers. (Apologies to anyone who lived near me. I tried to keep things civil, I swear!)

Thankfully, these days it’s not that difficult to switch to surround sound — although it’s still going to cost you a lot. The $550 Arena 9 connects via USB, so you don’t have to worry about a dedicated sound card, and they have wireless rear satellites that just need to be hooked up to power and each other. Nothing needs to be relocated to the front speakers. That solves a major pain point and makes the Arena 9 a far more viable option for cable averse. But is it worth setting up a surround sound system when gaming headphones are cheaper, more immersive, and friendlier to your neighbors? You have to decide that yourself. 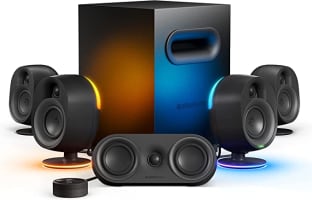 Assuming you want to fill your room with speakers, the Arena 9s are remarkable for even existing. There aren’t many PC alternatives today, and they’re mostly several years old, like Logitech’s Z906 (released in 2011). You could, of course, set up an amp and hook up whatever speakers you wanted, but someone who does that probably isn’t in the market for a self-contained kit. SteelSeries strikes a delicate balance between complexity and convenience – for the most part I think Arena 9 is a success.

Inside the box you’ll find two front speakers (both equipped with RGB lighting along their base and rear), two wireless rear satellites, a center channel, a control module and a 6.5-inch downward-firing subwoofer. The two-way speakers don’t feel premium, but with their matte plastic casing, they should blend in with your keyboards and other PC components. They’re also a lot lighter than I expected, which is rarely a good sign when it comes to audio gear. My biggest criticism, however, is the wiring. The front and center speakers are hardwired to the back of the subwoofer. As far as I can tell, there isn’t an easy way to replace these wires, so you’ll have to chuck the entire speaker if something goes wrong (or get very proficient at soldering). I would much rather have detachable cables than redundant RGB lighting.

I can understand why SteelSeries chose to place all of their audio inputs behind the subwoofer. It removes more cables from your desk and is a smart place to house the amp and power components. However, this is also the only place with an aux port, so you’ll need to attach a long 3.5mm cable if you want to connect other devices. Luckily, there’s Bluetooth support too, making it easy to stream music wirelessly when your computer is off. For devices with digital audio, like the PlayStation 5, you can connect via an optical cable (there’s also an optical-out connector to pass sound to other devices).

Unfortunately, the PS5 can only output 2.1 sound (two front speakers and the subwoofer) via optical or USB. You could upmix this audio through all your speakers via the control pod, but that would still just be simulated surround. That’s a shame for anyone who wants a system that works seamlessly across their gaming systems and computers. It’s doubly disappointing, too, since the Logitech Z-680 took over Dolby Digital and DTS surround processing from consoles and other devices way back in 2003 for just $400. For the price, I’m surprised Arena 9 can’t handle their own decoding.

At least SteelSeries isn’t trying to push the Arena 9 as the ideal surround sound system for your home theater. Notably, these are the first 5.1 gaming speakers to work over a single USB connection. Typically, PC speakers rely on either three 3.5mm jacks or a digital connection such as optical or coaxial. Since it relies on USB, setup is easy – even for laptop users who typically need some sort of external sound card to use a 5.1 system.

It only took a few minutes to connect the Arena 9’s front and center speakers to the subwoofer, while the rear sat on bookshelves behind my desk chair. This was a bit more of a hassle, as I had to find a nearby outlet to power the right rear speaker and stretch a cable across the floor to the left. (If you have a lot of space, you can also use an extra-long RCA cable to connect these speakers.) On my desk, the Arena 9 looks cleaner than the huge KEF Q150 bookshelves I usually use.

I’ll be honest, but when it comes to speakers, I pay much more attention to sound quality than aesthetics. Despite its relatively small size and average build quality, the Arena 9 sounds fantastic in games and movies. The opening monster attack in Netflix The Sea Creature rocked my office with explosions, the sound of huge waves and the rumble of a pissed off monster. While playing Halo infinity, I felt completely immersed in every firefight, so much so that I could clearly hear enemies sneaking up behind me on the rear speakers. one Halo infinity Matchstick outfitting everyone with rocket launchers and skewers sounded like I was in the front row at a 15 minute fireworks show.

The Arena 9 are at their best when you can crank the volume up as much as possible – making them unsuitable for apartments and smaller homes. (Do as I say, not like me.) They’re peppy and energetic enough for games and movies with big soundscapes. However, I would have preferred a larger subwoofer. A ported 6.5-inch device for such an expensive system just feels limiting. I had to push the subwoofer’s volume knob almost to the max to get a satisfying amount of low-end punch. A bigger sub wouldn’t have to work as hard.

Twitter finally starts rolling out the edit button, but US users will have to wait