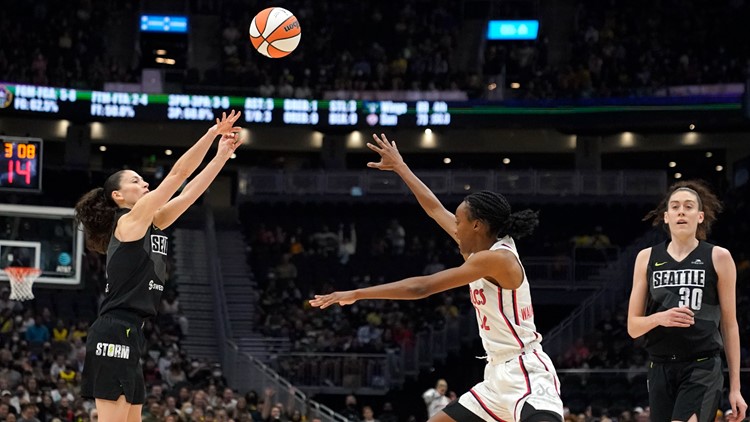 SEATTLE (AP) — Breanna Stewart had 21 points, 10 rebounds and eight assists, Sue Bird added season-bests of 18 points and 10 assists, and the Seattle Storm defeated the Washington Mystics 97-84 on Sunday to win their opening-round series.

4th seeded Seattle will play top seeded Las Vegas in the second round. The best-of-five series begins next Sunday in Las Vegas.

Jewell Loyd was 5 of 10 from 3-point range, ending with 19 points for the storm. Gabby Williams, who suffered a concussion in the third quarter and did not return, scored 14 points and Tina Charles added 10.

Ariel Atkins hit a 3-pointer 13 seconds into the third quarter to give the Mystics a 46-45 lead, but Stewart responded with a 3 down the other end and Seattle was never behind again. Stewart made a fade-away jump to extend the Storm’s lead to 17 points with 6 minutes left.

Natasha Cloud made 5 of 8 from 3-point range and ended up with 21 points for Washington. Atkins added 15 points and seven assists, Elena Delle Donne and Shatori Walker-Kimbrough each had 12 points, and Alysha Clark 10.