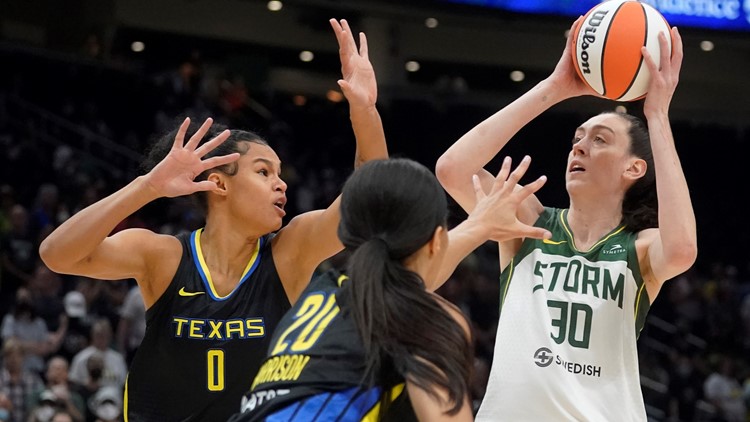 Breanna Stewart scored 15 of her 19 second-half points and Ezi Magbegor had 13 points to help the Seattle Storm beat the Dallas Wings 83-74 on Tuesday.

SEATTLE (AP) — Breanna Stewart scored 15 of her 19 points in the second half and Ezi Magbegor had 13 points to help the Seattle Storm beat the Dallas Wings 83-74 on Tuesday.

Seattle (16-8) has won three straight games and five of the last six, tying a virtual tie with the Las Vegas Aces (15-7) for second place in WNBA standings. That’s a game behind Chicago Sky, the defending champions.

Teaira McCowan led Dallas with 18 points in 8-of-14 shooting, grabbed 10 rebounds and made two blocks. The rest of the team collectively shot 32.8% (19 of 58) from the field. Arike Ogunbowale finished with 12 points, while Tyasha Harris tied for her season high with 10 points and Satou Sabally also had 10 points.

Seattle finally took the lead at 6:51 in the third quarter after a sequence in which Stewart made a layup, a 3-pointer and a short jumper within 65 seconds and then found Sue Bird for a drive-and-. kick 3

With that assist in her 171st game @breannastewart becomes the third fastest player in @WNBA History with 3,000 points, 1,000 rebounds and 500 assists, behind only Maya Moore (163) and Candace Parker (170). pic.twitter.com/NbCVxQrfSw

Allisha Gray did not play for Dallas (10-14) (due to personal reasons). The Wings have lost four of their last five games.

Wanda Sykes wouldn't host the Oscars again after The Slap

After suspicious text, how Rams made Bobby Wagner deal real