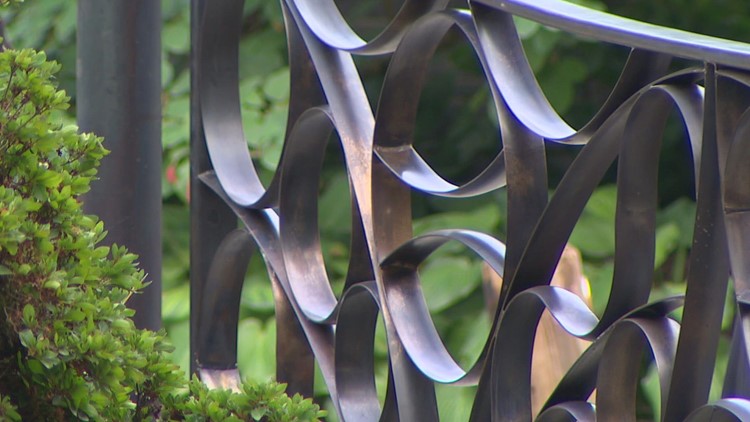 SEATTLE – The works of Seattle sculptor Gerard Tsutakawa can be seen throughout the city, from a metal sculpture of a baseball glove in front of T-Mobile Park to an “ocean waves” sculpture installed in the Climate Pledge Arena.

But one of his works in the Washington Park Arboretum has special significance.

It’s a memorial gate that welcomes visitors at one of the park’s entrances, but it’s more than just a metal structure.

“They’re really a sign of welcome, they’re a sign of inclusion, and it’s a way of saying we care that you’re here,” said Jane Stonecipher, executive director of the Arboretum Foundation.

Tsutakawa’s father, artist George Tsutakawa, designed the gate, which was installed at the arboretum in 1976.

“His idea was to create some of these softer shapes, the more rounded shapes, and incorporate them into the design,” Tsutakawa said.

Gerard, who calls himself Gerry, was an apprentice at the time and built the gate. For decades it adorned the entrance to the Arboretum’s famous Azalea Path.

But in March 2020 the gate was stolen for scrap metal.

“It was just a downer to have the sadness at the start of COVID, and I think the other thing is that the arboretum is so loved by so many people,” Tsutakawa said.

Seattle Police Department detectives recovered parts of the gate, but not all. Gerard said he used what was salvaged to restore the memorial gate.

On Wednesday, the Arboretum Foundation held a ribbon-cutting ceremony to commemorate the return of the gate.

“In order to understand these goals, you actually have to go back to the original goals from 1976. The idea was that they were in honor of all the people who visited and loved the arboretum,” Stonecipher said.

According to the Arboretum Foundation’s website, a fundraiser raised at least $160,000 to help cover the cost of the gate’s materials, administration, and installation.

In January this year, Tsutakawa said he had started the remodeling process. In September it was installed and officially reopened.

“I find [my father] would be very happy if it works again and is installed again,” said Tsutakawa.

‘We’re broken.’ In the suburbs north of L.A., voters are fed up

‘The Young And The Restless’ Spoilers: Did Victor Newman (Eric Braeden) Get Rid Of Ashland Locke’s (Robert Newman) Body?