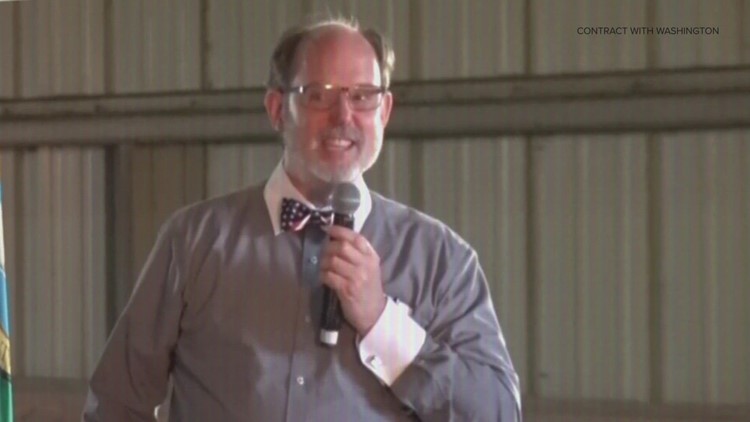 Speakers at “election integrity” events at churches claim to have evidence of voter registration irregularities or fraud. Here’s what we found.

They listened for hours as the presenters presented their evidence that national elections – even those in Skagit County – were marred by incompetence and fraud. The keynote speaker, a former university professor from Cincinnati, presented his widely debunked theory that democrats were pumping “ghost” ballots into voting machines.

“Because I have friends on both sides,” Swihart said. “That’s the difference between a politician and a preacher. Politicians have to worry about what other people think. I don’t.”

“When this kind of conspiracy theory hits the podium, it is given a degree of validity that it probably wouldn’t have,” said Grimmer.

“There are many questions. ‘What is the truth? Did something really happen?’,” said Swihart.

He said many in his community have those questions about the 2020 election and that’s why he agreed to hold the Skagit County Election Integrity Public Hearing.

“What interests me is the Skagit Valley. My heart goes to the people of this valley,” Swihart said.

Swihart’s personal story reflects that. In addition to founding his own church, he is a military veteran and he and his wife adopted and raised three children along with their biological children.

The presentation at Cowboy Church was notable for its “star power,” at least in the minds of those who believe the 2020 election was stolen from former President Trump.

“He won, and we all know it,” Douglas Frank told the cheering audience in the church as an image of Trump flashed onto the screen.

Frank, a former professor of mathematics at the University of Cincinnati, has traveled the country claiming that he has discovered a secret algorithm that proves that the Democrats are rigging the election.

Frank told the church crowd that his calculations showed Washington state and even Skagit County voter registration lists had been rigged by “virtual voters.”

“Your registry database is where you are being hacked. That’s where you’re losing the election. (Washington State is) filling out your registration with ghost voters,” Frank said from the stage.


The 57-page report by Professors Grimmer, Michael C. Herron and Matthew Tyler includes a dive into the “junk science” behind Frank’s calculations and concludes that they are “worthless” and wrong”.

But Grimmer said the average person wouldn’t know it when he heard Frank’s slick presentation.

“For people who are just going through their day-to-day lives, it’s impossible to know that the guy up there, an extremely well-spoken public speaker, is telling them something trivial. That’s not true at all,” said Grimmer.

Frank replies to Grimmer that “…he is a dim light” and says that Grimmer misinterpreted his calculations and focused on only a small part of Frank’s evidence.

“There is a lot of information beyond my IQ,” Swihart replied when asked if he understood the reasoning behind Frank’s presentation. “That’s way higher than my salary.”

“I had to ask myself what I could do as a citizen on the ground,” said Dave Griffin, retired Boeing ace.

Griffin returned home from last year’s Cowboy Church and has been busy organizing a volunteer effort to “clean up” voter registration lists in King County.

He collaborated with analysts who reviewed King County’s voter registration records and flagged voters who may have been improperly registered. After that, he and about 50 volunteers took to the streets to knock on doors from door to door to ask questions.

As a result, a report to the King County Board of Elections stated that the team discovered 444 “anomalies” in voter registration that could be evidence of fraud.

However, KING 5 investigators fact-checked some of the group’s claims and found inaccuracies in their claims.

Pastor Swihart believes many churches are discussing voter fraud but are keeping it private.

“I think they are private. Yes sir,” said Swihart.

Experts say it’s proof that the myth of voter fraud is penetrating deeper into our society.

“You might expect leaders to do a little better, but they also come under the same pressures that many people face when they want to tell their audience what the audience wants to hear,” said Grimmer. speak.

Millions could be dropped from Medicaid in 2023